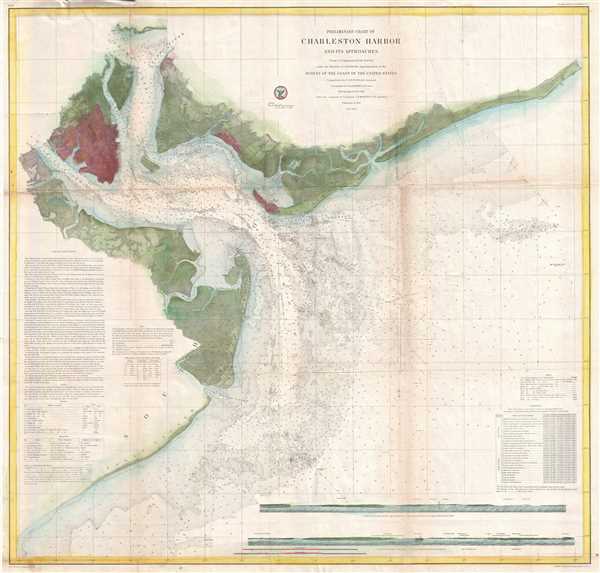 This is a highly desirable and uncommon 1856 U.S. Coast Survey chart or map of Charleston Harbor, South Carolina. It covers from Charleston south to Folly Island and east as far as Long island. Offers stunning inland detail identifying roads, farms, landings, and many individual buildings. Shows a detailed street grid for Charleston city noting docks and some commercial buildings. Places Hog Island, Drum Island, Shutes Folly Island, Morris Island, Sullivan's Island, Long Island and James Island. Nautically this map offers a wealth of practical information for the Mariner, including countless depth soundings and notes on light hoses, tides, shoals, and other undersea dangers. In the lower right quadrant there is a coastal view of North Channel with Fort Sumter.

The Triangulation for this chart was completed by C. O. Boutelle. The topography is the work of S. A. Gilbert. T he hydrography was completed by a party under the command of J. N Maffitt. This chart was compiled under the supervision of A. D. Bache, one of the most influential Superintendents in the history of the Coast Survey. Published in the 1856 edition of the Superintendent's Report.

Bache, A. D., Report of the Superintendent of the United States Coast Survey, Washington, 1856.

Very good. Minor wear and toning along original fold lines. Minor spotting and creasing at places.
Looking for a high-resolution scan of this?