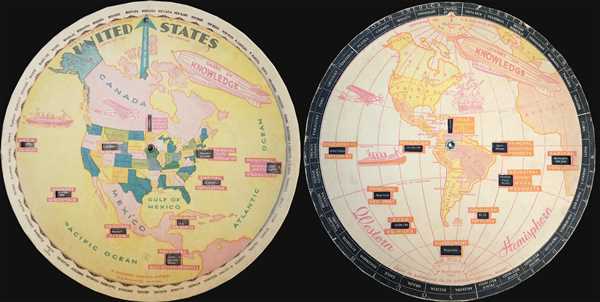 Interactive spinning-wheel maps detailing the United States and the countries of the Western Hemisphere!
$400.00

This is a rare 1931 double-sided S. G. Bocholtz and Chart of Knowledge spinning wheel map of the United States and the Western Hemisphere. The map of the United States depicts from Alaska and the Arctic Ocean to northern South America and from the Pacific Ocean to the Atlantic Ocean. All 48 states in the continental United States are labeled, some of which are abbreviated. Each state is shaded a different color, allowing for easy identification. The names of the states are also present along the edge of the disk. As the central disk spins, information about each of the states appears in the windows cut into the disk. The information provided about each state includes the state’s rank in population, when it became a state, the population of the state, the state capital and its population as well as the state’s principal city and its population, the principal mining and manufacturing products produced in the state, the population per square mile and the principal agricultural products produced in the state. A blimp in the upper portion of the map bears the title Chart of Knowledge. A plane and a ship are also illustrated.

On the verso, a map depicting the Western Hemisphere is present. This map depicts from North and South America across the Atlantic Ocean to Europe and Africa, although no locations in either Europe or Africa are labeled. In the Western Hemisphere, nearly all of the countries are labeled, although most of the Lesser Antilles are not illustrated, as their location is take up by one of the informational windows. In the larger countries (which appears to be the majority, with the exception of some of the Caribbean islands and Central American nations), capitals and other major cities are labeled, including Ottawa, New York, Los Angeles, San Francisco, Seattle, Quito, Mexico City, Santiago, Lima, and Bogota. Here, the countries of North America, South America, Central America, and the West Indies ring the central disk. Information provided by the windows includes the year discovered or settled, the principal agricultural, mining, and manufacturing products, who discovered the country, its population, capital, area in square miles, and principal sea port. The countries of the Lesser Antilles which are not illustrated to appear in the outer ring. The blimp, plane, and ship illustrated on the United States map appear here as well and are accompanied by a sailing ship, the Santa Maria, possibly the one used by Christopher Columbus when he discovered the New World.

This map was produced by The Chart of Knowledge Company and S. G. Bocholtz in 1931.

Very good. Light wear. Western Hemisphere map on verso.
Looking for a high-resolution scan of this?