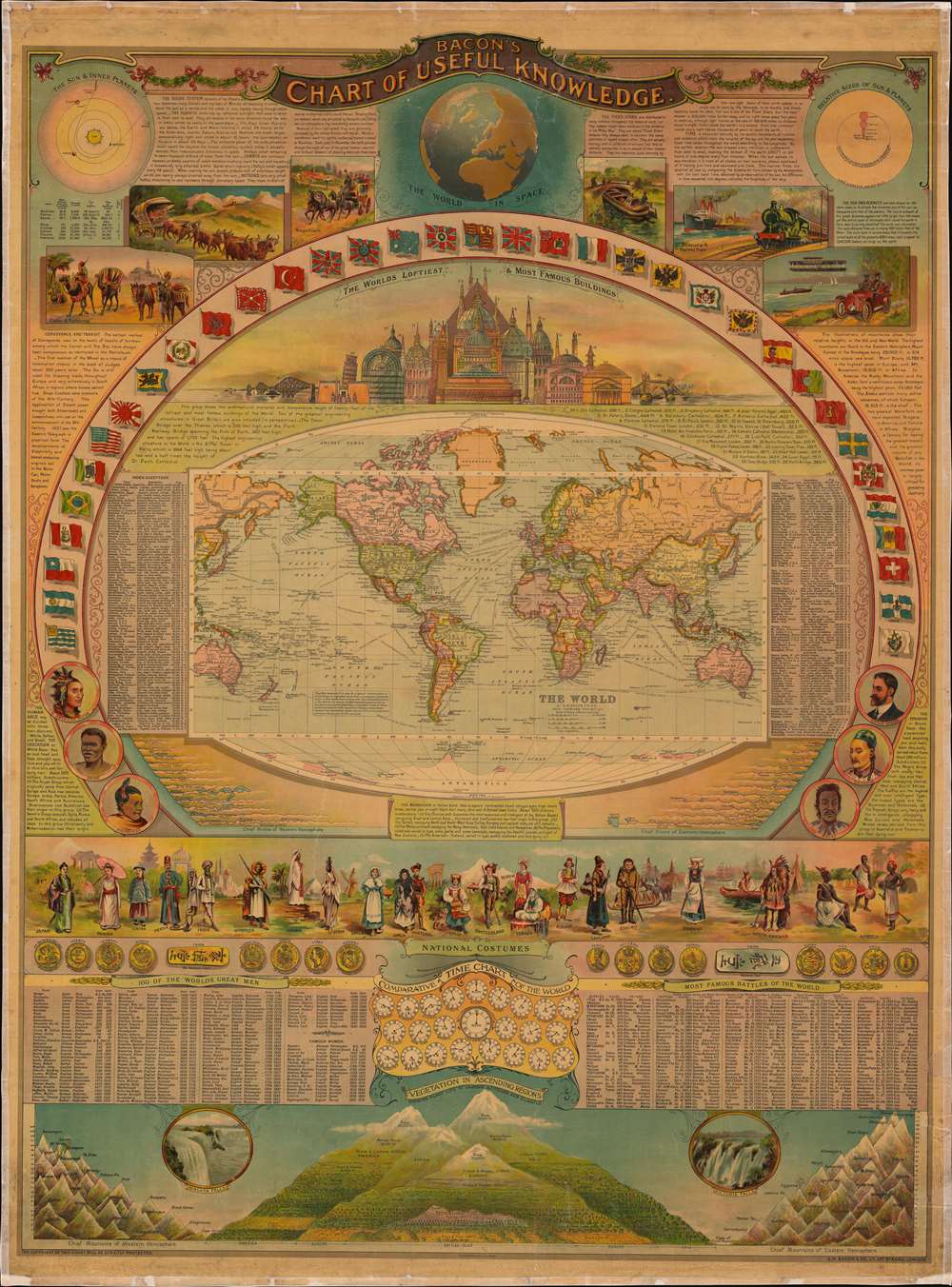 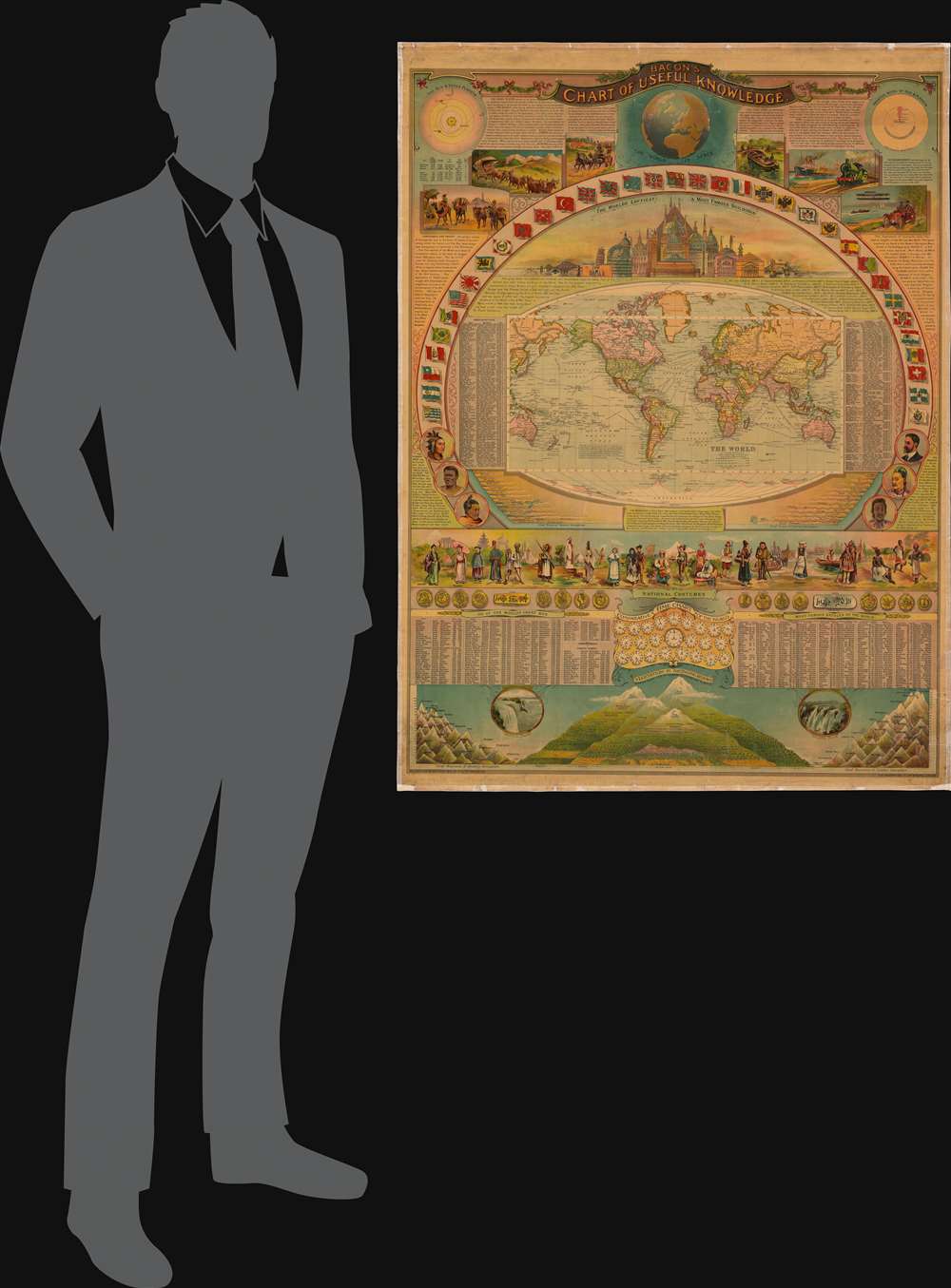 This is George W. Bacon's striking wall-map style compendium of all 'useful knowledge' - a densely informative chromolithographic masterpiece. Bacon's map/chart emerges out of the great age of data collection - a period following the Age of Discovery in which improved transportation and intellectual optimism encouraged a furious effort to catalog, 'collect', and contextualize the natural world. The present map synthesizes these efforts into a single dense infographic aimed at both the next generation of explorer/scientists and the armchair adventurer. Herein, information is effectively summarized and categorized, embracing an impressive range of subjects: astronomy, geography, transportation, ethnology, geology, anthropology, and more.

The chart's focal point is the world map at center. The map presents the world on a Mercator projection with countries, trade routes, distances, and other detail defined. It is surrounded by the flags of numerous nations, as well as a comparative chart of twenty-four man-made structures, and another of rivers of the Eastern and Western Hemispheres.

Short 'ethnographic' discussions appear to the left, right, and immediately below this central panel, with six portraits of the 'races of man'. A panel presenting national costumes appears below.

The chart continues with illustrations of some of the world's coinage with exchange rates to British pounds. A table listing '100 of the World's Great Men' from Homer to Cecil Rhodes occupies the left portion of the sheet below the currency and is followed by a list of seventeen famous women. Both are decidedly Anglo-centric. A similar chart lists the 'Most Famous Battles of the World' from the Battle of Troy to the 1905 Battle of Tsushima. A 'comparative time chart of the world' relative to Greenwich separates the two tables.

A comparative chart of the heights of the world's tallest mountains occupies the bottom part of the chart. The chief mountains of the Western and Eastern Hemispheres appear in the left and right, respectively, with each peak identified by name. At center, a diagram presents plant life at various altitudes.

At the top of the sheet, diagrams and a short text focus on the solar system. The diagram in the upper left illustrates the inner solar system, presenting Mercury, Venus, Earth, and Mars' orbits around the Sun. A chart comparing the size of the eight planets and the Sun occupies the top right. An illustration of the Earth as a planet appears at top center.

Below the discussion of the solar system are six vignettes illustrating modes of transportation. These progress from camels and donkeys to ox-drawn wagons and stagecoaches, ending with steamships, steam engines, automobiles, and airplanes. A short discussion of these 'conveyances' appears along the left border.

This c. 1912 chart was created and published in England by George W. Bacon. This chart does not appear in OCLC or any other institutional collection. Rare.

Very good. Full professional restoration. Area of infill to title cartouche no effecting lettering. Small areas of loss along top and bottom margins where once attached to rollers.
Looking for a high-resolution scan of this?