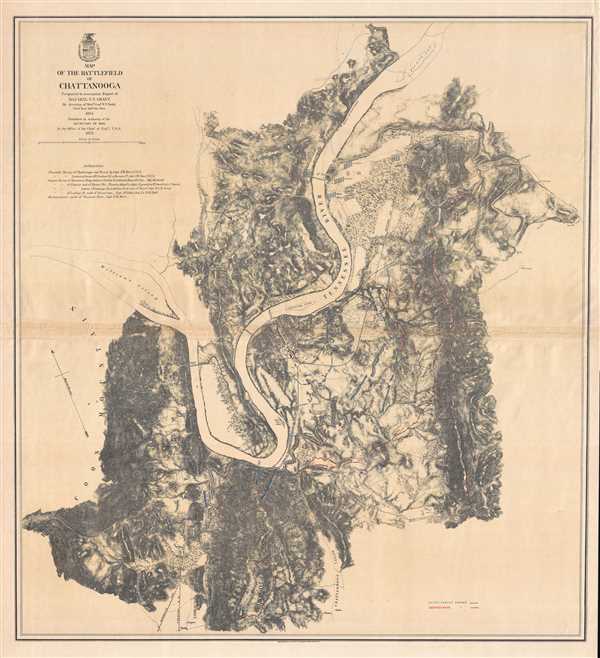 This is an 1875 William Farrar Smith map of the Chattanooga Campaign, a series of battles around Chattanooga, Tennessee in late November 1863. Centered on Chattanooga with the Tennessee River snaking its way past the city, the map depicts the region from William's Island and Raccoon Mountain to east of Missionary Ridge and from Friar's Island to Lookout Mountain. Chattanooga was a key rail hub connecting Nashville, Knoxville, and Atlanta. Union positions occupied by Generals Thomas, Sherman, and Hooker are illustrated and labeled, along with Confederate earthworks and each unit's individual commander. The area's railroads are illustrated and labeled as well, and the topography shown by hachure

The Chattanooga Campaign was a series of three major battles between Union forces trying to break out from the siege of Chattanooga set by Confederate General Braxton Bragg following his victory at the Battle of Chickamauga in September. Commanded by Union Major General Ulysses S. Grant in an effort to break the siege, these battles, one led by General Hooker at Lookout Mountain, one led by General Thomas at Missionary Ridge, and one led by General Sherman, also at Missionary Ridge, pushed back General Bragg's Confederate troops and won a series of victories that led to the retreat of Bragg's army. These victories secured Union control of Chattanooga and opened the way for General Sherman's Atlanta Campaign and his famous (and infamous) March to the Sea.

This map was created under the direction of General William Farrar Smith and published by the Army Corps of Engineers in 1875.


Graphic Company (1872 - 1890), or The Graphic Company, was a New York City based printing house based in New York City in the latter half of the 19th century. The company was founded by the brothers James H. Goodsell and C. M. Goodsell. The Goodsell Brothers were born in Michigan and for a time ran a printing business in Chicago which they lost during the 1871 Great Chicago Fire. They moved to New York in 1872, drawing investors and founding The Graphic Company with $500,000 USD in investment capital, much of it from Canada where the company was traded. Among their investors were the prominent Republicans Alexander Robey 'Boss' Shepherd and General Benjamin Franklin Butler. It was originally created as a newspaper, The Daily Graphic, but quickly expanded to other forms of printing. In 1873, they concocted a publicity stunt to build a giant branded balloon to send aeronauts John Wise and Washington H. Donaldson across the Atlantic in just 60 hours – an attempt which ended in disaster in a Connecticut farm field, just 120 miles from its starting point. By 1874, The Graphic Company advertised as general lithographers, engravers, and power press printers, with specializations in commercial lithography (stock certificates, checks, notes, etc), presentation cards, chromolithography, and photo-lithography. Within a year they had become a large and successful printing house, largely due large government printing contracts that may have been dubiously obtained, possibly through investors Sherman and Butler. In 1878 they introduced an additional periodical, The Weekly Graphic. The Goodsells sold their shares in The Graphic Company by at least 1886. By 1888 the company had changed its name to the American Graphic Company. In 1889 it advertised as the Graphic Publishing Company. For most of its time in operation the company was located at 39-41 Park Place, New York. The firm was dissolved by court order in March of 1890. The Goodsell Brothers were also, from 1872, publishers of the Financier, a successful financial journal based at 156 and 158 Broadway, and the Insurance Spectator.