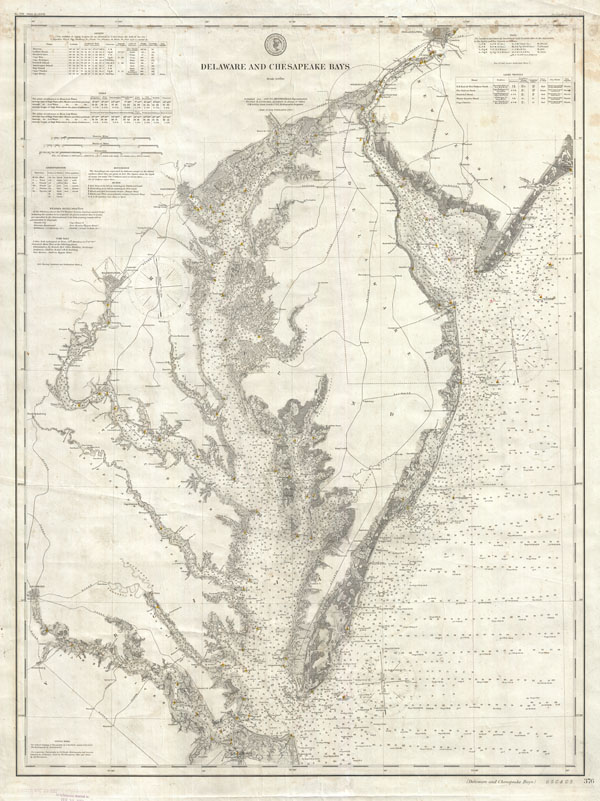 A rare 19th Century Nautical Chart of the Chesapeake Bay.

This is a rare example of the 1893 U.S. Coast Survey Map or Nautical Chart of the Chesapeake Bay and Delaware Bay. This chart is based on survey work initiated in 1855 and has been updated to 1893. Covers from Philadelphia south as Cape Henry and Norfolk. Includes both the Chesapeake Bay and Delaware Bay in full, as well as significant portions of the Potomac River, Rappahannock River, York River, James River, Patapsco River, and Patuxent River. Includes the major centers of Philadelphia, Washington D.C., Wilmington, Baltimore, and Richmond. Offers stupendous detail both inland and at sea. Notes all major railroads, communities, and shoreline features. Nautically, this map really shines. There are thousands of depth soundings, shading for undersea shoals and other dangers, and red and yellow color coding for buoys, light ships, and lighthouses.

This chart is not to be confused with the similar folded charts that are commonly issued in the Annual Report of the Superintendent of the Coast Survey. Rather it is an independently issued chart on heavy stock. It has never been folded. Most likely this chart has actually been used to sail. Such charts are much less common and far more desirable than the folded Report charts. This map was published by the United States Coast and Geodetic Survey as chart no. 376 under the supervision of T. C. Mendenhall.

Good. Some minor soiling along top margin. Minor cosmetic damage near Philadelphia. We considered having this map professionally cleaned and flattened, but find that it is quite nice as is. However, this service remains an option for the buyer. On thick stock.

Swem, E. G., Maps Relating to Virginia in the Virginia State Library and other Departments of the Commwealth with the 17th and 18th Century Atlas-Maps in the Library of Congress, 1561.
Looking for a high-resolution scan of this?