1857 U.S. Coast Survey Chart or Map of the Chesapeake Bay 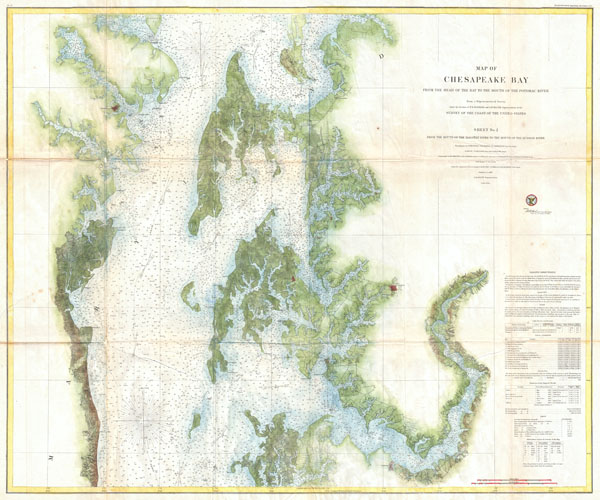 1857 U.S. Coast Survey Chart or Map of the Chesapeake Bay

This is an attractive 1857 U.S. Coast Survey chart or nautical map or the central part of the Chesapeake Bay, Maryland. This is chart no. 2 of the three charts created to detail the entire Chesapeake Bay. Covers from roughly 38.35 degrees north latitude to the mouth of the Potomac River. Includes the cities of Annapolis, Cambridge, and Easton, among others. Notes Kent Island, Oxford, Low's Island, Sharp's Island, Choptank River, Cambridge, Herring Bay & Holland Point. Detailed sailing instructions tidal information, and notes on light houses in the lower right quadrant. Based on a trigonometrical survey produced under the direction of F.R. Hassler and A.D. Bache. Engraved by Lang and Lang of 66 Fulton Street, New York, for the 1857 edition of the Surveyor General's Report …

Maryland State Archives, Huntingfield Map Collection, # 357U3.
Looking for a high-resolution scan of this?