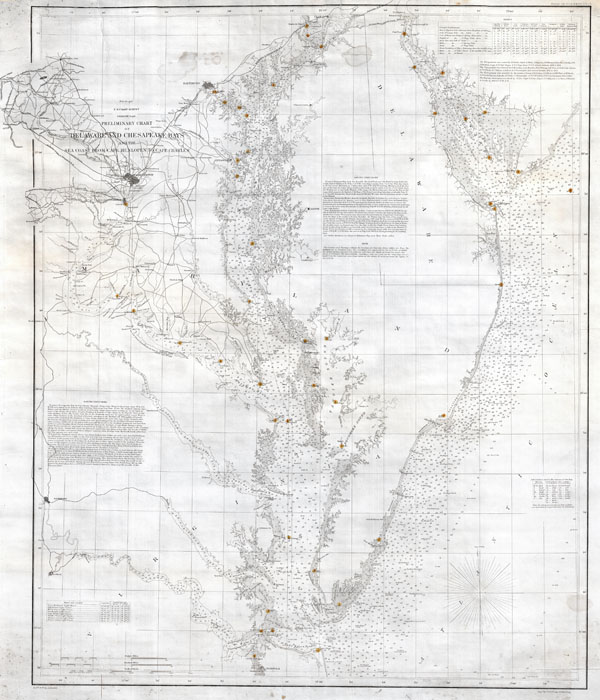 A particularly beautiful example of this important nautical chart if the Chesapeake Bay.

An exceptional example of the 1855 U.S. Coast Survey's progress chart of the Chesapeake Bay and Delaware Bay. Covers the Bay from the mouth of the Susquehanna River southwards as far as Cape Henry and Norfolk. Includes both the Chesapeake Bay and Delaware Bay in full, as well as small portions of the Potomac River, Rappahannock River, York River, James River, Patapsco River, and Patuxent River. Identifies Washington D.C., Harper's Ferry, Alexandria, Cape May, Charleston, Baltimore, Annapolis, Chestertown, Easton, Cambridge and Norfolk. The map identifies buoys, lights, and offers thousands of depth soundings. Detailed sailing instructions appear at the center of the map. This map is based upon a smaller chart issued for inclusion in the Superintendent's annual Report, however, has been expanded in the direction of Washington D.C. such that the map overlays the original title area. As a separately issued nautical chart this map was printed heavy paper backed with linen.

Very good condition. Issued on thick paper and backed with linen.
Looking for a high-resolution scan of this?