1885 Cram Map or Plan of the City of Chicago, Illinois 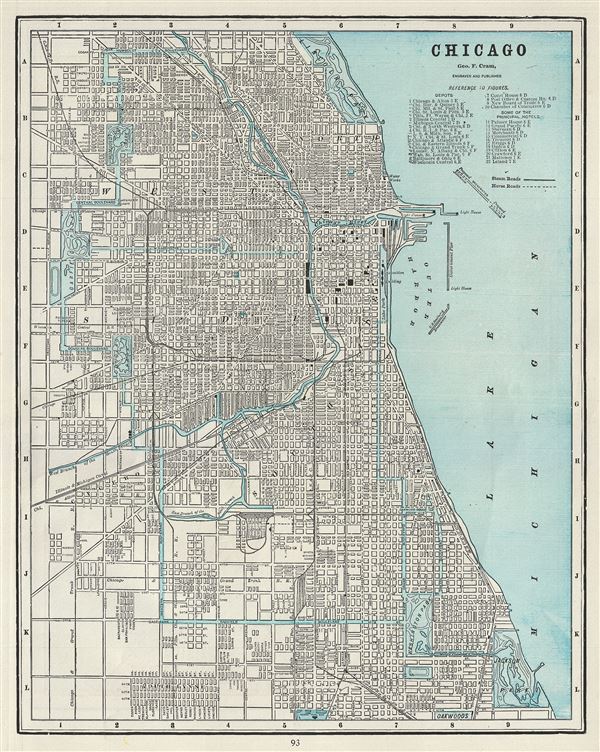 1885 Cram Map or Plan of the City of Chicago, Illinois

This is an attractive 1885 map or city plan of Chicago, Illinois, issued by George F. Cram. It covers the city from Lincoln Park south as far as Jackson Park and from Garfield Park east as far as Lake Michigan. This highly detailed map notes parks, piers, lakes, railroads, steam and horse roads, and an assortment of other topographical details. Individual streets and buildings are identified.

Selected as a railway hub for most of the American Midwest, Chicago was undergoing a boom period and would soon draw the world's attention as the site for the 1893 Chicago World's Fair, or as it is better known, the Columbian exposition. The map identifies Jackson Park, the location selected for the fair. It also illustrates the Chicago Park System. The 'Park System,' designed by Olmsted prodigy William Le Baron Jenny in 1871, refers to a network of parks and garden boulevards intended to embrace the city in arms of foliage. Many of these parks and boulevards remain today.

A key in the upper left quadrant includes a reference to the figures in the map. Verso features a map of the city of Milwaukee and Bay View, Wisconsin. This map was published and engraved by Geo. F. Cram in 1885.

George Franklin Cram (May 20, 1842 - 1928) was an American map publisher active in the late 19th and early 20th centuries. During the American Civil War, Cram served as a staff cartographer for the Union General Ulysses S. Grant and participated in Sherman's 'March to the Sea'. In 1867, after being discharged from the army George Cram moved to Chicago, where he founded 'Blanchard and Cram' with his uncle Rufus Blanchard Evanston. Blanchard and Cram was a supply house for the book trade - though he also published a few maps during this period. This short lived business was destroyed in the 1871 by Great Chicago Fire. After the fine, recognizing a business opportunity in the burgeoning railroad industry, Cram reinvented himself as cartographic publisher, opening the Cram Map Depot. Like fellow Chicago publisher Rand McNally, Cram took advantage of economical wax engraving processes to inexpensively produce maps in vast quantities. His signature publication, the Unrivaled Atlas of the World became the world's best -selling atlas and was published from the 1880s to 1952. On retiring in 1821 Cram sold his company to E. A. Peterson of the National Map Company (Scarborough Company). Peterson moved the company to Indianapolis where, following Cram's death, he rebranded the National Map Company as the George F. Cram Company, surely thinking to capitalize on the established identity of the firm. In 1930 he entered the globe market for which the firm was best known from the mid-20th century. In time the firm expanded globally passing becoming a major concern. By 2012, however, they were out of business.

Very good. Map of Milwaukee on verso.
Looking for a high-resolution scan of this?