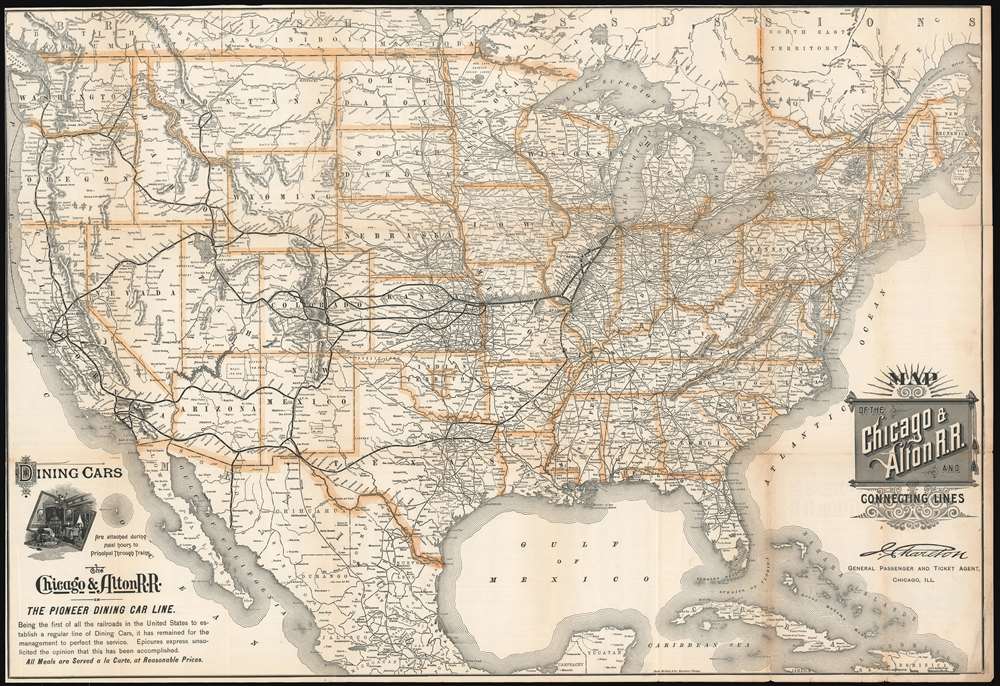 This is an 1898 Rand McNally map of the United States published for the Chicago and Alton Railroad. The Chicago and Alton's main line from Chicago to Alton, Illinois (on the Missouri River) and its extensions to St. Louis and Kansas City are boldly highlighted in black. Each stop along these lines are labeled. The major stops, Springfield, Bloomington, Peoria, St. Louis, and Kansas City, are identified. Connection on the Union Pacific, Missouri Pacific, Atchison, Topeka, and Santa Fe, and Southern Pacific Railroads are highlighted in bold. Innumerable other railroads are also illustrated.

The terms 'Unassigned Lands' and 'Oklahoma Country' were used interchangeably in the 1880s to describe the last parcel of land not 'assigned' to an Indian tribe in the Indian Territory (the modern-day state of Oklahoma). In 1879, in an article in the Chicago Times, mixed-blood Cherokee Elias C. Boudinot became the first to use of the term 'Unassigned Territory' in popular usage. The boundaries of his 'Unassigned Territory' were established by treaties signed between the United States and various Indian tribes. All in all, the 'Oklahoma Country' covered approximately 2,950 square miles. Five rivers crossed the territory, timber was plentiful, and in 1866 the Santa Fe Railway laid their north-south line through the 'Unassigned Lands'.

'Sooners' and the Oklahoma Land Run

By 1880, so-called 'boomers' (white settlers) started trying to stake claims in 'Oklahoma Country' but were generally evicted by the U.S. cavalry. In 1889, Congress passed an amendment to the Indian Appropriations Act of 1871 allowing white settlement in the 'Oklahoma Country' beginning with an April 22 'land run. This became the famous 'Land Run of 1889', the first land run in the territory's history, and the legend of the 'Sooners' (those who entered the Oklahoma Territory before noon on April 22) was born.

The Chicago and Alton Railroad

This map was created and published by Rand McNally for the Chicago and Alton Railroad in February 1898. Two examples are cataloged in OCLC and are part of the institutional collections at Harvard University and the Kansas City Public Library.