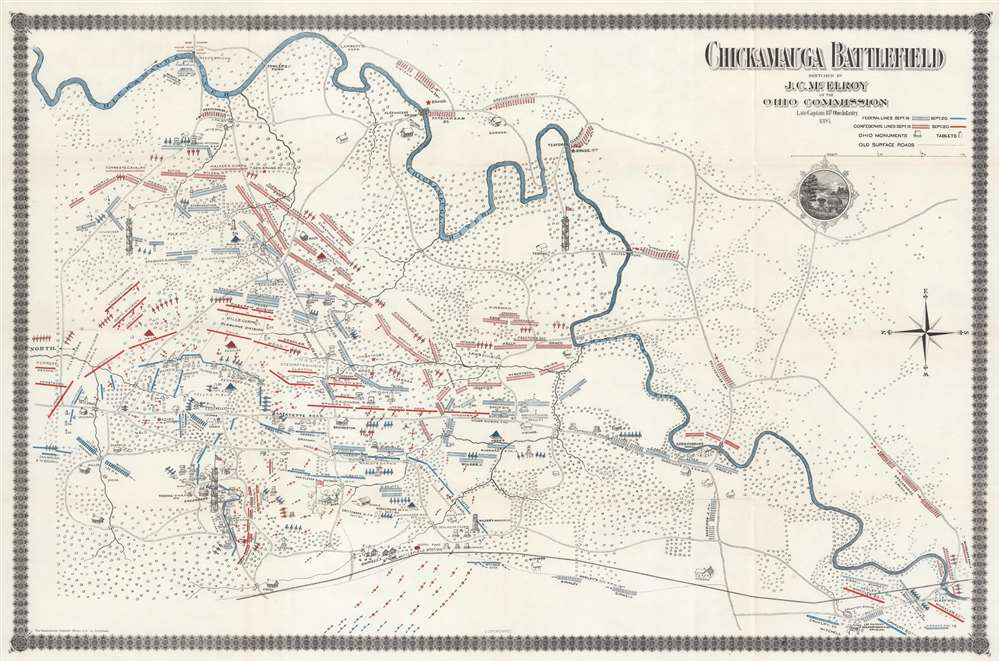 This is an 1895 Joseph C. McElroy map of the Battle of Chattanooga, American Civil War (1861 - 1865). Federal (blue) and Confederate (red) lines on September 19 and September 20 are marked, with each unit identified by its commanding officer. Artillery batteries appear as cannons. As this map was created after the war for the Ohio Commission, monuments to various units are illustrated as well.

The Battle of Chickamauga

The Battle of Chickamauga (September 18 - 20, 1863) was fought in northwestern Georgia between the Union Army of the Cumberland under the command of Major General William Rosecrans (1819 - 1898), and the Confederate Army of the Tennessee under General Braxton Bragg (1817 - 1876). Before Chickamauga, Rosecrans won several victories in the Tullahoma Campaign, including successfully forcing Bragg's Confederates out of Chattanooga, Tennessee. In an unconventional move, Rosecrans divided his forces to pursue the fleeing Bragg. Bragg set up a trap for the perusing Union forces, but incompetence among his subordinates caused the trap to fail. On the Union side, Rosecrans, realizing his army narrowly escaped the trap, consolidated forces and withdrew to Chattanooga. In the meantime, Confederate reinforcements bolstered Bragg's ranks, giving him a numerical advantage. After days of maneuvering as each side postured for a tactical advantage, the Battle of Chickamauga was fought from September 18 to September 20, 1863. On the 20th, Rosecrans was misinformed that a gap opened in his front line. In trying to fill the fictional gap, he created a factual gap directly in front of the charging Confederate force. A third of the Union Army was routed in a single charge. Although Union forces rallied and closed the gap, the battle was lost. That evening, chastised Union forces returned to Chattanooga and the pursuing Confederates took the high ground around the city, commencing a siege that lasted until November 23, 1863. The siege was not broken until the Chattanooga Campaign, led by General Ulysses S. Grant. Grant's victories forced Bragg's Army of Tennessee into retreat and opened the way for General William T. Sherman's 1864 Atlanta Campaign.

The 18th Ohio Volunteer Infantry was organized at Athens, Ohio, between August 1 and September 28, 1861. From November 1861 through December 1862 the 18th Ohio was on guard duty or on reconnaissance missions. The unit saw their first major action at the Battle of Stone's River (December 30, 1862 - January 3, 1863). They then returned to guard duty before taking part in the Chickamauga Campaign and the Battle of Chickamauga (September 18 - 21, 1863). Afterwards, the 18th Ohio endured through the Siege of Chattanooga (September 24 - November 23, 1863). After the siege, they remained in Chattanooga until being mustered out on November 9, 1864.

This map was created by Joseph C. McElroy for publication in his book Chickamauga: Record of the Ohio Chickamauga and Chattanooga National Park Commission published in 1896. The book is well represented in institutional collections but examples in good condition accompanied by the map are scarce. Ten examples of the separate map are cataloged in OCLC.

Joseph Charles McElroy (April 23, 1831 - August 21, 1907) was an American businessman and American Civil War veteran. Born in Oak Grove, Ohio, McElroy left for California in 1849 to seek his fortune in the California goldfields. In the 1850 census, he lists himself as a miner in Louisville, California. In 1861, he raised a militia company at Racine, Ohio, and enlisted in Company K of the 18th Ohio Volunteer Infantry of the Union Army as a 1st Lieutenant. He was promoted to Captain on January 4, 1863 and mustered out of the army on November 9, 1864. After the war, McElroy served as Sheriff of Meigs County, as a member of the racine Village Council, and as a member of the Ohio General Assembly. He acted as the Secretary Treasurer of the Ohio Commission for the Chickamauga Battlefield National Park and served as the Postmaster of the U.S. House of Representatives for fourteen years. Learn More...


Adolph K. Krebs (1831 – September 15, 1884) was a Cincinnati, Ohio, lithographer active in the second half of the 19th Century. Born in Germany, Krebs came to Cincinnati with his family in 1847. After arriving in Cincinnati, Krebs worked as an apprentice at Sherer and Rowse in the late 1840s. He then moved to Klauprech and Menzel and worked there until 1852. That year he moved to Pittsburgh to start a lithographic firm with his younger brother Otto. Krebs fought in the American Civil War, was captured, and imprisoned at the infamous Andersonville prison. After the Civil War, Krebs returned to Cincinnati. Krebs joined Ehrgott and Forbriger (after Peter E. Ehrgott and Adolphus F. Forbriger) in 1869 following the death of Adolph Forbriger. The firm operated under the name Ehrgott and Krebs from 1870 until 1873. Krebs became sole owner of the firm in 1874 after Peter Ehrgott retired. That year he renamed the firm Krebs Lithographic Company, and built a large new facility. Krebs took on partners William D. Henderson (1842 - 1920), and F. Veigel but maintained overall ownership and management of the company. Under Krebs the firm reached new heights, producing both lithographic and chromolithographic items, including bonds, checks, diplomas, drafts, maps, and views. The Cincinnati firm was based in the Carlisle Building, where, at their largest, they occupied two full floors. Henderson left the firm in 1885 to form his own company with Fred Achert (1847 - 1928), the Henderson-Achert Company. In 1890, a fire destroyed the Henderson-Achert Company. Henderson chose to buy the Krebs Lithographing Company instead of rebuilding his own firm. He renamed the firm Henderson-Achert-Krebs and installed Achert as vice president. Achert left the firm in 1896 to found his own firm, the Achert Lithographic Art Company. After Achert left, the firm was renamed the Henderson Lithographic Company. Strobridge purchased the company in 1925 but the Henderson name remained until the late 1930s. Learn More...


Frederick Achert (August 25, 1847 - April 2, 1928) was a German-American lithographer. Born in Baden-Baden, Germany, he arrived in the United States in 1862 and became a naturalized citizen in 1868. Achert operated his own lithographic firm from 1878 until 1885 and then he joined Willaim D. Henderson (December 31, 1845 - May 5, 1920) to form the Henderson-Achert Company in 1885. A fire destroyed the Henderson-Achert Company in 1890, and Henderson decided to buy the Krebs Lithographing Company instead of rebuilding the old firm. After the acquisition, Achert was made vice president of the new firm, which was called Henderson-Achert-Krebs. Achert left Henderson-Achert-Krebs in 1896 to firm his own firm, the Achert Lithographic Art Company, which was apparently also known as Achert and Henckel, and this firm operated until 1908 when the Monarch Lithographic Company purchased it. After the purchase, Achert used his reputation as 'one of the best lithographic sketch artists the country ever had' and opened the Achert Bureau of Design, a lithographic design service, which operated for a few years. Learn More...