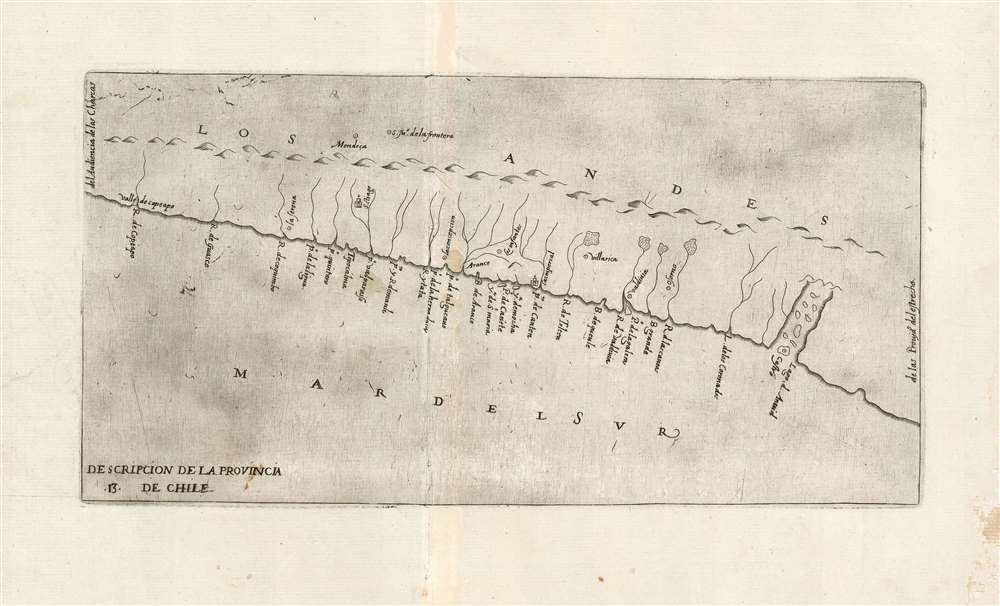 This is the extremely rare 1601, Madrid, first edition of Antonio Herrera y Tordesillas' map of Chile: the first map specifically focused on Chile, and the first to be printed in Spain. Indeed, this is one of the very few early officially-sanctioned Spanish maps of any part of the New World: Spain for the most part maintained a strict policy of secrecy regarding its discoveries in the Americas. This map was included in Herrera's 1601 Descripcion de las Indias Occidentales, the geographical supplement to Herrera y Tordesillas' history of the Spanish exploration of the Americas.

This map was based on the manuscript charts of Juan López de Velasco, who between 1571 and 1591 was Chief Cosmographer and Chronicler of The Indies under Philip II, and who systematized the process of fact-gathering for Spain's sweeping empire in the New World. Although political infighting and demands for secrecy prevented Velasco from publishing a history, his charts remained the best available when Herrera y Tordesillas finally produced such a work in 1601. Thus, despite Herrera y Tordesillas not having ever been to the Americas, all his maps - including this one - contain valuable geographical information collected by the Spanish in the administration of their colonies. Interior details remain sparse, perhaps due to Spanish concerns of secrecy. The map is oriented to the east, naming the Pacific 'Mar Del Sur' at the bottom; inland, the Andes mountains are named, and portrayed pictorially. The map shows and names twenty-four river mouths and bays along the coast, although the courses of rivers are in some cases confused: the Biobío River, for instance, is not named, though the Bay of Arauco (Aranco) does appear. The map names the Valle de Copiapo, and the colonial cities of La Serena (founded 1544), Santiago (1541), La Conception (1550), La Imperial (1552), Villarica (1552), Valdivia (1552) and Osorno (1553). Castro (1576), in the Los Lagos region, appears as well. Beyond the Andes, the Argentinian cities of Mendoza (1561) and San Juan de la Frontera (1562) are both noted.

A full quarter of this map of Chile, from La Concepción to Valdivia, can be considered a map of the theatre of the Arauco War (1536 - 1810), an active conflict of that had already consumed some sixty years in which indigenous Mapuches resisted Spanish conquerors' attempts to enslave them. The Spanish, seeking to exploit Mapuche labor in mining gold in the Arauco region, had attempted to repeat successes at harnessing local conventions of servitude in other regions, such as the Andean Mit'a. The Mapuche, lacking such traditional slavery, resisted. The result was a long, drawn-out multi-phase war so costly in Spanish lives that it became known as the Flandes indiano (Indian Flanders), in reference to the interminable Dutch war for independence from the Spanish, later known as the Eighty Years' War (1566 - 1609).

The Arauco War would reach a turning point after the 1598 Battle of Curalaba in 1598. This stinging defeat of the Spanish was followed by the so-called 'Destruction of the Seven Cities': the razing or abandonment of Spanish settlements south of the Biobío River, which process was still underway at the time this map was printed. Of the cities shown on this map, Valdivia, Los Infantes, La Imperial, and Villarica were all abandoned or destroyed by the time this map was printed. Osorno and Araucan would follow in a few years. Spanish survivors in the south fled to the island of Chiloé, where the fortifications around the city of Castro afforded protection. (Castro, founded in 1576, remains Chile's third oldest city in continuous existence.) Curalaba led to the establishment of a clear frontier between Spanish domains in Chile and independent Mapuche territory.

This map is rare. Only three separate examples of this Madrid printing of the map are catalogued in OCLC, appearing in the British Library, the National Library of Australia, and the John Carter Brown. A 1623 editions by DeBry and Hulsius, and a 1723 Torquemada edition are more easily found.

Antonio de Herrera y Tordesillas (1549 - March 28, 1626 or March 27, 1625) was a chronicler, historian, and writer of the Spanish Golden Age. He authored what is considered one of the best contemporaneous works written on the conquest of the Americas - despite never having lived or visited any part of them. As Chief Chronicler of Castile and the Americas during the reigns of Philip II and Philip III he would become one of the most prolific historians of his era. This is not to say that he was among the best. The Diccionario de historia de España, described him as an opportunistic, greedy, scheming plagiarist: not notably desirable qualities in a historian. For a courtier, these prove to be essential traits, and they served Herrera y Tordesillas well. His youthful connections would eventually bring him under the service of the Italian Prince Vespasiano I Gonzaga, to whom he became a most trusted aide. Herrera successfully leveraged this position to expand both his circle of friends and his personal wealth, and the relationship would lead to the introduction to King Philip II which made the rest of his career. His massive output ensured that he had constantly new opportunities to dedicate works to powerful potential patrons. Herrera y Tordesillas' cartographic contributions are largely contained in his 1601 Descripción de las Indias Occidentales, which is notable for containing some of the only maps produced during early colonization of the Americas that were derived from official Spanish sources, including the manuscript maps of Juan López de Velasco. Learn More...


Juan López de Velasco (c. 1530 - 1598) was a Spanish cosmographer and historian. He served as Spain's senior chronicler of the Indies in the second half of the century, during the reign of Philip II. He produced a number of charts of the Americas - of Guatemala, Panama, Chile and Mexico - which would provide the basis of the maps included in Herrera y Tordesillas' 1601 geography of the West Indies. He also created a 51-point rubric for the cataloguing of every town, village or city falling within Philip II's domains. Learn More...

Very good condition. Toning along centerfold, else excellent condition with a bold strike.