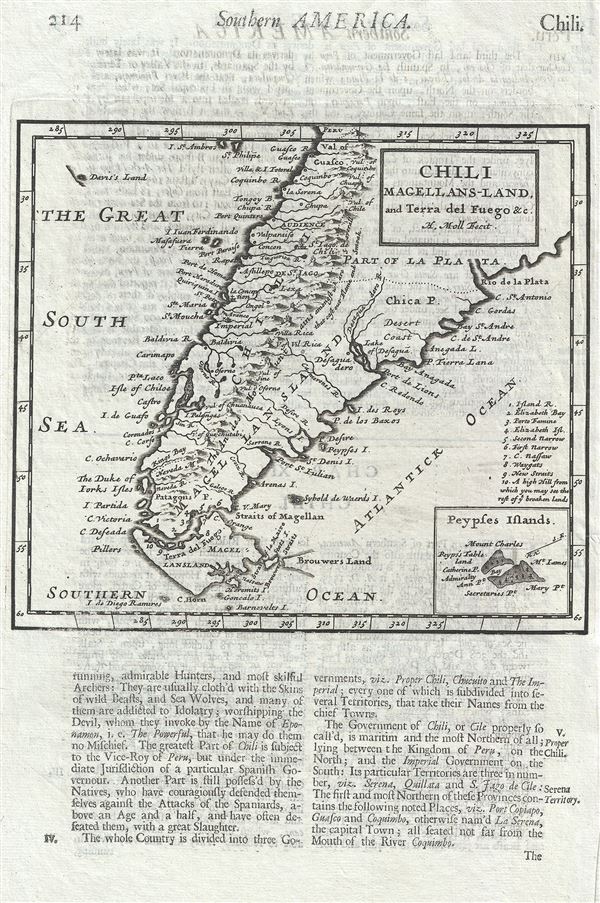 This is a beautiful 1701 map of southern South America by Herman Moll. It covers from Paraguay south to the Strait of Magellan and Tierra del Fuego, and includes the modern day nations of Paraguay, Chile, Uruguay and Argentina, with the southern portions of Brazil and Bolivia. The map renders the entire region in extraordinary detail offering both topographical and political information with the Andes Mountains beautifully rendered in profile. This map, like most early maps of the area, offers a fairly accurate mapping of both the east and west coasts with exceptional detail, while the interiors are mapped speculatively.

The Strait of Magellan is mapped in detail. Discovered in 1520 by the Portuguese sailor Ferdinand Magellan, the first explores circumnavigate the globe, this natural channel linking the Atlantic and Pacific Oceans though a challenging route to navigate -given the unpredictable winds and currents-, is the fastest connection between the two oceans. To the east of Terra del Fuego, Moll notes 'Bouwers Land.' This is most likely modern day Isla de los Estados or Staten Island, named after Hendrick Brouwer who recorded the sighting of the island in 1643.

Moll notes a speculative land mass to the west of Chile called 'Davis' Land' or Terre de Davis. Located roughly where Easter Island is today, Terre de Davis or Davis' Land was supposedly discovered in 1688 by an English navigator of the same name. Many historians argue whether or not Davis Land was actually Easter Island, but it does seem likely.

A small inset of Pepyses Islands (actually apocryphal, but bearing an uncanny resemblance to the Falklands) is included in the lower right quadrant of the map. This map was issued in Herman Moll's 1701 System of Geography.