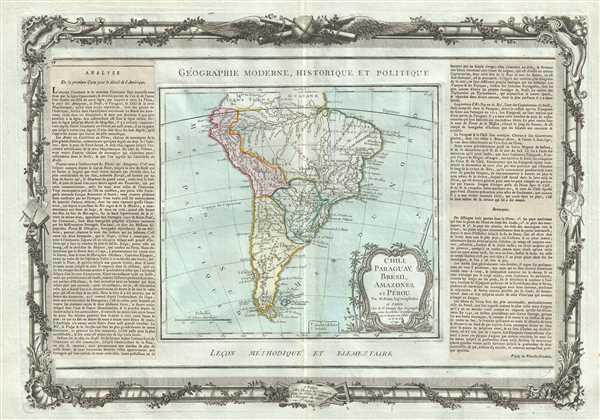 This is an attractive 1786 example of the Brion de la Tour map of South America. It extends from Guyana south to Tierra del Fuego and Cape Horn. The map renders the entire region in extraordinary detail offering both topographical and political information.

Despite several hundred years of exploration, at the end of the 18th century, much of the interior of South America, aside from the Andean coastal regions, remained largely unknown.

Perhaps the most interesting feature is the mapping of Lake Parima, near Guyana. Lake Parima was first identified by Sir Walter Raleigh in the 16th century - though he admittedly never saw the lake himself. Raleigh associated the lake with indigenous legends of Manoa and the supposed site of El Dorado. Many early maps actually show 'el Dorado' on the shores of Lake Parima, though this map curiously does not. However, the rendition of Lake Parima is vastly smaller than most previous examples from the late 18th century - even those by other English cartographers such as Laurie and Whittle – suggesting a significant advance in regional cartography.

The reality of Lake Parima and the Manoa is based upon Raleigh's misinterpretation of local trade networks. The Manoas were a river trading tribe based in the Amazon. Each year during the rainy season flooding on the Orinoco and Parima rivers would create a large flood plain and open channels of trade between the two otherwise unconnected regions. Raleigh misinterpreted these watery trade channels as a great lake and attached them erroneously to the El Dorado legend.

A beautifully engraved title cartouche adorns the bottom right quadrant of the map. To the left and right of the map are paste downs of French text with remarks and description of the map. Surrounding the whole is an elaborate decorative border featuring floral arrangements, surveying tools, elaborate baroque scalloping, and a winged globe. This map was issued as plate no. 49 in the most deluxe edition of Desnos’ 1786 Atlas General Methodique et Elementaire, Pour l’Etude de la Geographie et de l’Histoire Moderne.