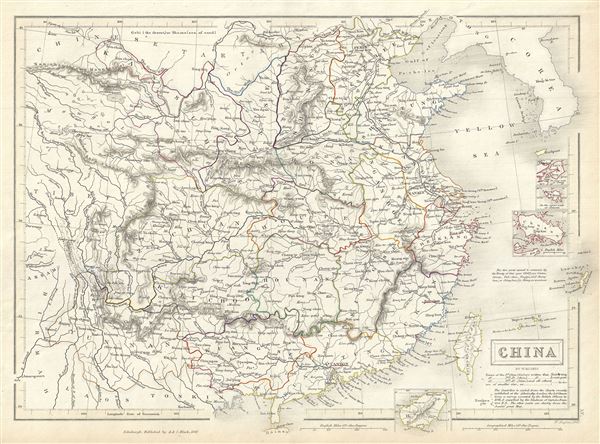 This is a fine example of Adam and Charles Black's 1844 map of China. The map covers China from the Chinese Tartary to Hainan and from Assam in India to Korea (Corea), inclusive of Formosa or Taiwan. Four inset maps detail Amoy, Hong Kong, Zhoushan and Hainan. The Great Wall of China is identified. Taiwan or Formosa is mapped vaguely, representing the poor knowledge of the region prior to the Japanese invasion and subsequent survey work in 1895. The map identifies both Hong Kong and Macao. Throughout, the map identifies various cities, towns, rivers, mountain passes and an assortment of additional topographical details.

Black's map reveals China just a after the First Opium War. In the early 19th century Asia was increasingly coming under imperial European sway. By the 1830s, oversaturation of the Chinese market slackened Chinese demand for most British products. To make up for the trade deficit, British merchants introduced Indian opium to China.   Addictive and cheap, Opium became Britain's most profitable and important crop in world markets, pouring into China faster than tea poured into Britain. Opium addiction and its attendant social ills reached such catastrophic levels that the Chinese government took action and destroyed British opium stores in Canton. As this threatened English commercial interests, the crown responded, sparking the Opium Wars of 1839-1842. The superior British forces took complete control of Canton, occupied Shanghai, and blockaded Chinese ports, forcing the Chinese to sign the 1842 Treaty of Nanking. This unequal treaty (the first of many between European powers and China) would grant Britain extensive trading rights in China.

The map is engraved by W. Hughes and issued as plate no. LV in the 1844 edition of Black's General Atlas.