1966 Map of the People's Republic of China; Cultural Revolution 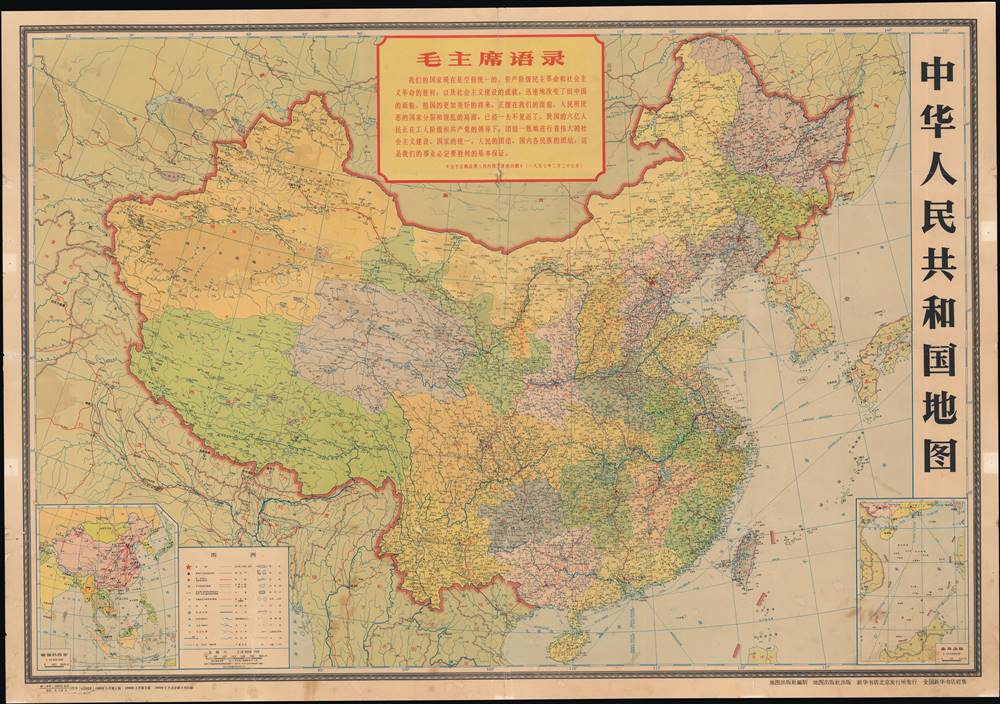 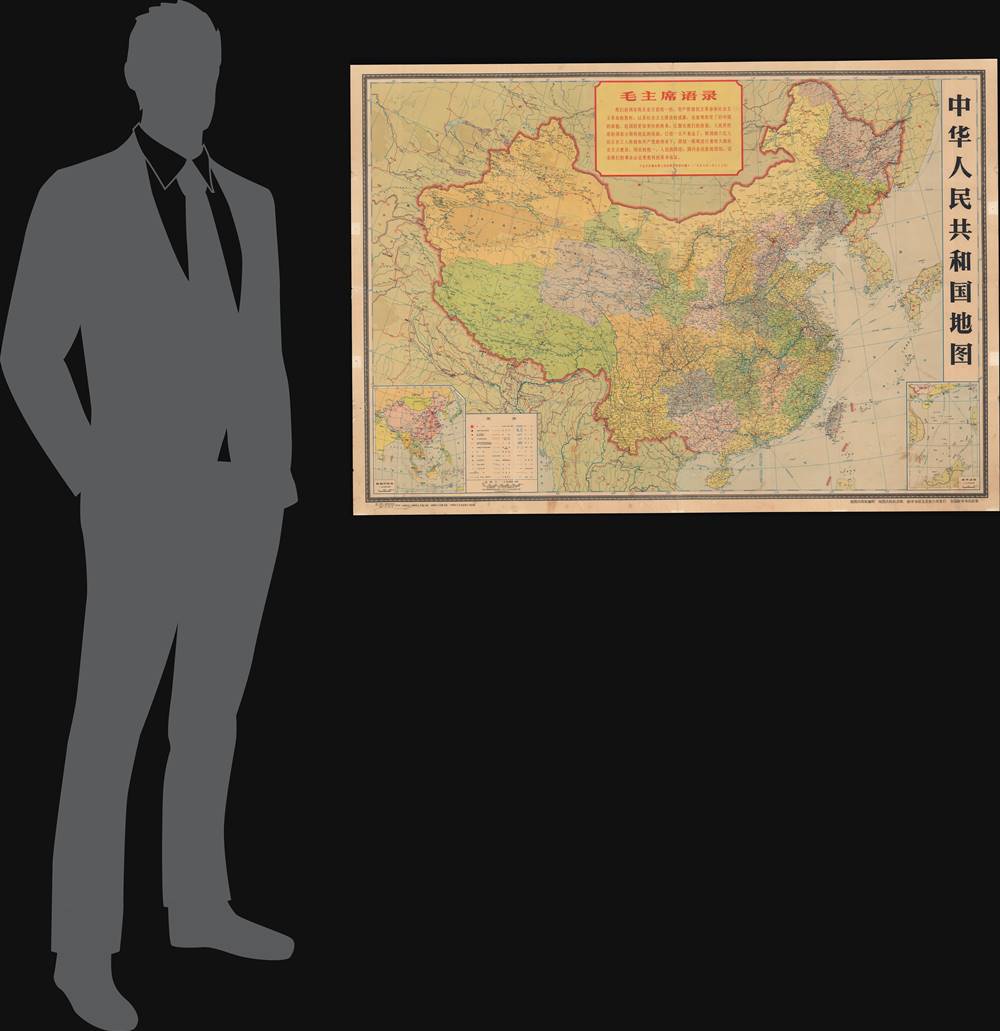 1966 Map of the People's Republic of China; Cultural Revolution

This is a rare 1966 second edition of the China Cartographic Publishing House's 1965 map of the People's Republic of China. It was published on the eve of the Great Proletarian Cultural Revolution, one of the most consequential events in modern Chinese history.

The map depicts the entire People's Republic of China, including disputed territories such as Taiwan. The territorial claims of countries that were historically friendly to Communist China, such as North Korea and Pakistan, are also reflected. The legend denotes symbols for a variety of geographic and administrative features. The revolutionary language of the coming Cultural Revolution is already evident, with administrations such as cities and provinces replaced with 'Seat of Municipal People's Committee,' 'Seat of Provincial People's Committee,' etc. (these would later be replaced by 'revolutionary committees').

At bottom-left is an inset map of East Asia, detailing China's rail network and connections with neighboring countries. China became internationally isolated at the height of the Cultural Revolution, having alienated most of the rest of the socialist world, not to mention non-aligned countries or U.S.-aligned countries, and border crossings were difficult to operate in the most chaotic phase of the campaign.

Prominently at top is a quote from the first part of Mao's famous speech 'On the correct handling of contradictions among the people' that extolls the advances made up to that point and the strengths of the Chinese revolution. The idea of contradiction is a central component of Maoism and is essentially Mao's take on the Hegelian-Marxist understanding of dialectics. This speech was originally given to a group of party leaders in February 1957, as indicated in the caption below the quote, but a revised version of the speech published in People's Daily, the Communist Party's main mouthpiece, in June 1957 had become standard by 1966. In the four months between the two versions, China underwent a domestic political shift. Mao's original speech had occurred in the context of the Hundred Flowers Movement, which was a period of relatively open debate and discussion on political issues following Khrushchev's Secret Speech and the Hungarian Revolution. But by the summer of 1957, Mao had become uncomfortable with the criticisms of the CCP and of himself and decided to launch a crackdown, known as the Anti-Rightist Campaign. Therefore, in true Orwellian fashion, the original version of the speech was removed from public circulation, purged from public memory, and replaced with the latter version that encouraged criticizing 'poisonous weeds' (that is, 'rightists').

The result of the Anti-Rightist Campaign was a silencing of dissent within the party, which contributed greatly to the disastrous Great Leap Forward. Mao had thought that intensive effort, agricultural collectivization, and targeted investment in heavy industry would allow China to leapfrog from a poor agrarian society to a developed industrial one in five years. Modelled on Stalin's first Five Year Plan in 1928-1932, the results were similar – some improvement in industry but widespread opposition in the countryside, leading to political repression and strict ideological conformity within the party, which in turn led to reluctance to report ever-worsening problems, widespread famine, and suffering.

Mao believed in the ability of ordinary people to overcome any obstacle through willpower alone. The CCP therefore set peasants with no technical training off on massive construction projects, especially dams, most of which failed within a handful of years. They also tried to boost China's steel production by having household goods melted down in backyard furnaces. However, the resulting metal was not high-quality steel but relatively useless pig iron; in the meantime, peasants had lost most of their farming tools and essential household items (such as cooking implements) while also clear-cutting forests to power the furnaces, leading to landslides, desertification, and other environmental problems. Grain was collected in state granaries, where most of it would be sent on to city-dwellers and factory workers, and the fervor of the Great Leap caused local cadres to greatly exaggerate grain production when it was actually rapidly decreasing. When starving peasants tried to horde grain or recover it from the granaries, units of the People's Militia beat or even killed them. The combination of bad policies and fear of pointing out problems ultimately led to widespread famine in the countryside, killing some 20 million people, perhaps more.

Following the famine, Mao had to take a backseat in daily administration of the country, but quickly became unhappy with the 'capitalist road' taken by Liu Shaoqi (1898 - 1969) and Deng Xiaoping (1904 - 1997) to recover from the famine. He therefore quietly plotted a counter-attack, above all by building up his personality cult, beginning with the military, led by his old comrade Lin Biao (1907 - 1971), who became Mao's de facto successor in the first part of the Cultural Revolution.

Even before the Cultural Revolution began (usually dated to August 1966), quotes from Mao became obligatory in official documents and publications, as seen here. When the campaign was at its height, the book Quotations from Chairman Mao Zedong (毛主席语录), known to foreigners as the 'little red book,' were printed to the tune of well over one billion copies and became the only politically safe book to own.

The Cultural Revolution is one of the most perplexing events in modern political history, as it was, in essence, an attack by the leader of a political system against the system itself, a system which he had built no less. Aside from Mao's uneasiness about economic and ideological reforms undertaken by Liu and Deng, he also became convinced that the Soviet Union practiced phony socialism. Mao believed the Soviet Union lacked the stomach for a fight with capitalist countries and had become an imperialist power through its interventions in the decolonizing Third World. In doing so, Mao believed the Soviet Union sacrificed its role as the leader of the socialist and anti-imperial world to China. Mao was also concerned that the Chinese people were held back by traditions and customs that needed to be broken if China was to make the leap to Communism. Therefore, the three targets of the campaign were the CCP itself, the Soviet Union, and the 'four olds' (old ideas, old culture, old habits, and old customs). Mao's age also cannot be discounted as a factor in the campaign. Although propaganda from the time tried to show Mao as energetic and vigorous, with extensive coverage of his nocturnal work habits and a famous swim across the Yangzi River in July 1966, he was already in his early 70s and a chain smoker. Therefore, the campaign was a way for him to guarantee the revolution would outlive him, while also, through the unrestrained personality cult, buying a sort of immortality.

By early 1966, the preliminary ideological work for a leftist resurgence had been laid, and that summer Mao unleashed student 'red guards' on the party establishment and society as a whole. Millions of people were persecuted and suffered in the ensuing waves of violence, particularly those who were perceived as opposed to Maoism, had a problematic political background (such as having worked for the pre-1949 anti-Communist government), or had a privileged position in society. Anyone in the cultural sphere, such as writers, actors, and musicians, were also at very high risk of being attacked. Artistic production was restricted to stolid reproductions of a narrow range of officially approved works extolling the workers, the revolution, and Mao. Even doctors, engineers, and other professionals with essential skills were attacked, and universities were closed (later reopened as Maoist indoctrination centers), setting back China's development.

After a period of serious civil unrest, including battles between rival red guard factions trying to prove their loyalty to Mao and between red guards and the military, Mao had the military restore order and help administer the country, sending the red guards 'down to the countryside' to 'learn from the peasants.' This increased role for the military led to Mao becoming increasingly distrustful of Lin Biao, and Lin died in 1971 in a plane crash in Mongolia, in what may have been an attempt to escape China after a failed coup. Afterwards, China began its opening to the United States and other foreign countries, determining the Soviet Union to be their main enemy (the two countries fought a border conflict in 1969 and almost launched nuclear weapons at each other). Ideological control also began to slacken, though periodic crackdowns still caused tremendous suffering, and in fact more people died in this more 'moderate' phase of the Cultural Revolution than had died in the late 1960s.

The Party declared in 1981 that the Cultural Revolution was 'responsible for the most severe setback and the heaviest losses suffered by the Party, the country, and the people since the founding of the People's Republic.' At the same time, Mao's image as a revolutionary hero and national savior was important for the party's legitimacy, not least with the millions of remnant Maoists in the country, so Jiang Qing and her cronies were made scapegoats for the disastrous campaign and Deng deemed Mao to have been '70% correct and 30% wrong.'

This map was published in February 1966, the third printing of a second edition of the map, originally published in May 1965. It was edited and published by China Cartographic Publishing House (中国地图出版社) and was distributed and sold by Xinhua Bookstore (新华书店). Several maps with this (very generic) title were published by China Cartographic in 1966, but they are not the same map. Other editions of this map (from 1972 or 1973) are held by the University of California (Berkeley, Los Angeles, Santa Barbara) and Stanford University, but this edition does not appear to be held by any institution and is scarce to the market.

﻿China Cartographic Publishing House (中国地图出版社; 1954 - present) is the only national-level publisher of maps in the People's Republic of China and is by far the largest publisher of maps in China. The firm was formed with the consolidation of the state-run Xinhua Map Agency and 15 other private press agencies, among them some of the earliest known modern Chinese map publishers dating to about 1900. Its official English name has been changed to Sino Map Press. Learn More...


Xinhua Bookstore (新华书店; 1937 - Present) is the largest and only nation-wide bookstore chain in China. It was founded in 1937 in Yan'an as Guanghua Bookstore under the Propaganda Department of the Communist Party of China. Its name changed in 1942. Chairman Mao Zedong made the four Chinese letter logo in brush writing in 1948. The operation was divided into the People's Publishing House, Xinhua Publishing Plant, and Xinhua Bookstore at the First All-China Publishing Administration Conference in 1951. The chain was reorganized in 2003, falling under control of the China Publishing Group. Xinhua Bookstore has overseas subsidiaries in London, New York City, San Diego, and Manila. Learn More...