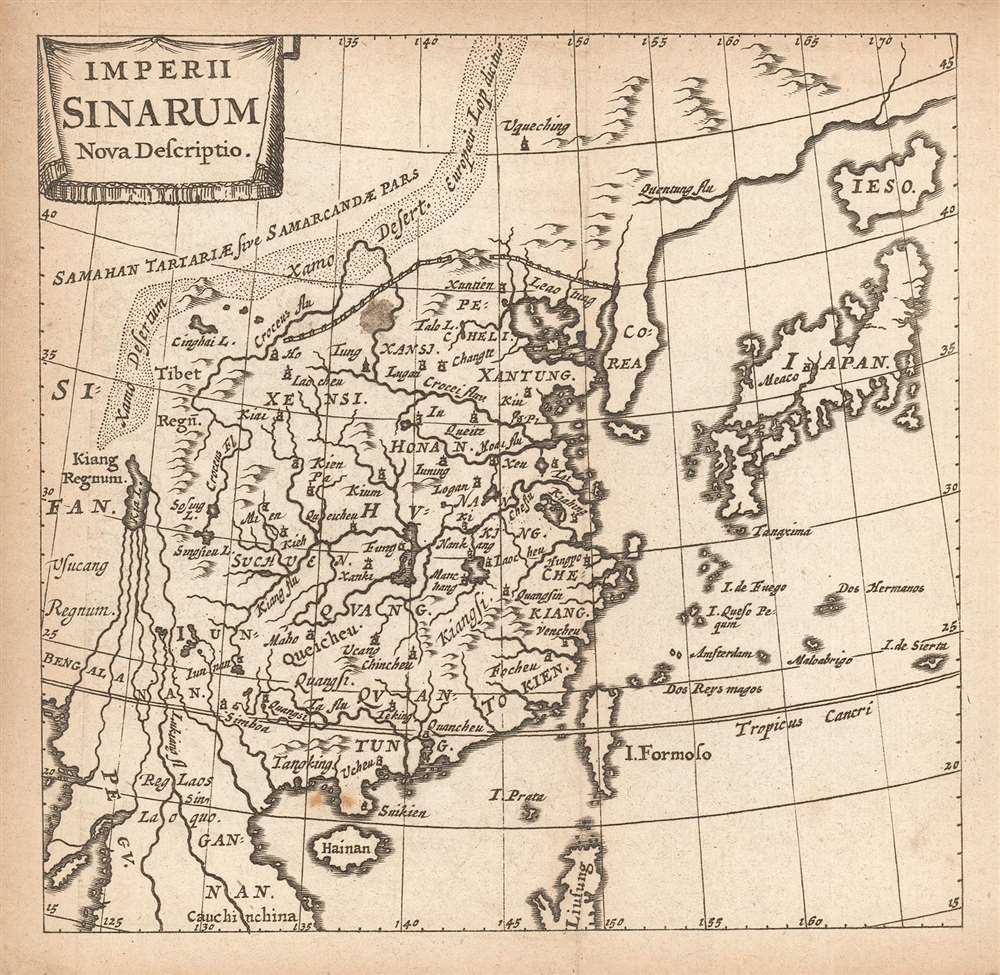 This is a finely-engraved miniature map of China, Korea and Japan, printed in a 1661 Elzevir edition of Philipp Cluver's introduction to geography. Cluver's work appeared in editions produced by many different houses, and with maps of wildly differing characteristics.

The map's detail is primarily focused on China itself. The Great Wall is shown; points north of it include the Gobi Desert (Xamo) and reference to the kingdom of Samarkand. Korea appears with little detail, but is represented as a peninsula - correcting the long, erroneous insular Korea myth. Japan is recognizable; the proto-Hokkaido (Ieso) appears correctly as an island, rather than as part of the Asian mainland as it often would through the latter 17th and the 18th centuries. In these respects, this map follows the model of Joan Blaeu's 1655 map of the same title, as did the China map appearing in the 1661 Conrad Buno edition of Cluver. However, while the place names match closely, the Elzevir edition is executed better than the Buno, whose lettering is childlike, and approaching illegible in comparison. The Elzevir, particularly considering the workaday source, is an extremely artful piece, exhibiting expert engraving with an even, light hand. Even the simple cartouche of this example is more elegantly and artistically rendered than the clumsy, blockish cartouche of the Buno.

At the western extreme of the map, north of what would become Burma appears the mythical Lake of Chiamay (Xia L. on the map). roughly in what is today Assam, India. Sixteenth and Seventeenth century cartographers postulated that such a lake must exist to source the four important Southeast Asian river systems: the Irrawaddy, the Dharla, the Chao Phraya, and the Brahmaputra. This lake began to appear in maps of Asia as early as the 16th century and persisted well into the mid-18th century. Its origins are unknown but may originate in a lost 16th century geography prepared by the Portuguese scholar Joao de Barros. It was also heavily discussed in the journals of Sven Hedin, who believed it to be associated with Indian legend that a sacred lake, Mansarovar, linked several of the holy subcontinent river systems. There are even records that the King of Siam led an invasion to take control of the lake in the 16th century. Nonetheless, the theory of Lake Chiamay was ultimately disproved, and it disappeared from maps entirely by the 1760s.

None of the maps appearing in the Elzevir edition of Cluver's Introductionis in universam geographiam are signed by an engraver. For a miniature map, this is not unusual - very often this work was executed by journeyman engravers, who would not have the right to apply their imprint. However, it is very possible that the matriarch of the Elzevir firm - Eva van Alphen - did this work herself. She is known to have been an accomplished engraver, having been credited with a beautiful Dutch Bible map after Visscher (Orbis Terrarum Tabula Recens Emendata et in Lucem Edita per N. Visscher). At the time their Cluver was produced, Eva's husband Jean was in failing health and upon his 1661 death she took over direction of the firm. The excellent work here may well be hers.

The map was engraved for inclusion in Philipp Cluver's Introductionis in universam geographiam, as early as 1659. Though he did not live to see it in print, Cluver's text became one of the most popular of the seventeenth century, printed in many editions from 1624 through the 18th century. This example appeared in a 1661 edition of the book, published by the house of Elzevir. This edition of Cluver is noted in 15 examples in OCLC; the separate map is not catalogued.