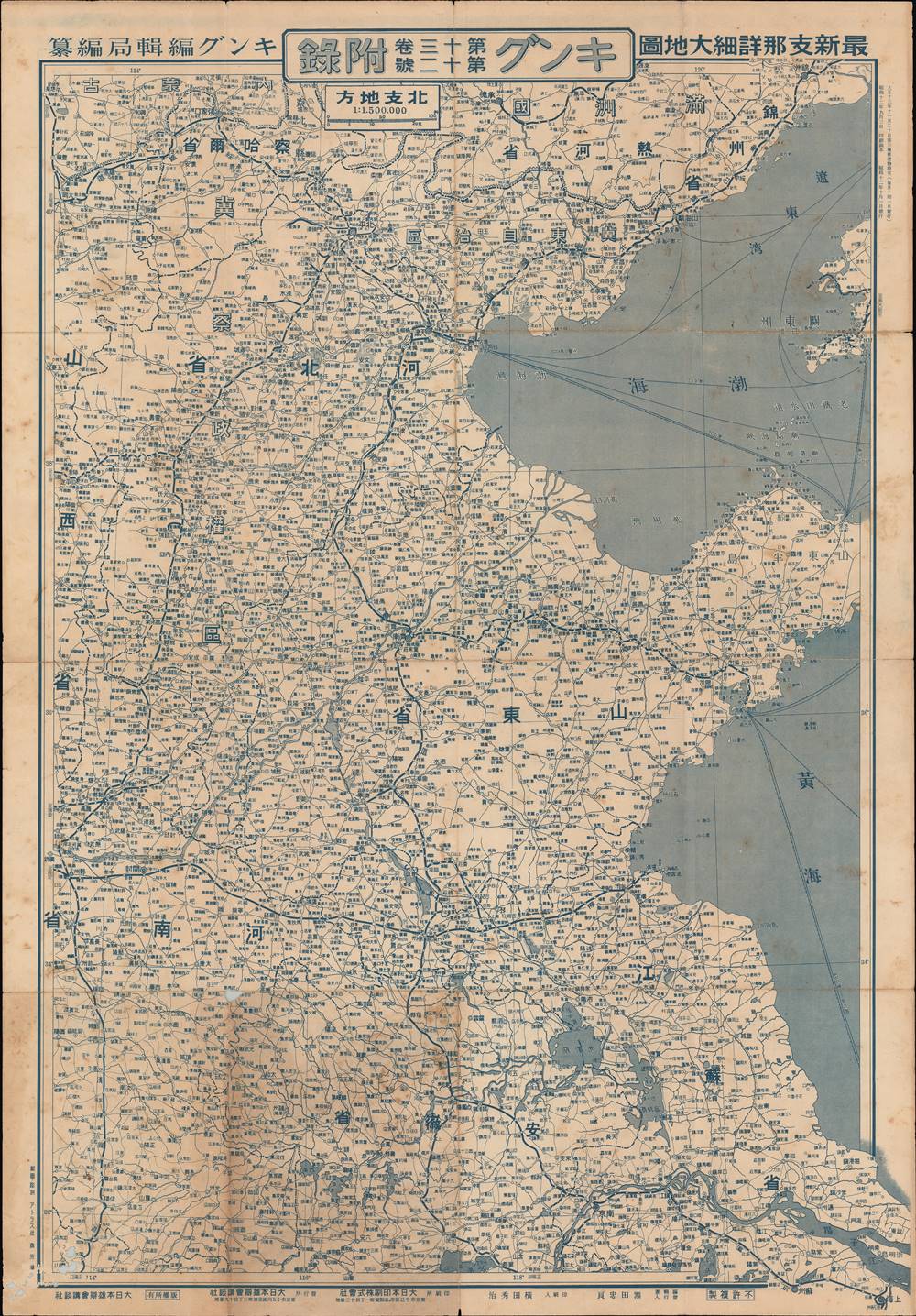 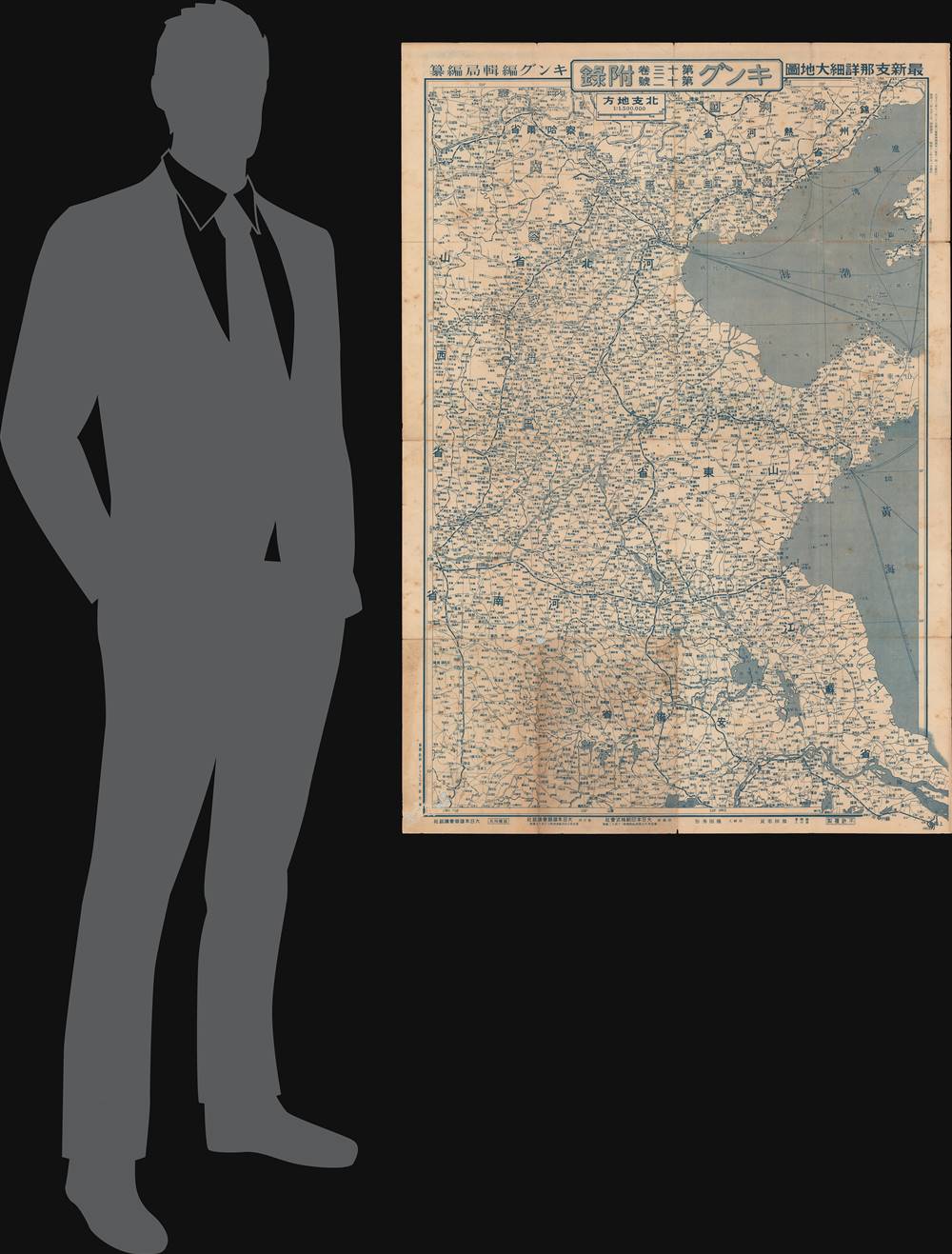 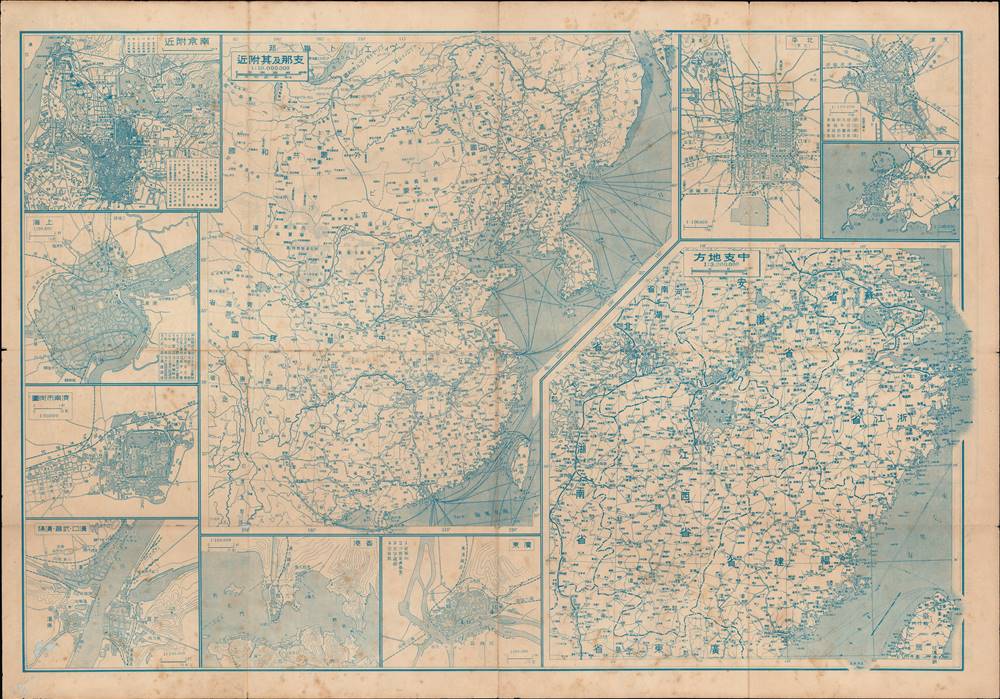 This is a 1937 Fuchida Tadayoshi map of China published in King (キング) magazine during the opening phase of the Second Sino-Japanese War (World War II).

Between the front (recto) and back (verso), the map shows the entire front of the early phase of the conflict, from Japanese puppet states in Manchuria and northern China to China's southern coastal provinces of Fujian and Guangdong. At front is the coastal regions of northern China, roughly as far as Shanghai, where Japanese influence was already strong after years of expanding its military and economic presence.

The level of detail is extraordinary, particularly for a popular publication, but also highlights the immensity of the task facing Japan if it intended to occupy all of China. It is worth noting that, at the time of publication, it was not clear that the hostilities in China would evolve into a full-scale, protracted war. Japan initially hoped for more Chinese concessions and piecemeal territorial gains, and later aimed to deliver a severe enough blow to force Chiang to surrender. Full mobilization on a total war basis only commenced the following year, when it became clear that Chiang and his troops had no intention of surrendering despite losing Shanghai, Nanjing, and much else.

The Battle for Shanghai and Its Aftermath

Starting with the Japanese invasion of Manchuria (the 'Mukden Incident') in September 1931, Chinese and Japanese troops fought on-again, off-again battles in northern China for several years. One of these many skirmishes took place on July 7, 1937, at the 'Marco Polo Bridge' (Lugouwiao 盧溝橋), just to the southwest of Beijing. Chiang Kai-Shek was reluctant to throw his armies into a full-scale war against the better trained and equipped Japanese forces, but was compelled to bow to public pressure and launch the long-expected war.

Chiang decided to dedicate the bulk of his best trained and equipped forces to a battle for Shanghai, allowing Beijing (at this time Beiping) to fall along with the rest of coastal north China, which was already within Japan's sphere of influence and virtually impossible to defend. Chiang also decided to focus on Shanghai because of the city's international profile and the large numbers of foreigners there; his strategy for winning the war relied in part on gaining foreign support, which ultimately succeeded. Due to the speed and surprise of their attack, Chinese troops at first succeeded in seizing territory defended by Japanese garrison forces in Shanghai, but lost momentum as Japanese reinforcements and heavy weapons came into play. Chinese-administered parts of the city, particularly Zhabei and Wusong to the north and east of the International Settlement, along with the Japanese neighborhood of Hongkou in the International Settlement, saw extensive bombardment and house-to-house fighting.

Despite the valiant efforts of Chinese troops, Japanese forces had naval, air, and artillery superiority and were able to receive sufficient resupply and reinforcements, gradually turning the tide over several months. With most Chinese forces engaged in and around the city, a massive pincer counter-attack was prepared, similar to the Soviet victory at Stalingrad six years later. Severely weakened by the fighting in Shanghai and with many units in disarray, Chiang arranged a hasty defense of Nanjing while planning for a retreat to Chongqing, deep in the Chinese interior, to prepare for a long-term war of attrition.

This map was printed on September 3, 1937 (Showa 12) and published on October 1 as a supplement to King (キング) magazine. It was edited and published by Fuchida Tadayoshi (淵田忠良) of Kōdansha (式会社講談社), printed by Yokota Shūji (横田秀治) of the Dai Nippon Printing Co. (大日本印刷株式會社), and drawn and engraved by the firm Atlas (アトラス社). It is known by us to exist in the institutional holdings of Cornell University and the National Library of China.