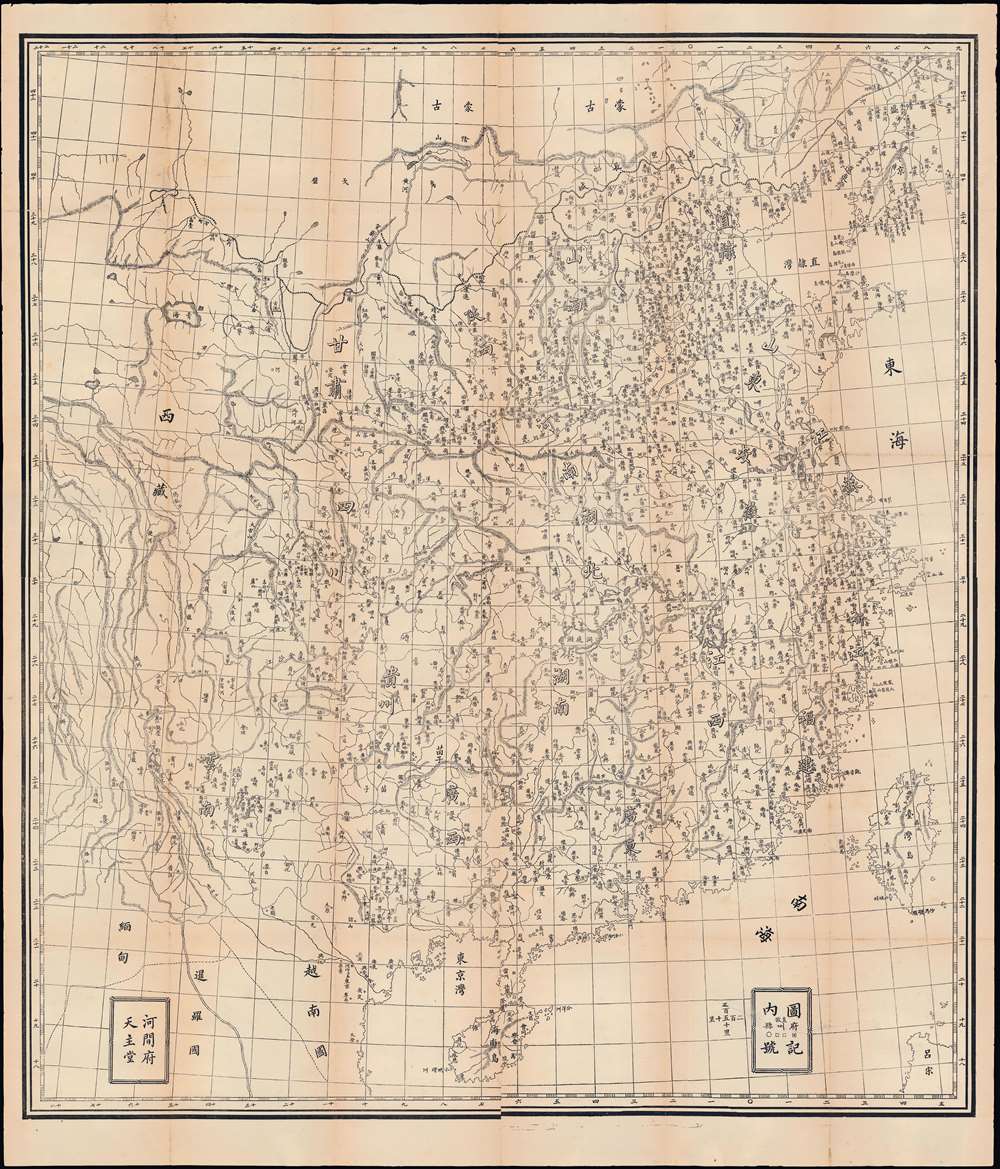 Of this utmost rarity, this is a highly detailed c. 1880 Chinese map of China produced by the Hejian Prefecture Catholic Church of the Jesuit mission in Southeastern Zhili. The map is significant for its combination of Western and Chinese mapping styles. The map is overlaid with a grid representing latitude and longitude, with a line running through Beijing serving as the prime meridian. It also incorporates an interesting method of scaling, with each square in the grid representing an area that is 250 li across and 350 li tall (one li was equivalent to between 537 and 645 meters during the Qing period).

This map has some curious features that may indicate its intended use and audience. Most significantly, this is primarily a map of 'China proper' rather than the entirety of the Qing empire, including various groups on China's frontiers who recognized Qing suzerainty in some form or neighboring countries that were tributaries (though parts of Vietnam, Siam, and Burma are included). Therefore, much of Manchuria, Mongolia, and Tibet are not included, nor is the entirety of the 'Western Regions' that would become Xinjiang. While several cities are referred to by contemporary names that changed after this map was made (Jiangning 江寧 for Nanjing, Shengjing 盛京 for Shenyang, Jimo 即墨 for Qingdao), other place names were already anachronistic when this map was made, most notably Beijing, which is noted here as Shuntian (順天). A number of former prefectures that had been prominent in previous dynasties, but had been eliminated or diminished by Qing times, are also noted, such as 隰州, 沁州, and 遼 in Shanxi 山西. The map also indicates the Great Wall (萬里長城) and the Grand Canal (北運河 and 南運河), both of which had by the late 19th century become irrelevant and were no longer maintained.

These oddities suggest that, aside from being florid, the Jesuits were referring to earlier maps of China made by their confreres in the 17th and 18th centuries. For example, earlier Jesuit maps also labelled Beijing as Shuntian and used it as the prime meridian for measuring longitude. The hybrid system of latitude and longitude combined with a Chinese-style grid overlay was also developed by Jesuit missionaries in the early Qing period. The anachronistic placenames were useful for researching early Christianity in China, which dates to the 7th century early Tang.

It is also worth noting a glaring inaccuracy on the map: the placement of Taipei (臺北) in central Taiwan. The map's creators must have confused it with Taichung (then known as Taotun, 大墩), perhaps a reflection of the lack of knowledge about the island in mainland China.

Jesuit missionaries arrived in China in the early seventeenth century and were generally distrusted due to their foreign faith, but were allowed to stay in Beijing, construct churches, and render services that the emperor and his advisors deemed useful. In particular, the Jesuits were great mathematicians, astronomers, cartographers, painters, musicians, translators, and manufacturers of mechanical devices like clocks. At the same time, many Jesuits mastered Chinese and, in tandem with Chinese associates (some of whom also became Jesuits), translated classical texts of Chinese civilization into Latin and other Western languages.

Due to religious suppression in both China and Europe, the Jesuit mission in Beijing faded and the last Jesuits there died in the early 19th century. However, with the revival of the Jesuits in Europe after the Napoleonic Wars, and the official toleration of Christianity in China as a result of the First Opium War, the Jesuit mission was revived in the mid-19th century.

Carrying on the Mission

Although they perhaps did not approach Chinese civilization with the same degree of reverence as their predecessors, the Jesuits of this 'new mission' sought to carry on the legacies of Sinology, translation, and scientific research of the 'old' mission. By the late 19th century, both Chinese and European Jesuits published well-regarded texts in a variety of fields and regularly won the prestigious Prix Stanislas Julien for works in Sinology. Although the intellectual heart of the Jesuit mission in China was in Shanghai, the mission in southeastern Zhili Province based at Xian County (獻縣) also published myriad works on a wide variety of topics. Hejian (河間), the site of the Catholic mission that made this map, is located in Zhili Province, towards upper-right, due west of the character 隸 in 直隸, near Suning 肅寧.

This map was printed and published by the Hejian Prefecture Catholic Church, which was managed by the Jesuits of the Apostolic Vicariate of Southeast Zhili. It is undated but must be from before 1884, when Xinjiang became a province (Taiwan is also not listed as a province, meaning the map must predate 1887). However, given the changed course of the Yellow River noted here, it must date from after 1855. It is also held by Harvard University, which catalogs it as 1877-1885. It is very scarce to the market.

Hejian Prefecture Catholic Church (河間府天主堂; fl. c. 1875 - 1925) The Apostolic Vicariate of Southeast Zhili (直隸東南代牧區) was established in 1856 in the flurry of missionary activity accompanying the official toleration of Christianity after the First Opium War. Like many missions in China at the time, the Hejian Church had a printing press and published a variety of devotional, literary, and scientific materials. Learn More...