1864 Johnson Map of China and Taiwan 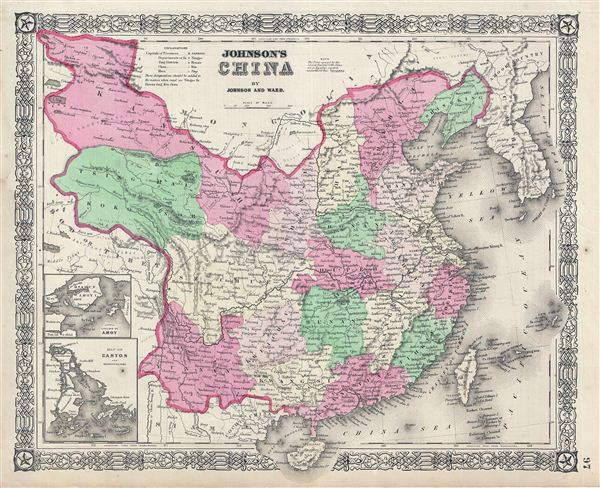 1864 Johnson Map of China and Taiwan

This is Johnson and Ward's 1864 map of China, covering from Mongolia to Hainan and from Tibet to Korea. The map identifies both the Great Wall and the Grand Canal. It depicts the region with particular attention to cities and waterways. China at the time this map was made was a mostly closed country, however, a few ports were opened to western trade and are noted in capital letters and include Tanchau, Kaifung, Waingan, Shanghai, Canton and Nanking (Nanjing) among others. Insets detail the 'Island of Amoy' and Canton (near Hong Kong). Taiwan or Formosa is mapped vaguely, representing the poor knowledge of the region prior to the Japanese invasion and subsequent survey work in 1895. The map identifies both Hong Kong and Macao. The disputed body of water between Korea and Japan is here identified as the Sea of Japan. Various towns, cities, rivers and several other topographical features are noted with relief shown by hachure. This map features the fretwork style border common to Johnson's atlas work from 1863 to 1869. Steel plate engraving prepared by A. J. Johnson for publication as plate no. 96 in the 1864 edition of his New Illustrated Atlas.  This is the first edition of the Johnson's Atlas to bear the Johnson & Ward imprint and the only edition to identify the firm as the 'Successors to Johnson and Browning (Successors to J. H. Colton and Company).'