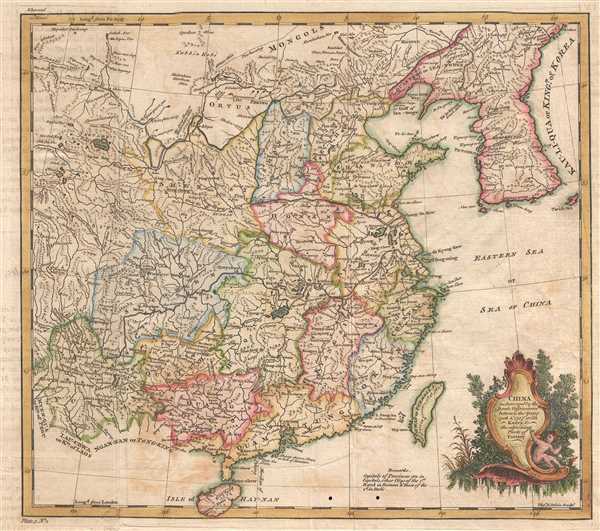 Labels the Eastern Sea, though as part of the East China Sea.

This is a 1747 Thomas Kitchin map of China. The map depicts the region from Yunnan to the East China Sea and from Mongolia and Korea to Hainan. Exquisitely engraved, myriad cities, towns, and villages throughout China are labeled, including Beijing (Peking), Guangzhou (Canton), and Nanjing (Nan-King). The Great Wall of China is also illustrated traversing northern China near Beijing. Cartographically, the map is based on early maps by Jean Baptiste Bourguignon d'Anville, note in particular D'Anville's characteristic shaping of the Korean Peninsula. The Kingdom of Korea is also labeled Lau-Li-Qua, which is quite unusual. The body of water east of Korea remains unlabeled, which is significant as there is a debate between naming it the East Sea, the Sea of Korea, or the Sea of Japan. Curiously, here the Eastern Sea is labeled, but further to the south as part of the East China Sea, which today is not part of this dispute.

The Qing Emperor Kangxi commissioned a ground of Jesuit surveyors to map China from 1708 to 1716. The resulting maps were published as the Kangxi Atlas (1718-19). The leading French cartographer Jean-Baptiste Bourguignon D'Anville (1697-1782), acquired copies of the Kangxi maps, which were first printed in Jean-Baptiste Du Halde's Description Geographique … de la Chine (Paris, 1735).

This map was created by Thomas Kitchin and published in 1747.