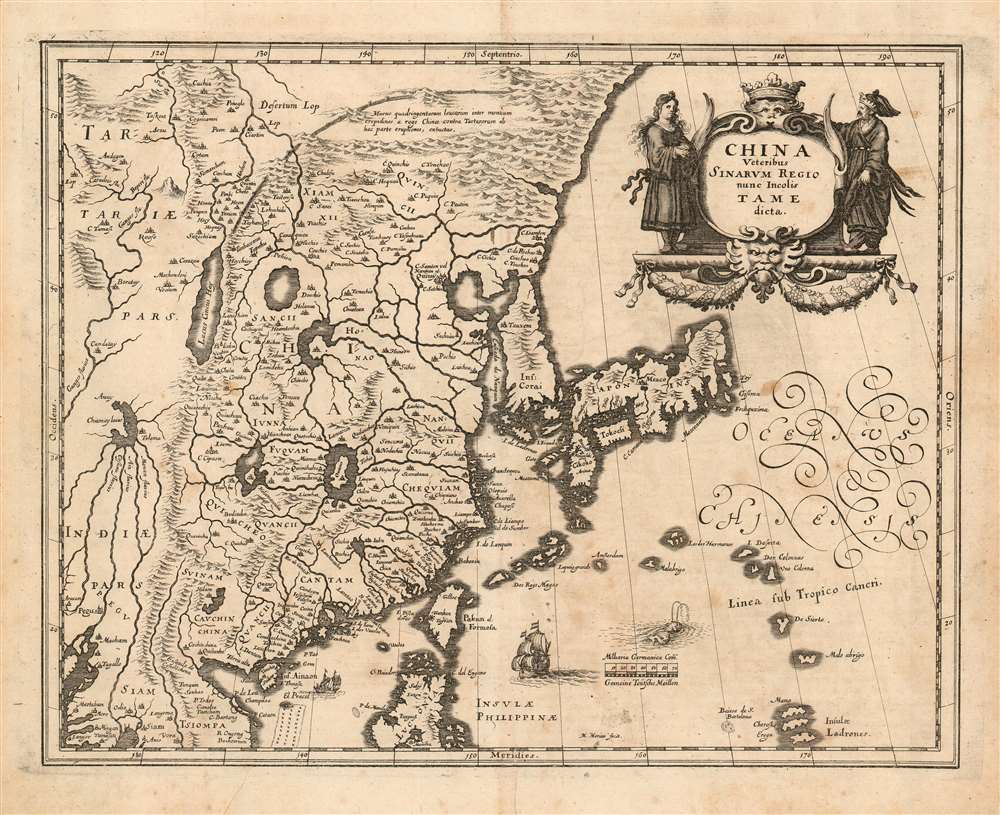 This is a scarce 1638 Matthais Merian map of China and Japan with an insular Korea. The map is beautifully engraved, decorated with a Chinese junk, a Dutch sailing ship, and a sea monster; the elegant cartouche is flanked by a man and woman in (presumably) Chinese robes. The Great Wall features prominently. The Philippine island of Luzon is shown, as is Formosa (Taiwan.)

This map is a scrupulously precise reduced version of the 1634 Blaeu map of the same title. There are only a few small omissions, and even the cartouche art is reproduced. Jansson also produced a nearly identical version of the Blaeu in 1636. The differences between them are largely cosmetic - the Jansson lacks longitude lines, and the Blaeu has an elaborate dedicatory cartouche. The only difference in geographical content between the two is the transposition of the island place names of 'Fochquxima' and 'Meacexuma' off the southeast coast of Japan. Merian's placement of these names corresponds to Blaeu's; this, and some of the decorative engraving suggests that Merian drew on the Blaeu as his source, and not the intermediate Jansson map.

What were Blaeu's sources for this map?

The bulk of the information pertaining to China appears to correspond with Luis Jorge de Barbuda's data found on Ortelius' 1584 map, including the descriptive text pertaining to the Great Wall. That map, however, lacked any indication of Korea (insular or peninsular), and Japan was presented very differently. The shape of Japan conforms loosely to that on Ortelius' 1595 map of Japan and Korea based on Luis Texeira's information, and the insular depiction of Korea agrees with that source. However, the Ortelius/Texeira model has Korea tapering to a 'Punta dos Ladrones' in the south, while the Blaeu (and consequently the Merian) shows a squarish southern Korean coast broken into an archipelago, more resembling what is actually there and suggesting a better-informed source than Ortelius.' In fact, the southern Korean coast and the whole southern coast of Japan appears to have been drawn from a 1621 manuscript chart produced by Hessel Gerritz while he was the first exclusive cartographer of the Dutch East India Company. The Blaeu family's long connection with this accomplished chart maker bore fruit for many years. Interestingly, Gerritz's chart makes no reference to the insularity of Korea - so Blaeu attempts to blend his state-of-the-art charting of the south with Ortelius's once-authoritative model.

A Proliferation of 'Thieves'

Several locations on the map bear variations on the place name 'Ladrones.' In the southeast corner of the map are the Insulae Ladrones, which are now understood as the Mariana Islands; a further I. de Ladrones appears on the southern coast of Korea, corresponding roughly with Jeju Island. In both cases, the name is derived from the Spanish and Portuguese word for 'Thieves.' The appellation of 'Ladrones' in the Marianas dates back to report of Magellan's reception in Guam by the Chamorros, who boarded the ship and stole whatever could be taken. As for Korea, the archipelago inclusive of Jeju and Tsushima gained a reputation for piracy - at the least, the passive piracy of stripping wrecks. The name appears on maps of Korea going back to the 1595 Ortelius and the 1596 Linschoten, so it is unsurprising to see it surviving here.

The mythical Lake of Chiamay appears near the western extreme of the map, roughly in what is today Assam, India. Early cartographers postulated that such a lake must exist to source the four important Southeast Asian river systems: the Irrawaddy, the Dharla, the Chao Phraya, and the Brahmaputra. This lake began to appear in maps of Asia as early as the 16th century and persisted well into the mid-18th century. Its origins are unknown but may originate in a lost 16th-century geography prepared by the Portuguese scholar Jao de Barros. It was also heavily discussed in the journals of Sven Hedin, who believed it to be associated with Indian legend that a sacred lake, Mansarovar, linked several of the holy subcontinent river systems. There are even records that the King of Siam led an invasion force to take control of the lake in the 16th century. Nonetheless, the theory of Lake Chiamay was ultimately disproved, and it disappeared from maps entirely by the 1760s.

This map was executed in 1638 for inclusion in Matthias Merian's Neuwe Archontologia cosmica, a German translation of Pierre d'Avity's 1616 Les Estats, empires, et principautez du monde. We identify about ten examples of later editions of Merian's Neuwe Archontologia cosmica in institutional collections, and ten examples of this separate map are so catalogued, in various editions.