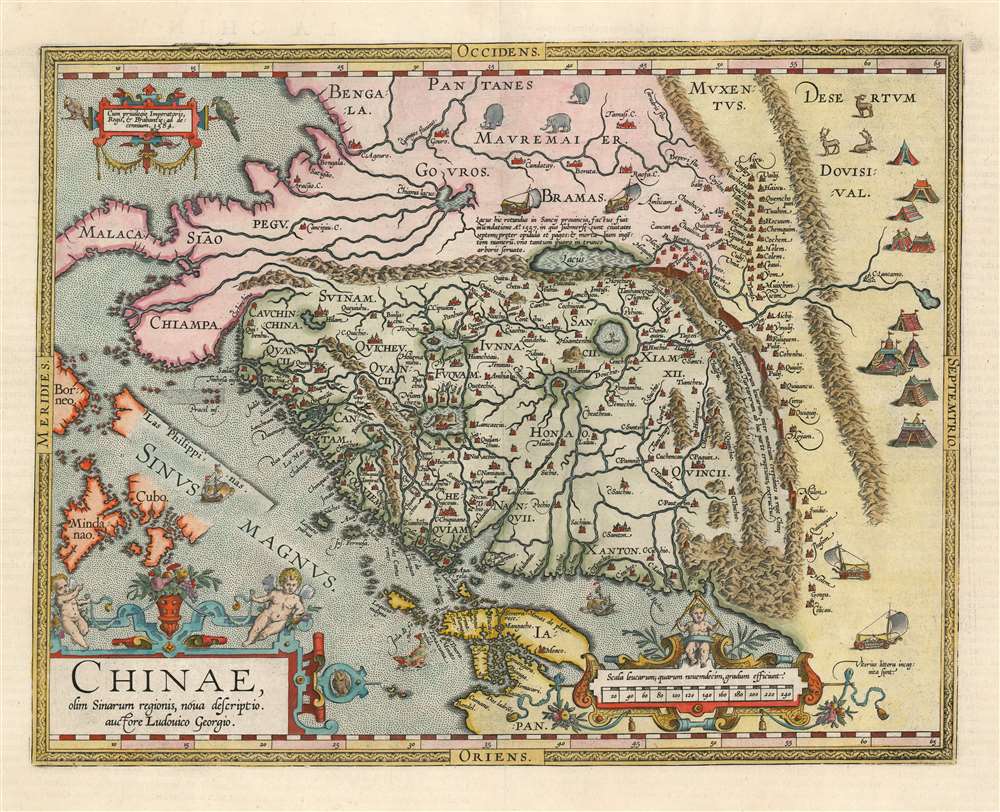 First European map specifically of China to appear in a modern atlas.

This is Abraham Ortelius' 1584 map of China, the first specific map of China to appear in an atlas. Based ultimately on reports of Portuguese missionaries, it would not be substantially improved upon until Martino Martini's (卫匡国; 1614-1661) 1655 maps. The map is visually very distinctive, with its western orientation and abundant decorative elements.

An Array of Firsts

This is the first printed European map specifically of China (not named on the 1522 Fries, which was the first to show the area overall). It is the first map of China to appear in a modern, uniform atlas. It was, as of the second state of the map in 1587, the first map to name the Philippine Archipelago, though only Mindanao and the southern shores of Cebu are shown: further expanses of hypothetical 'island' are roughed in, but Luzon does not appear. Suarez in his Early Mapping of Southeast Asia posits that this depiction derives, not from reports of Spanish ships arriving from the east (as did Magellan), but from Portuguese ships arriving from the west and keeping to the coast en route to China.

It is the first to depict the Great Wall of China. Though presented impressively, enclosing the whole northern border of China, the wall's size is grossly underestimated in the attendant note: A wall of four hundred miles has been constructed between the edges of the mountains by the king of China against the invasions of the Tartars in this part.

This map contains the first depiction of wind wagons, the sight of which astonished European travelers visiting in the 16th century but which the Chinese are recorded of having employed as early as the 6th century. The verso text contains the first western printed representation of Chinese characters.

Portuguese Sources and the 1556 Shaanxi Earthquake

The map's Portuguese Sources record, through a gauze of error, the deadliest earthquake in human history. In Shaanxi province (Sancii) is shown a round lake with a figure afloat in it, in a prayerful pose. Text refers to the picture:

This round lake in the province of Sancii was made by a flood in the year 1557, during which seven cities were submerged, as well as towns and villages, and a very great number of dead people were the result, except for one boy only, who was saved by means of a tree trunk.

The story appears to refer to the great 1556 Shaanxi Earthquake - in the aftermath of which a great deal of flooding and landslides occurred. The 1556 quake has been estimated to have been a magnitude 8 earthquake; immediately as many as 830,000 Chinese living in loess caves (yaodongs) on high cliffs were killed as the earthquake initiated a horrific cascade of landslides and floods. Chinese annals describe it:

Mountains and rivers changed places and roads were destroyed. In some places, the ground suddenly rose up and formed new hills, or it sank abruptly and became new valleys. In other areas, a stream burst out in an instant, or the ground broke and new gullies appeared. Huts, official houses, temples and city walls collapsed all of a sudden.

Although an abundance of placenames appear to the North of the Great Wall, their extreme regularity betrays them as less of a map and more of a list. Derived largely from Marco Polo's report, they are presented here in order and without benefit of distances. Pictorially, however, Polo's reports of tent-dwellers and pavillion-cities are captured.

The Asian coastline north of the wall is marked incognitaand there is no indication of the Korean peninsula (another indication of this cartography's source in Portuguese sources, derived from journeys from the southwest.) Japan appears in part, a curved formation typical of Portuguese charts of the period (Ortelius depicts Japan five different ways, on five different maps in the Theatrum a telling statement on the mystery surrounding this part of the world.

The mythical Lake of Chiamay, or Chiang Mai, appears at the western extreme of the map, roughly in what is today Assam, India. Early cartographers postulated that such a lake must exist to source the four important Southeast Asian river systems: the Irrawaddy, the Dharla, the Chao Phraya, and the Brahmaputra. This lake began to appear in maps of Asia as early as the 15th century and persisted well into the mid-18th century. The origins of the place name are unknown but the Portuguese Tomé Pires referred to it in his Suma Oriental of 1512-15. It was also heavily discussed in the journals of Sven Hedin, who believed it to be associated with Indian legend that a sacred lake, Mansarovar, linked several of the holy subcontinent river systems. There are even records that the King of Siam led an invasion to take control of the lake in the 16th century. Nonetheless, the theory of Lake Chiamay was ultimately disproved and it disappeared from maps entirely by the 1760s.

This map was engraved and included in Ortelius' 1584 Theatrum Orbis Terrarum, remaining in all subsequent editions of that work. This example was printed between 1608 and 1612 for the Italian edition produced by Johannes Baptista Vrients, who as Ortelius' executor acquired the plates for the atlas after the mapmaker's death. Van den Broecke estimates that three hundred examples of this edition of the atlas were printed. Perhaps twenty-seven examples of the Italian edition are catalogued in OCLC. Twenty-two examples of the separate map are catalogued by institutional collections.


Luiz Jorge de Barbuda (1564? - 1613? ) was a Portuguese cartographer. He is known primarily as the individual credited by Abraham Ortelius as the source for During his 1584 map of China, the first map specifically of China to appear in an atlas. Little is known of his early history and there is little agreement by scholars on his dates. It is understood that he was, in 1582, commissioned by Philip II of Spain to produce navigation charts and world maps. His role as an official cartographer for Spain makes the appearance of his map in Ortelius' atlas all the more remarkable: The Spanish were reluctant to share any of their cartographic information and printed virtually none of it in the 16th and 17th centuries. Nevertheless, his Chinaeappeared in Ortelius' Theatrum Orbis Terrarum accompanied by a brief description of China and its language, derived from Bernardino de Escalante's 1577 Discurso de la navegacion que los Portugueses hacen a los Reinos y Provincias de Oriente, Spain's first book about China. Both the map and the description published in Ortelius' work would remain the most authoritative European description of China until Martini's 1655 work became available. Learn More...

Ortelius, Abraham and Vrients, Johannes Baptista Theatro del Mondo Antwerp, 1608/12     Abraham Ortelius' magnum opus, Theatrum Orbis Terrarum, was the world's first regularly produced atlas, which 'set the standards for later atlases . . . It was the first undertaking of its kind to reduce the best available maps to an uniform format.' (Koeman) A modestly-sized work of fifty-three maps in its first edition of May 1570, it was an immediate success: there were three further editions that year, and the work remained in print for a total of 32 editions, the last of which was 1641, well after its author's 1598 death. Ortelius added to his atlas constantly, and by 1595 the Theatrum contained 147 maps. Ortelius is renowned generally as an editor, and indeed much of the Theatrum is compiled from a variety of sources: in such cases, Ortelius was scrupulous in naming his sources. But Ortelius was also a mapmaker in his own right: many of his maps are a distillation of various sources into his own work, and there were many maps - particularly in his atlas of Biblical and ancient history Parergon - which were entirely Ortelius' work. In his role as an editor, Ortelius followed in the footsteps of Munster, whose Cosmographia was, until Ortelius, the best window on the world for the curious European reader. In terms of the artistry of his maps, Ortelius oversaw the first great flourishing of copperplate engraving in the service of cartography to occur in Northern Europe. Ortelius' work provided the model for the atlases of Mercator, Hondius, Blaeu and all their progeny in the 17th century - many of whom were to produce faithful editions of Ortelius' maps in their own productions.