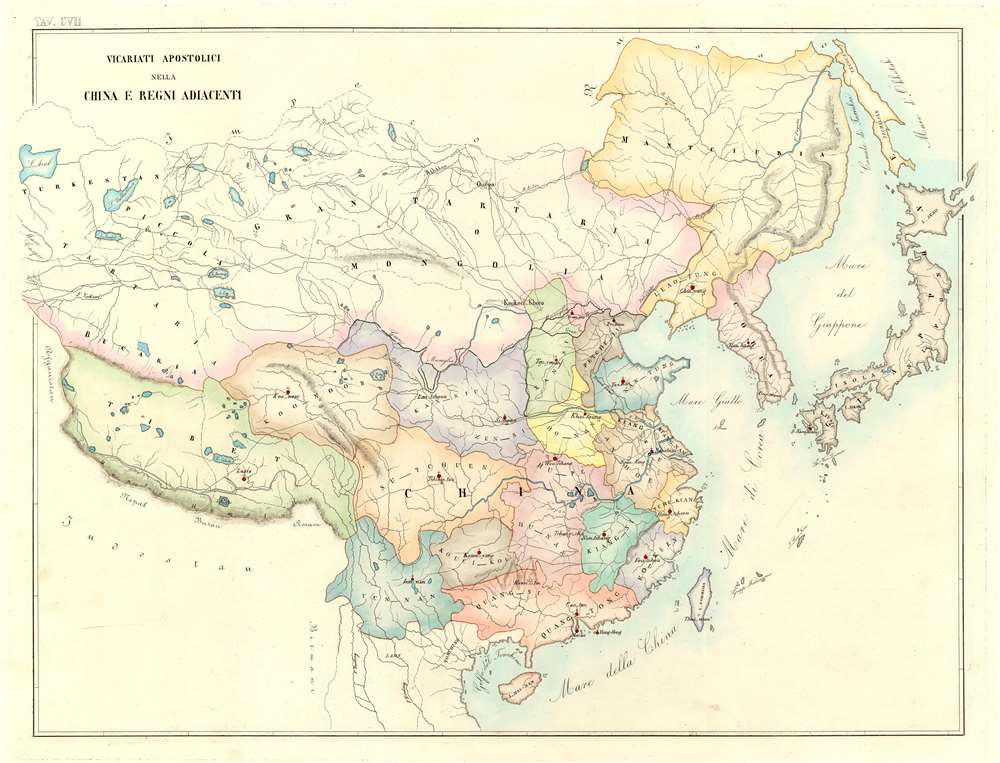 An extremely rare Italian map of Catholic dioceses in China just after the end of the Second Opium War.

This is an 1858 Girolamo Petri map of Catholic dioceses in China. The map depicts the region from the Aral Sea to Japan and from Imperial Russia to Hainan, Laos, and Vietnam. Beautifully colored, each diocese is labeled and shaded differently to allow for easy differentiation. The seat of each diocese is highlighted by a red dot among these are Beijing, Nanjing, Guangzhou (Canton), Hong Kong, and Macau. Numerous rivers are illustrated, although only a handful are labeled, such as the Yangtze. Taiwan (Formosa) is also identified, as are Korea and Japan. The Gulf of Tonkin, the China Sea, the Yellow Sea, and the Sea of Japan are also noted. As this map dates from the end of the Second Opium War, it is highly possible that these dioceses had only recently been created. European missionaries had been banned from China for most of the preceding century.

Catholicism has a long and complicated history in China. The religion arrived in the region in the 13th century, with the arrival of Catholic missionary priests. John of Montecorvino, an Italian Franciscan priest, arrived in Beijing in 1294 and by 1299 he had built a church. During and after the Catholic Reformation, missionary work in Asia exploded. The first permanent mission was established by Jesuit missionary Matteo Ricci in 1601, who also attempted to reconcile Christianity with Classic Confucian texts. Ricci died in 1610, but the mission he established became an important part of the Imperial civil service into the eighteenth century. China's relationship to Christian missionaries has always been fraught. The Kangxi Emperor banned Christianity in 1715 because of the Chinese rites controversy. A section of the 'fundamental laws' of China is titled 'Wizards, Witches, and all Superstitions, prohibited', and the Jianqing Emperor added a clause to this section in 1814 that referenced Christianity. It was modified again in 1821 and printed by the Daoguang Emperor in 1826 and sentenced Europeans to death for spreading Catholic Christianity among Han Chinese and Manchus. It was not until the Treaty of Tientsin (also known as the Treaty of Tianjin) ended the Second Opium War and was signed in June 1858 that Christian missionaries were again allowed into China.

This map was created by Girolamo Petri for publication in his L'Orbe Cattolico ossia Atlante Geografico Storico Ecclesiastico in 1858. This map is extremely rare, with only one example cataloged in the OCLC in the collection of the John R. Borchert Map Library at the University of Minnesota. The atlas itself is also extremely rare on the private market, although it is well represented in institutional collections.

Girolamo Petri (1806 - 1871) was an Italian lawyer and official in the Roman Catholic Church. Born in Onano (Viterbo, Lazio), Petri was the son of a Vatican civil servant. He studied law and went on to work as a lawyer for the Church until he was appointed to a position as a senior official in the State Secretariat (the curia body that oversaw the Church's international operations) in 1847. Due to his passion for cartography, Pope Pius IX bestowed upon Petri the task of creating an atlas of the Catholic world, L'Orbe Cattolico ossia Atlante Geografico Storico Ecclesiastico. Petri noted that, in making this atlas, he used only 'the most trusted sources', such as maps in the Vatican archives and from overseas dioceses. Learn More...