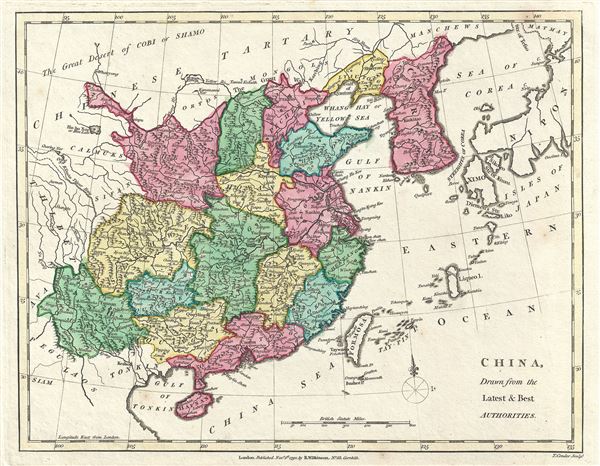 This is a lovely 1792 map of China and Korea by Robert Wilkinson. Wilkinson's map covers China in full as well as Korea, Formosa (Taiwan), and parts of adjacent Japan, Tibet, Vietnam (Tonkin), and Tartary (Mongolia). Color coding divides China into its traditional provinces. The Great Wall of China is also identified.

The sea between Japan and Korea, whose name, the 'Sea of Korea,' 'East Sea,' or the 'Sea of Japan,' is here identified in favor of Korea (Sea of Corea). Historically, Korea has used the term 'East Sea' since 59 B.C., and many books published before the Japanese annexed Korea make references to the 'East Sea' or 'Sea of Korea.' Over time, neighboring and western countries have identified Korea's East Sea using various different terms. The St. Petersburg Academy of Sciences referred to the East Sea as 'Koreiskoe Mope' or 'Sea of Korea' in their 1745 map of Asia. Other 17th and 18th century Russian maps alternate between 'Sea of Korea' and 'Eastern Ocean.' The 18th century Russian and French explorers Adam Johan von Krusenstern and La Perouse called it the 'Sea of Japan,' a term that became popular worldwide. Nonetheless, the last official map published by the Russians name the East Sea the 'Sea of Korea.' The name is currently still a matter of historical and political dispute between the countries.

Between Formosa and Japan a large island identifies as Liqueo Island is rendered. This is most probably a mismapping of the Okinawa in the Ryukyu Archipelago (of which Liqueo is a failed transliteration).

This map was engraved by Thomas Conder and issued as plate no. 39 in the 1792 edition of Robert Wilkinson's General Atlas.