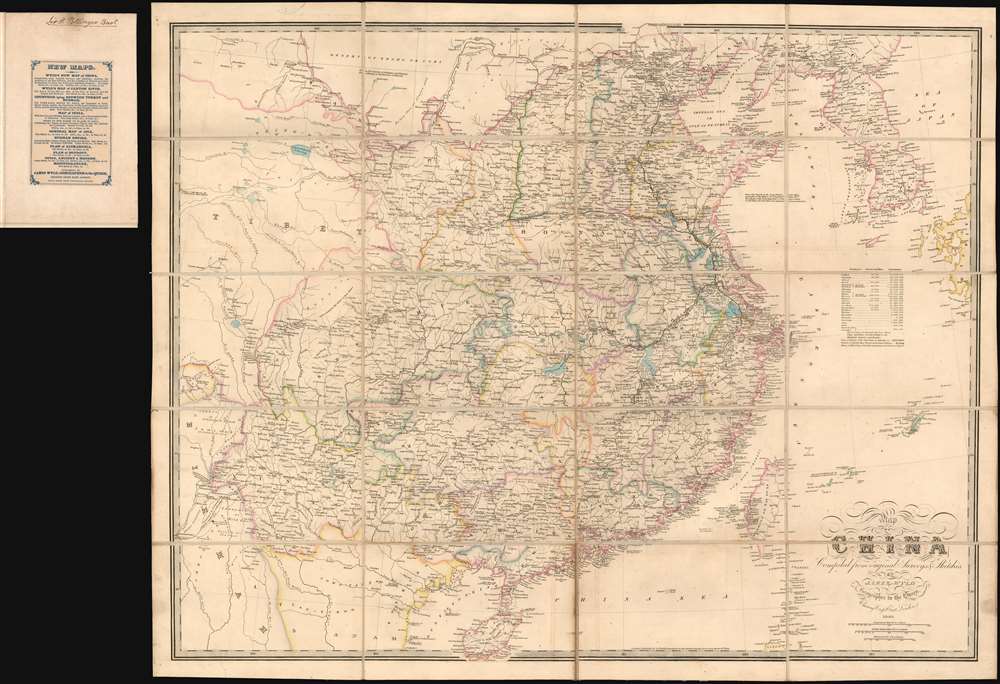 Provenance to the first Governor of Hong Kong.

A beautiful example of the scarce 1840 first edition of James Wyld's First Opium War Era map of China, with provenance to Sir Henry Pottinger, the first governor of Hong Kong, identified here as 'Heong Kong'. The map covers all of China, extending from the Tibet border to western Japan and from Manchuria to Hainan. Korea, rendered in full, is wildly malformed. Taiwan, appearing near the cartouche, is misshaped and only the western coast features any detail. There are notes in industry, transportation networks, the great wall, population, trade resources, and more.

In 1839, the Daoguang Emperor, seeking to stem the tide of narcotic addiction in China, banned opium entirely and blockaded China’s only open trade port – Canton (modern day Guangzhou). They also seized and destroyed nearly 20,000 chests, roughly 1200 tons, of opium. Foreign traders within Canton were confined to their offices without access to outside food or supplies – essentially forcing them into a ‘capitulate or starve’ situation.

The British subsequently dispatched a naval and military force to China. The Royal Navy used its cannon power to inflict a series of decisive defeats on the Qing at various Chines ports, forcing them to the negotiating table - a tactic later referred to as ‘gunboat diplomacy.’ By 1842, when this map was drawn, the Qing were forced to sign the Treaty of Nanking, the first of the Unequal Treaties. The Treaty of Nanking created five open treaty ports and ceded Hong Kong to the British Empire. The Opium trade quickly resumed, but escalating tensions led to the Second Opium War (1856 - 1860) just 14 years later in 1856.

The First Opium War as essentially about trade, and so is this map. Throughout, Wyld offers a wealth of detail regarding trading and resources throughout China. He identifies black tea regions, green tea regions, cotton fields (near Shanghai), china ware manufactories, silk worm lands, varnish trees, rice grounds, limestone, blue nankeen manufactories, and a place where 'silken fowls are bread.'

Lieutenant General Sir Henry Pottinger, 1st Baronet, (砵甸乍, October 3, 1789 – 18 March 18,1856), was an Anglo-Irish soldier and colonial administrator who became the first Governor of Hong Kong. Pottinger represents the absolute best of the British East India Service. He was born in County Down, Ireland and studied at the Belfast Academy before joining the army in India in 1804. In 1806, he joined the British East India Company, serving as a Lieutenant in the 1809 Anglo-Mahratta Wars. In the following year, he partnered with Charles Christie on a bold expedition to map the route from Nushki (Balochistan) to Isfahan (Central Persia). He and Christie disguised themselves as Muslims, separated ways, and both mapped separated routes, before they rejoined in Isfahan. It would be 100 years before another European took this route. The achievement earned him a promotion to Colonel. He became the Resident Administer of Sindh in 1820, and of in the 1830s. In 1839 word reached India that he was to be ennobled and he returned to England to accept the rank of Baronet.

One year later, in 1841, he accepted Foreign Secretary Lord Palmerston's offer to become envoy and plenipotentiary in China and superintendent of British trade. There can be little doubt that he acquired this map at that time, in anticipation of his voyage to China and subsequent posting. The fact that this is the first edition, 1840, rather than the updated 1841 edition, suggests he must have acquired it in London early in 1841.

…examine with care the natural capacities of Hong Kong, and you will not agree to give up that Island unless you should find that you can exchange it for another in the neighborhood of Canton, better adapted for the purposes in view; equally defensible; and affording sufficient shelter for Ships of War and Commerce.

the retention of Hong Kong is the only point in which I have intentionally exceeded my modified instructions, but every single hour I have passed in this superb country has convinced me of the necessity and desirability of our possessing such a settlement as an emporium for our trade and a place from which Her Majesty's subjects in China may be alike protected and controlled. Of course, he was correct and Hong Kong went to become the crown jewel of British colonial enterprise in the far east. Pottinger afterwards went on to be governor of the Cape Colony in 1847, and Governor of Madras in 1848.

James Wyld first published this map in 1840 to capitalize on British public interest in the First Opium War (1839 - 1842). Subsequent editions were issued in 1841, 1842, 1843, and 1844. While later editions of Wyld's map are reasonably common, the first edition is remarkably rare on the market.

Very good. Original linen stable. Signed by Pottinger on the verso. The second panel from the left, second row from the bottom, has been attached upside down. While a restorer could easily correct this matter, we have left it as is, reflecting an authentic artifact. The map folds into its original slipcase constructed of embossed dark green paper.