1835 Bradford Map of China and Japan 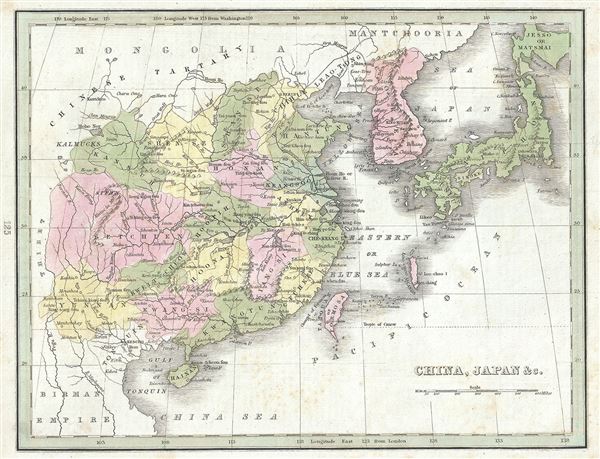 1835 Bradford Map of China and Japan

This is a beautiful 1835 map of China and Japan by the important American mapmaker T. G. Bradford. It covers China from Chinese Tartary to the Kingdom of Tonquin (modern day Vietnam) and from Yunnan to Corea (Korea).  Taiwan or Formosa (alternately labeled Taiouan) is mapped vaguely, representing the poor knowledge of the region prior to the Japanese invasion and subsequent survey work in 1895. Macao is identified. The Great Wall of China is clearly rendered. The disputed body of water between Korea and Japan is here identified as the Sea of Japan.

Bradford's map reveals China just prior to the First Opium War. In the early 19th century Asia was increasingly coming under imperial European sway. By the 1830s, oversaturation of the Chinese market slackened Chinese demand for most British products. To make up for the trade deficit, British merchants introduced Indian opium to China.  Addictive and cheap, Opium became Britain's most profitable and important crop in world markets, pouring into China faster than tea poured into Britain. Opium addiction and its attendant social ills reached such catastrophic levels that the Chinese government took action and destroyed British opium stores in Canton. As this threatened English commercial interests, the crown responded, sparking the Opium Wars of 1839-1842. The superior British forces took complete control of Canton, occupied Shanghai, and blockaded Chinese ports, forcing the Chinese to sign the 1842 Treaty of Nanking. This unequal treaty (the first of many between European powers and China) would grant Britain extensive trading rights in China.

The map was published as plate no. 125 in Thomas G. Bradford's 1835 Comprehensive Atlas Geographical, Historical and Commercial.  Bradford's atlas, published in 1835 was an important work on many levels.  First, it was one of the first American atlases to follow an encyclopedic format, offering readers extensive geographical and statistical tables to supplement the maps themselves.  Second, it was published in Boston and influenced the city's rise as a publishing center later in the 19th century (at the time most publishing in the United States was restricted to New York and Philadelphia).  Third, this atlas was the first to contain a separate and specific map showing the Republic of Texas.  Fourth and finally, Bradford's atlas in some instances broke the Euro-centric mold regarding atlas production.  Among other things, Bradford focused his atlas on the Americas and abandoned the classical decoration common in European atlases in favor of a more informational and inherently American approach.