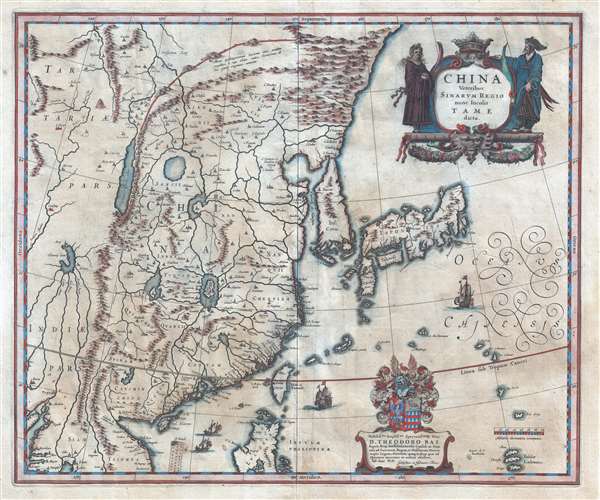 Map showing Korea as an Island!

An important c. 1636 map of China, Korea, and Japan by Willem and Johannes Blaeu. The map covers East Asia from Lake Chiamay (apocryphal) to Japan and from Mongolia to the Philippines. Blaeu’s map represents the most complete illustration of China and East Asia in general available at the time.

Blaeu’s map represents the first major advancement over Abraham Ortelius’ map of East Asia published in 1584. It closely follows both Ortelius 1584 and Hondius 1606 with several major advancement attributable to Jesuit missionary activity in the region. Most notable is a far more sophisticated mapping of Korea. Although still an island, as introduced by the Hondius map, Korea has begun to take on a fare more accurate form. The peninsula’s squarish base attended by various islands would be followed by many subsequent cartographers until formally revised by D’Anville in the 18th century. Among other features the cartographer identified the ‘I. de Ladrones’ or modern day Jeju Island. Forher more Taiwan, her identified as ‘Pakan al I. Formosa’ is at last recognizable with three place names Gillira, Wanakn, and Taroan noed.

The mythical Lake of Chiamay appears a the western extreme of the map, roughly in what is today Assam, India. Early cartographers postulated that such a lake must exist to source the four important Southeast Asian river systems: the Irrawaddy, the Dharla, the Chao Phraya, and the Brahmaputra. This lake began to appear in maps of Asia as early as the 16th century and persisted well into the mid-18th century. Its origins are unknown but may originate in a lost 16th century geography prepared by the Portuguese scholar Jao de Barros. It was also heavily discussed in the journals of Sven Hedin, who believed it to be associated with Indian legend that a sacred lake, Mansarovar, linked several of the holy subcontinent river systems. There are even records that the King of Siam led an invasionary force to take control of the lake in the 16th century. Nonetheless, the theory of Lake Chiamay was ultimately disproved and it disappeared from maps entirely by the 1760s.

The lower cartouche is the coat of arms of Theodore Bas, a director of the Dutch East India Company or VOC, to whom the map is dedicated. Bas’ patronage would have been highly desirable to Blaeu, who needed the wealthy merchant organization’s patronage to both acquire the most up to date cartographic data as well as to sell his maps.

Blaeu introduced this map in 1636. It was not significantly revised until the 1655 Blaeu/Martini map, which added substantial new information and attached Korea as a peninsula. The map appeared in various editions of Blaeu’s Le Theatre du Monde, ou, Nouvel Atlas.