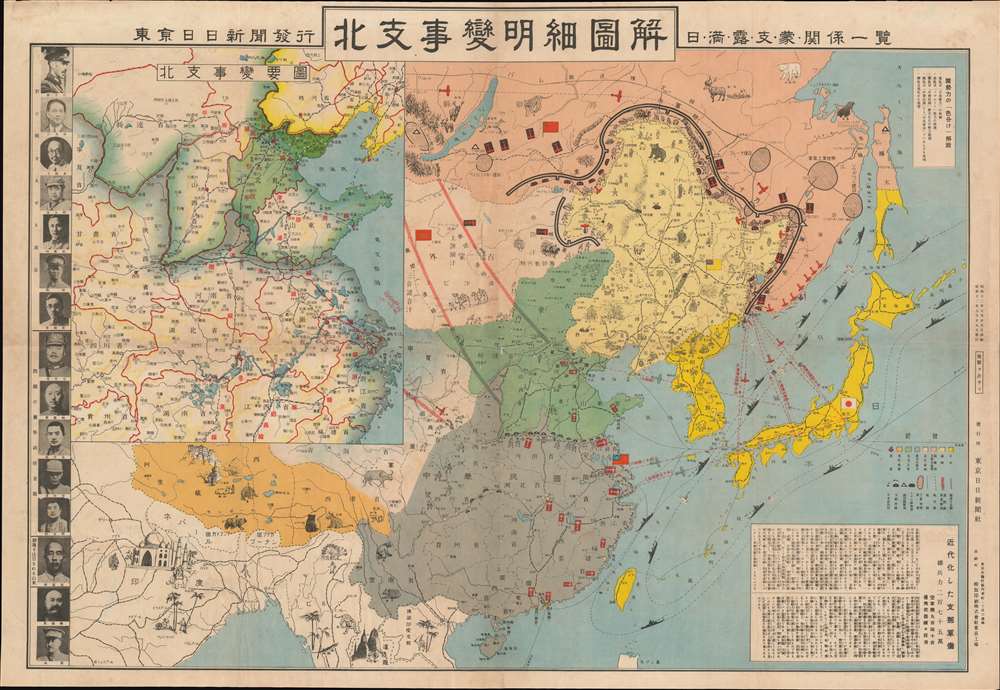 The Marco Polo Bridge Incident - What some consider the beginning of World War II.
$1,500.00

This is a rare Showa 12 or 1937 Japanese pictorial map of northeastern China, Manchuria, eastern Russia, Siberia, and Korea issued by the daily newspaper Tokyo Nichi Nichi Shimbun (東亰日日新聞社). This map was published to illustrate the events of the July 7, 1838 Marco Polo Bridge Incident, the opening salvo of the Second Sino-Japanese War (1937 - 1945), and by extension, World War II (1939 - 1945). Centered on Beijing, the main map coves all of East Asia, from India to Japan, and from Siberia to Hainan Island. Pictorial elements, including flags, military aircraft, and battleships, illustrate zones of power and control. Smaller vignettes illustrate regional novelties (such as the Taj Mahal and Angkor Wat), flora, fauna, and resources - practically in Manchuria, the subject of the conflict. While the focus of the map is conflict between Japan and China, the dark defensive line surrounding Manchuria and the presence of Russian aircraft makes clear who Japanese considered to be the primary threat. A smaller map in the upper left details northeastern China. Portraits of Chinese military and political leaders line the left side of the map.

The Marco Polo Bridge Incident, also known as the Lugou Bridge Incident or the Double-Seven Incident, was a July 1937 battle between China's KMT led National Revolutionary Army and the Imperial Japanese Army. It is widely considered to be start of the Second Sino-Japanese War (1937 - 1945). Tensions in Manchuria were already at a high point due to the 1931 Mukden Incident.

The bridge itself is an eleven-arch granite bridge constructed under the Great Jin (大金; - 1234), but later restored by the Kanxi Emperor in 1698. Marco Polo famously references it in his journals, hence the name.

The 'Incident' began with Japanese military exercises outside of the Chinese town of Wanping (宛平城). An unknown contention led to a minor exchange of fire. When the Japanese returned to their base at Fengtai, they found a solider, Private Shimura Kikujiro, missing. Japanese officers demanded that they be allowed enter Wanping to search for the missing private - a demand that the Chinese flatly refused. Blustering commenced, with both sides sending reinforcements. Eventually, around 4AM on January 8, the Chinese Army opened fire on the Japanese at Marco Polo Bridge, roughly 210 meters south of Wanping. While suffering extreme losses, the Chinese were able to hold the bridge and peace negotiations began. While yielding a temporary truce, the peace ultimately fell apart and the Second Sino-Japanese War began in earnest.

While some suggest the Marco-Polo Bridge Incident was staged by the Japanese. More likely, it came about naturally due to high tensions between the Chinese and Japanese in Manchuria. The Japanese, long eager to size Manchuria as a buffer zone against Russia, and exert greater control over China in general, merely took advantage of the opportunity.

The Second Sino-Japanese War was fought between the Kuomintang (KMT) led Republic of China and the Empire of Japan between 1937 and 1945. Generally, the war is considered to have started with the July 7, 1937 Marco Polo Bridge Incident. Following the Battle at Marco Polo Bridge, Japanese forces proceeded to capture both Beijing and its port city of Tianjin. Most believe that the war staged by the Japanese who wanted greater influence in China and more control over the resource and labor rich Manchuria. After five months of fighting wherein the Japanese were mostly victorious, the puppet state of Manchukuo was created. Puyi, the exiled last Qing Emperor of China, was installed as its ruler. Following the Japanese attack on Pearl Harbor on December 7, 1941, the Second Sino-Japanese War is usually folded into the China-Burma-India Theater of World War II, which accounted for the majority of casualties during the Pacific War. The war ended in August 1945, following the American bombings of Hiroshima and Nagasaki. The Empire of Japan unconditionally surrendered to the Allies on September 2, 1945, bringing an end to the largest Asian war of the 20th century.

This map was printed by the Tokyo Nichi Nichi Shimbun (東京日日新聞) on July 25, Showa 12 or 1937. It was released on July 29, four days later. The map proved popular in Japan, but is now scarce on the market. We have identified examples at Harvard, the New York Public Library, the University of Alberta, the National Library of China, the Diet Library, and the National Library of Australia.