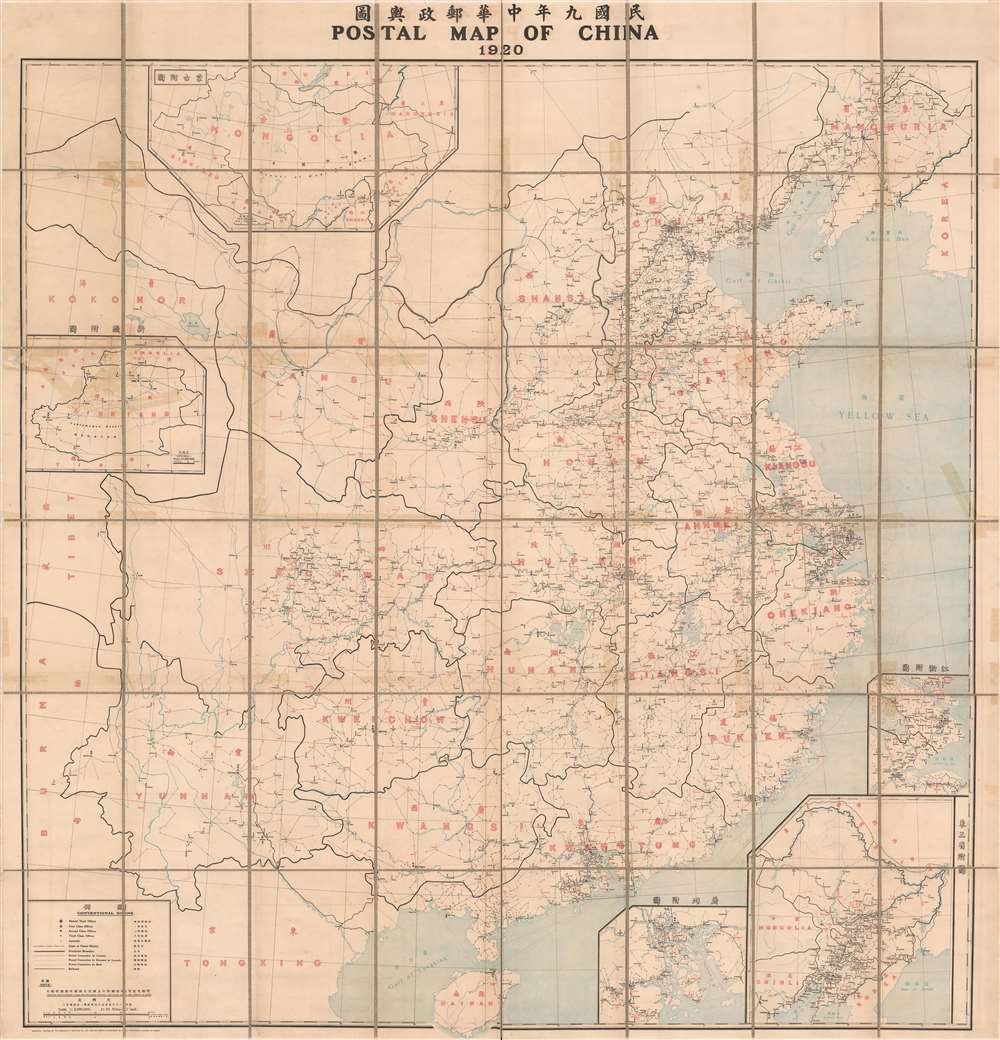 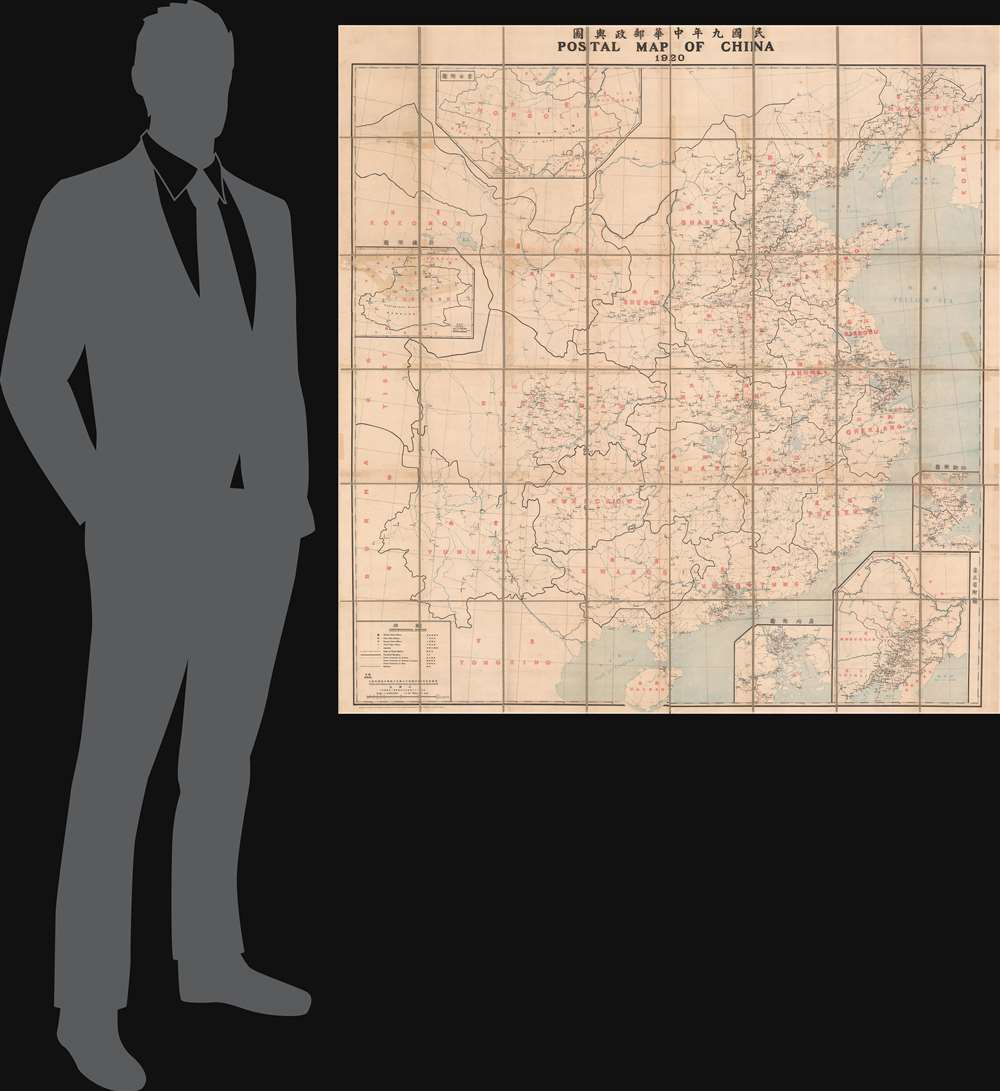 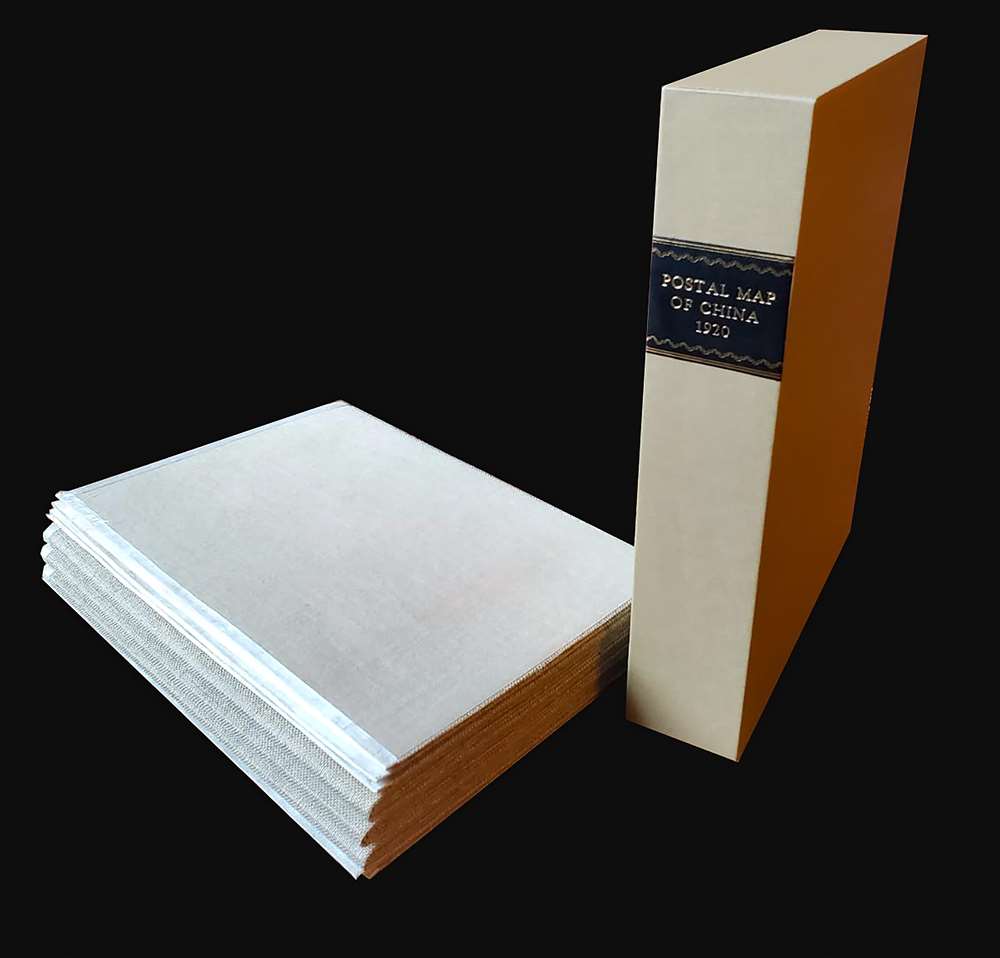 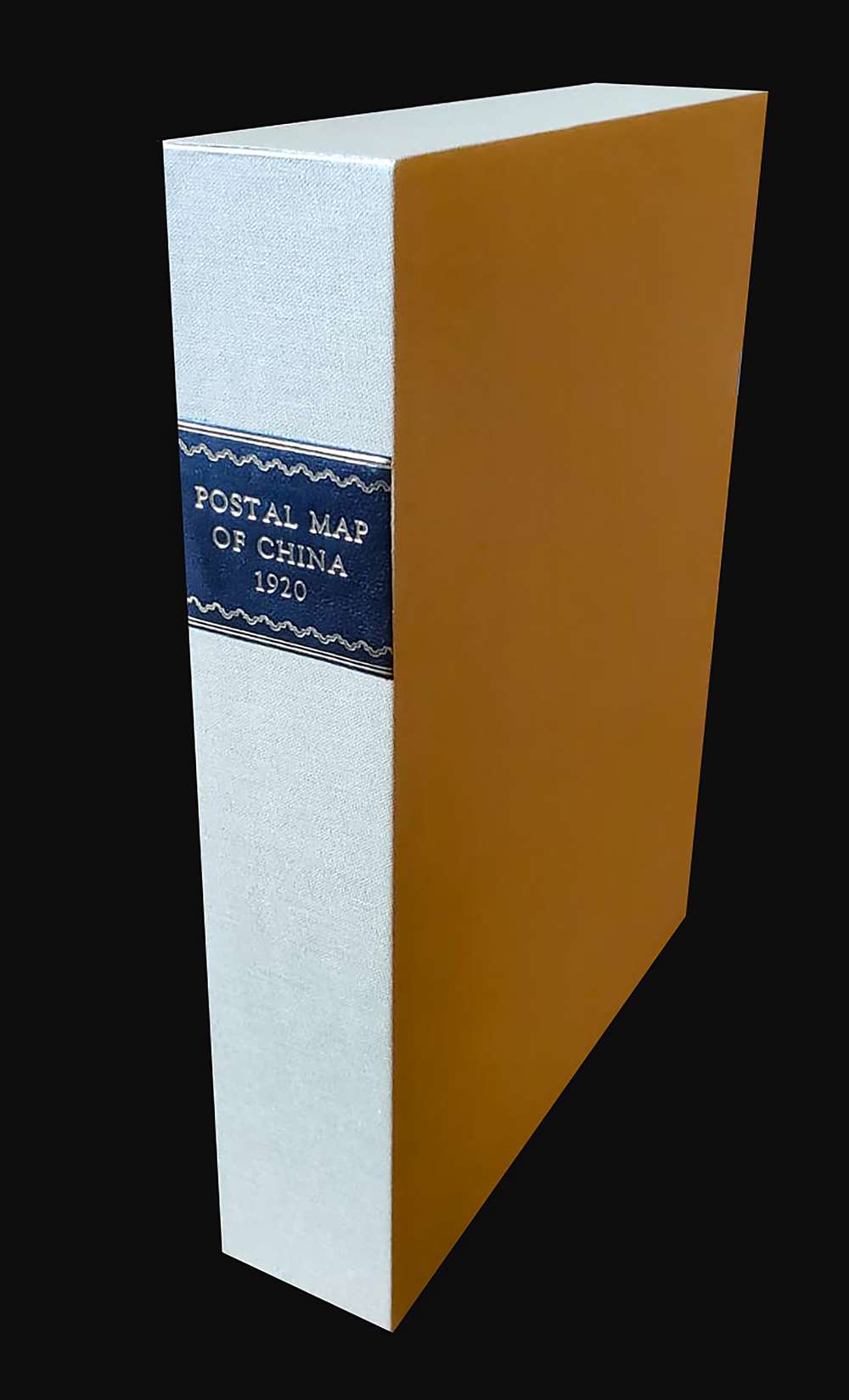 This is a large 1920 bilingual folding map of China produced by the Directorate General of Posts (Youzheng zongju 郵政總局). It illustrates the evolving postal network of China, an impressive feat by the Directorate given the political upheavals and lack of infrastructure at the time.

This map presents the postal system of China in the early part of the Republican period (1912 – 1949). It covers the territory that was nominally under the control of the Republic of China, based in Beijing. In reality, much of this territory was ruled by warlords, foreigners, or non-(Han) Chinese people with aspirations of independence. Still, as discussed below, the postal service was an important link tying the provinces of the former Qing empire together and providing a basis for some degree of national unity.

To the top-left are inset maps of Mongolia and Xinjiang, areas where the Chinese government's authority was heavily contested. The establishment of postal infrastructure in these harsh and vast environs was a remarkable accomplishment. Conspicuously absent is Tibet, which was for all intents and purposes independent at this time (and also lacked postal infrastructure). Qinghai (Amdo), a nomadic region that was part of a larger Cultural Tibet, is denoted in English here by its Mongol name, Kokonor. Curiously, one post office was built in the province at Tulansze (Dulansi, 都蘭寺), a Tibetan Buddhist monastery, which the 1919 annual report of the Directorate points out was a temporary measure until a permanent post office could be constructed. Additional inset maps at bottom-right depict Manchuria, the Guangzhou (Canton) region, and the Shanghai region.

Postal infrastructure basically followed the railways, with the greatest density near Beijing and southwards to Hankou along the Jinghan Railway, in Manchuria along the South Manchuria Railway, and around Shanghai and Guangzhou. An exception was populous Sichuan Province, which because of difficulties with the terrain did not have intercity railway connections until the early 1950s. Shipping lines were also employed to connect major ports along the heavily-trafficked southeastern coast.

The history of postal services in China can be traced back into Antiquity and China was integrated into the very advanced Mongol postal relay system (Yam or Örtöö) that allowed information to travel very quickly across the vast empire. But modern postal services for the everyday use of the populace only appeared in the late 19th century, most notably in 1896 when the Youzheng zongju was formed, initially as an office within the Imperial Maritime Customs Service. Like the Customs Service, it was tied to the Chinese state but operated independently and built a reputation for professionalism, staffed by a multinational corps of bureaucrats. Through the upheavals of modern Chinese history, including political disintegration and warfare in the early 20th century, the postal service was an important link binding together the former Qing empire and providing a basis for future national reunification. It also helped maintain connections between overseas Chinese and their homeland by managing correspondence and remittances.

China under the Beiyang Government

When uprisings across China flared up in the autumn of 1911, the court in Beijing relied on the modernized Beiyang Army led by Yuan Shikai (袁世凱) to fight the revolutionaries. But when the regime was clearly doomed, Yuan switched sides and negotiated an abdication edict from the Qing in exchange for having himself set up as the first President of the Republic of China. The new regime, informally known as the Beiyang government, attempted a series of modernization projects, but lacked the resources to enforce its will throughout the country. Yuan tried to build authority around himself and his inner circle to overcome these problems, but only succeeded in spurring corruption and provoking opposition, leading to a rival republic being founded in southern China. Yuan even tried to establish himself as the first emperor of a new dynasty, a move that backfired and weakened his regime even further.

Former generals and governors of the Qing came to operate largely independently of the national government, collecting their own revenue and raising armies loyal to themselves. Several efforts at national reunification failed and warfare between competing 'warlords' became incessant. Yuan Shikai died in 1916, setting off the Warlord Era, but his troubled government continued as the titular national government until 1928, when a partially successful reunification effort led by the Guomindang (Kuomintang) captured Beijing and moved the capital to Nanjing.

This map was made by the Youzheng zongju in 1920 and published by the Mercantile Printing Company in Shanghai. It is included in the institutional collections of a handful of universities in North America, Europe, and Asia, and is scarce to the market. Several maps were produced during the Republican period by the Youzheng zongju with the same Chinese title as this map (中華郵政輿圖) but this edition is among the earliest. It is unclear what, if any, relationship exists between these maps and the Postal Atlas of China published in four editions between 1907 and 1936 by the Youzheng zongju under the direction of the Swiss geographer Charles Jacot-Guillarmod (1868 - 1925).

Youzheng zongju (郵政總局; 1896 - 1949), known in English as the Inspectorate General of Posts or Imperial Chinese Post under the Qing Dynasty and the Directorate General of Posts, Chunghwa Post, or simply the Chinese Post Office after 1911, was the primary postal service operating in China during the years of its existence. It was created in the wake of the First Sino-Japanese War, a series of reforms meant to account for China's weakness vis-à-vis its much smaller but more modernized neighbor. After the Qing collapsed and China entered a period of political fragmentation, the postal service was an important basis for building national identity and the hopes of national reunification. Like the Maritime Customs Service, of which it was originally a branch, the postal service was nominally a part of the Chinese state (under the Ministry of Communication) but was independently managed and staffed with many foreigners, especially at the senior level. This insulated it somewhat from the incessant political and military struggles of the Republican Era (1912 – 1949) and allowed it to operate across jurisdictions, even in some Japanese-occupied areas during the Second World War (Second Sino-Japanese War). At the same time, it came under increasing control from the late 1920s onwards, as the government of Chiang Kai-Shek aimed to centralize power and enforce censorship, a harbinger of its future after the Communist takeover in 1949 (when China Post was formed, retaining the name Youzheng zongju in Chinese until it was partially separated from the government and established as a state-owned enterprise in the 1990s and early 2000s). Learn More...


The Mercantile Printing Company (c. 1913 – 1938) was a publisher of English-language and bilingual books and maps based in Shanghai, China. Notably, it published postal and road maps of China. Learn More...