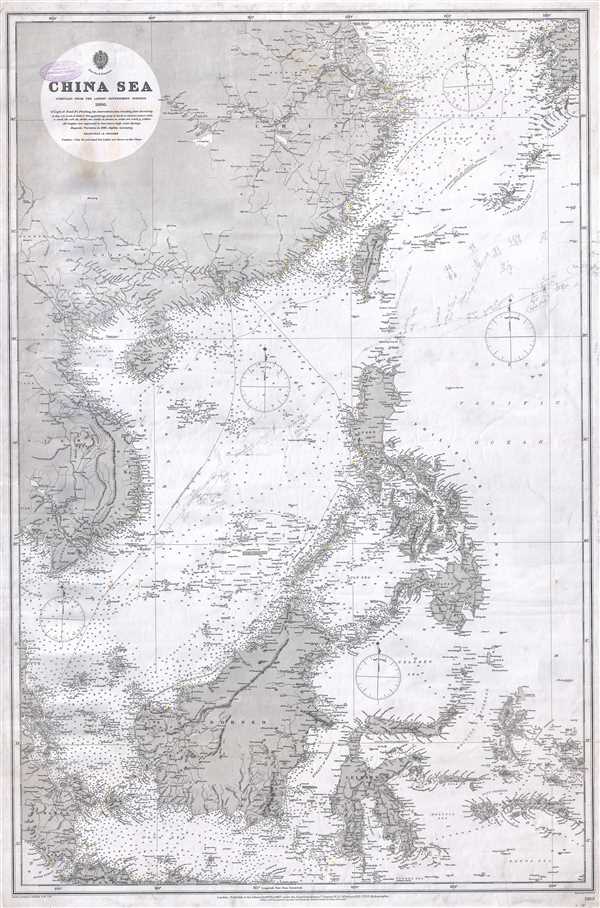 Rare nautical chart detailing the voyages of Captain Anderson and the Albania from New York to Yokohama.

A scarce 1886 / 89 British Admiralty Hydrographic Office nautical chart or maritime map of the China Sea. This map is the China Sea general chart covering from 7° South to 35° Latitude, inclusive of the Philippines, Taiwan / Formosa, China, Cambodia and Vietnam, and Singapore. In addition to a wealth of nautical detail and practical information for the mariner, this map also offers excellent inland detail particular along navigable inland waterways including the Yangtze and Mekong Rivers. Depth sounding proliferate throughout.

This is a working nautical chart that was owned by the Thomas Reese Anderson, the New Brunswick captain of the ship Albania, a 1438 Ton vessel (of the Taylor Brother's feet), which made a historic run between Yokohama, Japan, Singapore and New York. This chart was used for charter voyage made in 1891 departing New York on the 25th of February and arriving in Yokohama on July 9th. The chart features numerous pencil annotations relating to this voyage. The Albania was built in 1884 in the shipyards of St. John, New Brunswick by O. Pittfield. Today Anderson's voyage to Japan is an important reference for maritime historians due to the detail of Anderson's surviving documents archived at Mount Allison University.

Following this voyage, where Anderson apparently had a dalliance with a Japanese woman, he retired form sailing and became a man of means in his hometown of Sackville, New Brunswick. He invested in various businesses including a railroad line. Sadly, this was his demise. Anderson was killed by a shunting train engine in 1918.

This map was originally published in 1886. It features major updates to 1887, and minor revisions to 1889. In the upper left quadrant it bears the stamp of Philip, Son & Nephew, agents for Admiralty Charts based in Liverpool, England.

National Library of Australia, 43958955.
Looking for a high-resolution scan of this?