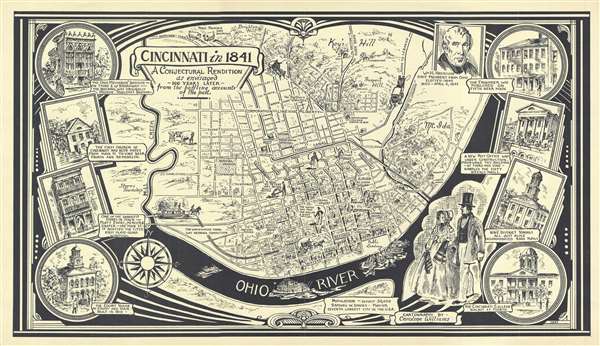 This is a 1941 Caroline Williams pictorial map of Cincinnati, Ohio in 1841. The map depicts Cincinnati from Key's Hill and Brighton Hill to the Ohio River and from Mill Creek to Mt. Ida and the Ohio River. Beautifully sketched, details of downtown Cincinnati abound. All of the streets are labeled, along with numerous locations around the city, including the medical college, the Western Museum, Christ Church, the building where the Cincinnati Enquirer was published, and the Court House. Each of these buildings, along with others, are illustrated in profile. Facts about life in Cincinnati are also included, such as that the Whitewater Canal was nearly completed, and that the Watch was paid one dollar a night. The central map is framed by several vignettes of buildings around the city which are accompanied by captions, which identify the buildings and their locations. Some of the sketched buildings include the Ohio Mechanics' Institute, Platt Evens, Mercer and Draper, 'one of the swankiest stores in town', and the Court House. Around the views of the buildings, numerous other sketches area included as well, such as a sketch of a high-society couple and a portrait of William Henry Harrison, the first president from Ohio. A box along the bottom border provides three facts about Cincinnati circa 1841: the population, which was nearly 50,000, the mayor's name, Samuel W. Davies, and the fact that Cincinnati was the seventh largest city in the United States at the time.

This map was sketched and published by Cincinnati resident Caroline Williams in 1941.

Caroline Williams (November 10, 1908 - 1988) was an artist from Cincinnati, Ohio renowned and celebrated for her ‘A Spot in Cincinnati’ series of sketches, which appeared in the Cincinnati Enquirer from 1932 until 1979. She was recognized for the incredible amount of research she did for each of the captions for her sketches, adding much to local knowledge of Cincinnati. She was born in Covington, Kentucky and grew up in Cincinnati, where her father found a job as a staff artist at the Cincinnati Enquirer. He would rise up through the ranks and eventually become the director of the Art Department of the Enquirer, until he died of pneumonia in 1928. Williams grew up in College Hill, a neighborhood in Cincinnati, and then attended the University of Cincinnati for a year, followed by two year at the Cincinnati Art Academy and another two years at the Art Student’s League in New York. She was hired by the Cincinnati Enquirer as a staff artist in 1932, following in her father’s footsteps. Williams gained notoriety, celebrity even, due to her acclaimed series ‘A Spot in Cincinnati’, which began in November 1932. Cincinnatians would eagerly await their Sunday paper to see what would be the next ‘nook’ featured by Williams in her sketches. Over the course of her career, Williams published several books of her sketches and drawing of Cincinnati, and she left her job at the Enquirer in 1945 to become a free-lance artist. From 1945 until her death in 1988, Williams self-published and printed a series of books and prints, having converted the hen house behind her cabin into her own printing studio. Williams is still fondly remembered in the Cincinnati area, and her works remain popular to this day.