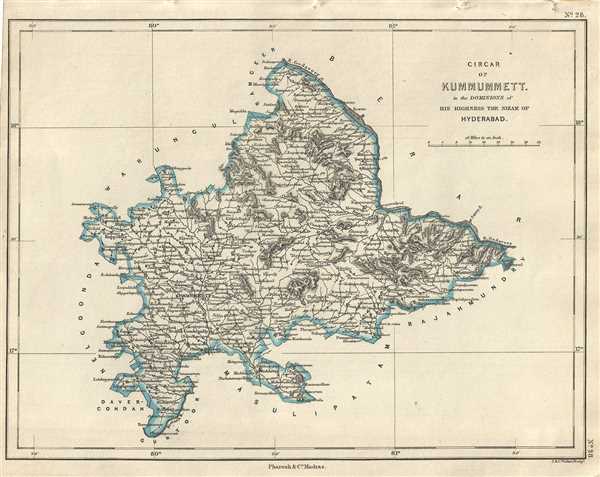 Map of the Khammam province of the princely state of Hyderabad, India.
$250.00

This is an uncommon 1854 map of the Kummummet or Khammam Circar of the Nizam of Hyderabad. The map covers what is today the modern district of Khammam in the Indian state of Telangana from Kondapalli, Andhra Pradesh to Educberlapalle, Telangana. Notes important towns, rivers, roads, and topography.

Circar or Sarkar were historical division of a province used in the Mughal states of India. Khamman or, as it was known at the time, Khammammett or Khammammettu was part of the princely Hyderabad State ruled by the Nizam under the British East India Company. Hyderabad State was ruled by a hereditary Nizam from 1724 to 1948, until the Nizam was overthrown by the Indian Armed Forces following its independence.

This map was engraved by J. and C. Walker and issued as plate no. 28 by Pharoah and Company in their 1854 Atlas of Southern India.