1833 Burritt - Huntington Map of the Constellations of the 2 Hemispheres 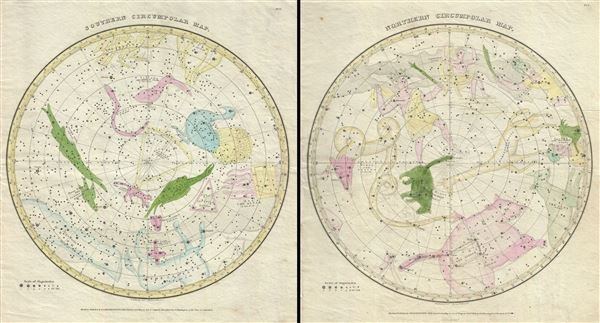 1833 Burritt - Huntington Map of the Constellations of the 2 Hemispheres

This is a beautiful hand colored set of the northern and southern circumpolar maps by Elijah Burritt. This pair of maps illustrates the night sky and constellations of both the northern hemisphere and southern hemisphere respectively. Constellations are drawn in detail and include depictions of the zodiacal figures the stars are said to represent.

Included on these two charts are Ursa Major (Great Bear or Big Dipper), Ursa Minor (the Little Bear or Little Dipper), Draco (the Dragono), Cassiopeia (the W), Perseus, Camelopardalis, and Cepheus in the Northern Hemisphere, and Hydra (the Snake), Dorado (the Sword Fish), Pavo (the Peacock) and the Centaur in the Southern Hemisphere. Both charts are quartered by lines indicating the Solstitial and equinoctial Colures. Both maps are quartered by lines indicating the Solstitial and Equinoctial Colures. These maps, like all of Burritt's charts, are based on the celestial cartographic work of Pardies and Doppelmayr. The maps were created by E. H. Burritt and issued as plate nos. V and VI in the Second Edition of F. J. Huntington's Atlas, Designed To Illustrate The Geography Of The Heavens. The present example is exceptional in that only a small percentage of the first edition of Burritt atlases featured individually colorized constellations. This edition also shows a relatively early form of illustrations. In most subsequent editions, the constellation charts received a general, but non-specific wash and more detailed illustrations.

Very good. Overall age toning. Some foxing throughout. Manuscript markings in pencil on the Northern Circumpolar Map, can be easily erased.