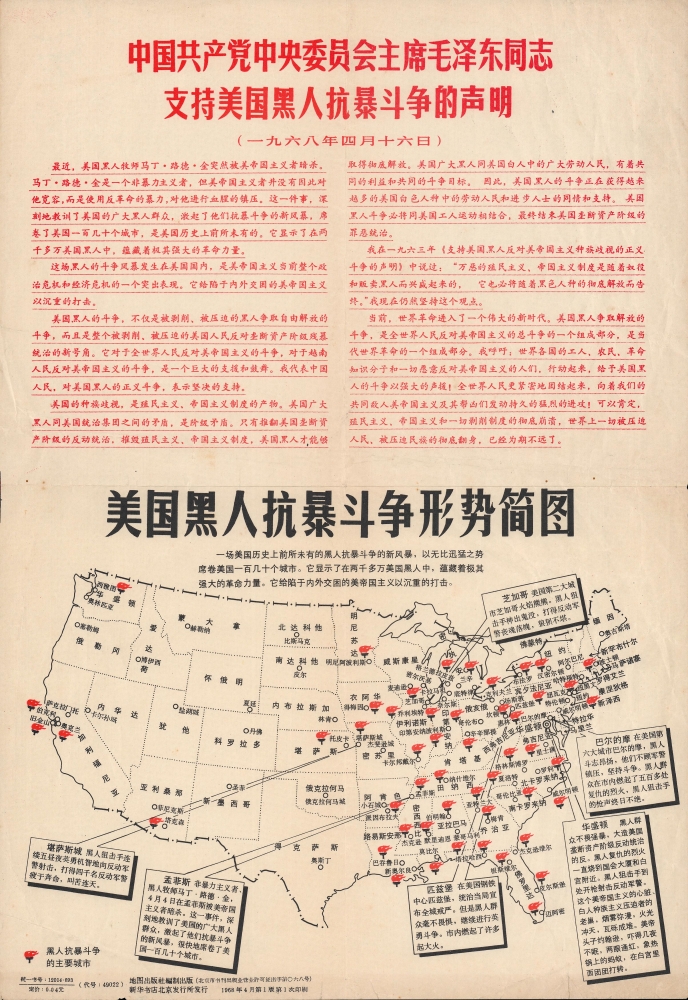 A fascinating document of transnational persuasive cartography from the Cold War era, this is a Chinese propaganda piece touting support for the American Civil Rights Movement in the wake of Martin Luther King's 1968 assassination. The lettersheet was issued following the a assassination of Martin Luther King, Jr. on April 4 of that year. Directed at a domestic audience, it reflects the wider political and geopolitical context in which it was produced.

This sheet is divided roughly in half, with the top half including the text of the 'Statement of Comrade Mao Zedong, Chairman of the Central Committee of the Communist Party of China, in Support of the Black Americans' Struggle against Oppression,' issued on April 16. The bottom half is a map of the United States with the location of riots or uprisings across the United States, noting the torching of buildings 'near the Capitol and the White House' in Washington, D.C., the brave struggle against 'reactionary military police' in St. Louis and Chicago, and similar notes from events in Baltimore, Pittsburgh, Memphis, as well as a general explanation below the title of the map. In the text at top, Mao relates Black Americans' struggle against racism to a wider fight against imperialism and capitalism, themes he had developed in previous writings on the civil rights movement in the U.S., in particular his 1963 'Statement Supporting the American Negroes in Their Just Struggle against Racial Discrimination by U.S. Imperialism.'

Chinese Communist interest in the U.S. civil rights movement was part of a wider outreach effort to fulfill Mao's dream of developing a global anti-imperialist movement. This included support for social movements in Western countries, such as workers, students, and, in the American context, civil rights activists. Mao could justifiably claim to be the first non-white leader in the Communist pantheon, and as such was an inspiration to anti-racist and anti-imperialist social movements across the globe. Chinese commentary on the U.S. civil rights movement was not new: in addition to Mao's 1963 statement mentioned above, the Chinese tried to convince African-American prisoners of war to remain in China during and after the Korean War, while Mao invited W.E.B. DuBois (in 1959) and Robert F. Williams (in 1964) to visit China and meet with him. Some leading members of the Chinese Communist Party and non-party intellectuals had studied in the United States before 1949 and were well-familiar with racism against both Asian and African-Americans.

Simultaneously, at least some civil rights activists also began to view China as an ally and a model. During World War II (1939 - 1945), the singer Paul Robeson became a prominent supporter of China's war effort and developed ties with the Communists that would carry into the Cold War era. Later, Malcolm X spoke approvingly of the Chinese Communists. Maoism was a particularly strong influence on the Black Panther Party, which readily handed out copies of Quotations from Chairman Mao Tse-tung, popularly known as the 'Little Red Book,' to those interested in their movement. In the months and years following this map's publication, several leading members of the Black Panthers were invited to visit China, but the decline of the party's influence under intense government pressure as well as the rapprochement in U.S. - China relations during the 1970s ended these outreach efforts.

The domestic politics of China at the time of this map's publication are important to keep in mind. China was in the throes of the Cultural Revolution (1966 - 1976), Mao's attack against his own system, designed to separate entrenched party bureaucrats from the true revolutionaries. Though the movement wreaked havoc on China's society and economy, it was becoming institutionalized, with Mao hailed as a godlike figure, a beacon for both China and the world.

China's contemporary geopolitical posture is also important for understanding this map. China armed and financed the North Vietnamese and, by extension, the Viet Cong. The constant references to American imperialism were made primarily with the ongoing Vietnam War (1955 - 1975) in mind. From this perspective, Mao is right to link anti-imperialism and class struggle with the civil rights movement, as Black Americans and working-class Americans were both drafted in disproportionately high numbers. Looking at it cynically, Chinese Communist support for the civil rights movement (and the American labor movement) was meant to undermine America's war effort in Vietnam. However, it is noteworthy that this map and other related propaganda materials were printed and distributed for domestic consumption; whether people believed or understood the connection, the party wanted ordinary Chinese to see the struggle of Black Americans as tied to their own drive for socialism and struggle against imperialism.

The Sino-Soviet Split, a major rift in the Communist world, also lurks in the background of this map. In Mao's telling, the Soviets were not serious about revolution, did not care about anti-imperialist and anti-racist struggle, and sought to dominate other socialist countries. These complaints were informed by historical injustices that China had suffered at the hands of the Russian Empire, not entirely undone by Stalin, as well as a perceived haughtiness of the Soviets which the Chinese viewed as racist. One of Mao's main motivations in launching the Cultural Revolution was to root out Soviet-style 'revisionists' within the party and prevent China from 'walking the capitalist road.' However, the chaos of the Cultural Revolution and China's fierce attacks on the Soviet Union alienated many other socialist countries, particularly those in Eastern Europe. By positioning himself as the true champion of newly independent countries (former colonies) and racial minorities in the First World, Mao could lay the basis for an alternative camp within global leftism.

﻿China Cartographic Publishing House (中国地图出版社; 1954 - present) is the only national-level publisher of maps in the People's Republic of China and is by far the largest publisher of maps in China. The firm was formed with the consolidation of the state-run Xinhua Map Agency and 15 other private press agencies, among them some of the earliest known modern Chinese map publishers dating to about 1900. Its official English name has been changed to Sino Map Press. Learn More...


Xinhua Bookstore (新华书店; 1937 - Present) is the largest and only nation-wide bookstore chain in China. It was founded in 1937 in Yan'an as Guanghua Bookstore under the Propaganda Department of the Communist Party of China. Its name changed in 1942. Chairman Mao Zedong made the four Chinese letter logo in brush writing in 1948. The operation was divided into the People's Publishing House, Xinhua Publishing Plant, and Xinhua Bookstore at the First All-China Publishing Administration Conference in 1951. The chain was reorganized in 2003, falling under control of the China Publishing Group. Xinhua Bookstore has overseas subsidiaries in London, New York City, San Diego, and Manila. Learn More...

Very good. Some wear along centerfold and at bottom edge.