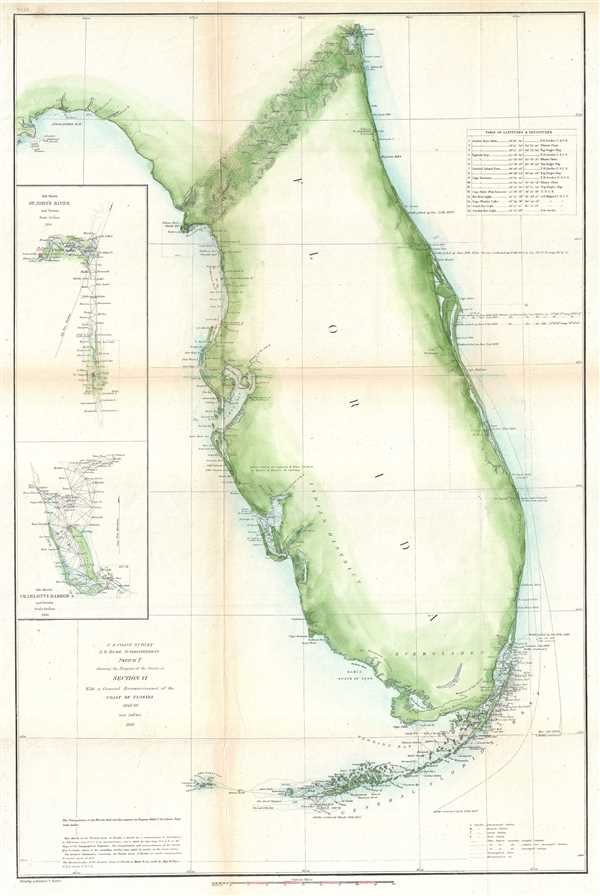 An early triangulation chart of Florida.

A beautiful example of the U.S. Coast Survey's 1860 triangulation chart or map of the Florida Peninsula. This nautical map covers from St. Augustine and Apalachee Bay southwards as far as Key West and the Dry Tortugas. There is an interesting swath of inland detail between St. Mary's and the Cedar Keys – indicating a rather early state of the Florida survey. Triangulation charts of this type were prepared by the Coast Survey before more detailed survey work could take place. They firmly mapped the coastline noting various pointes, inlets, harbors, and Islands. Names Fort Lauderdale, St. Augustine, Key West, and Miami. This particular example features two insets focusing on St. John's River and Charlotte Harbor. The upper right quadrant features a table of latitudes and longitudes identifying major points, cities, and lighthouses. This chart is based upon an initial reconnaissance completed by the Coast Survey's resident Gulf expert, F. H. Gerdes. Published in the 1860 Superintendent's Report under the supervision of A. D. Bache, one of the most prolific and influential Superintendents of the U.S. Coast Survey.