1862 U. S. Coast Survey Map or Chart of the Coast of South Carolina and Georgia 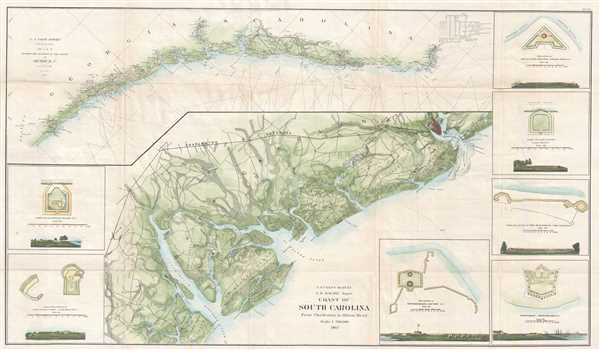 1862 U. S. Coast Survey Map or Chart of the Coast of South Carolina and Georgia

This is an appealing 1862 U.S. Coast Survey nautical chart or map of the coast of South Carolina from Charleston to Hilton Head. Essentially two maps on the same sheet, the top map features a triangulation chart of the coast of Georgia and South Carolina from Amelia Island in Florida to Winyah Bay and Georgetown in South Carolina. It includes Cumberland Sound, St. Catherine’s Sound, Ossabaw Sound, Tybee Roads, Port Royal Entrance and Bulls Bay. This map focuses on inlets and waterways, indicating important channels and stations and shows the progress of the survey work in this area by date-annotated sections.

The second larger map on the sheet details the coast of South Carolina and covers from Hiltons Head Island and Port Royal Entrance past St. Helena Sound to Charleston Harbor. This map offers stunning inland detail identifying the Charleston and Savannah Railroad, roadways, towns and rivers. Shows a detailed street grid for Charleston City and the harbor details coastal features.

This map was compiled under the direction of A. D. Bache, Superintendent of the Survey of the Coast of the United States and one of the most influential American cartographers of the 19th century. Issued in the 1862 edition of the

Report of the Superintendant of the United States Coast Survey, Washington, (1862 edition).