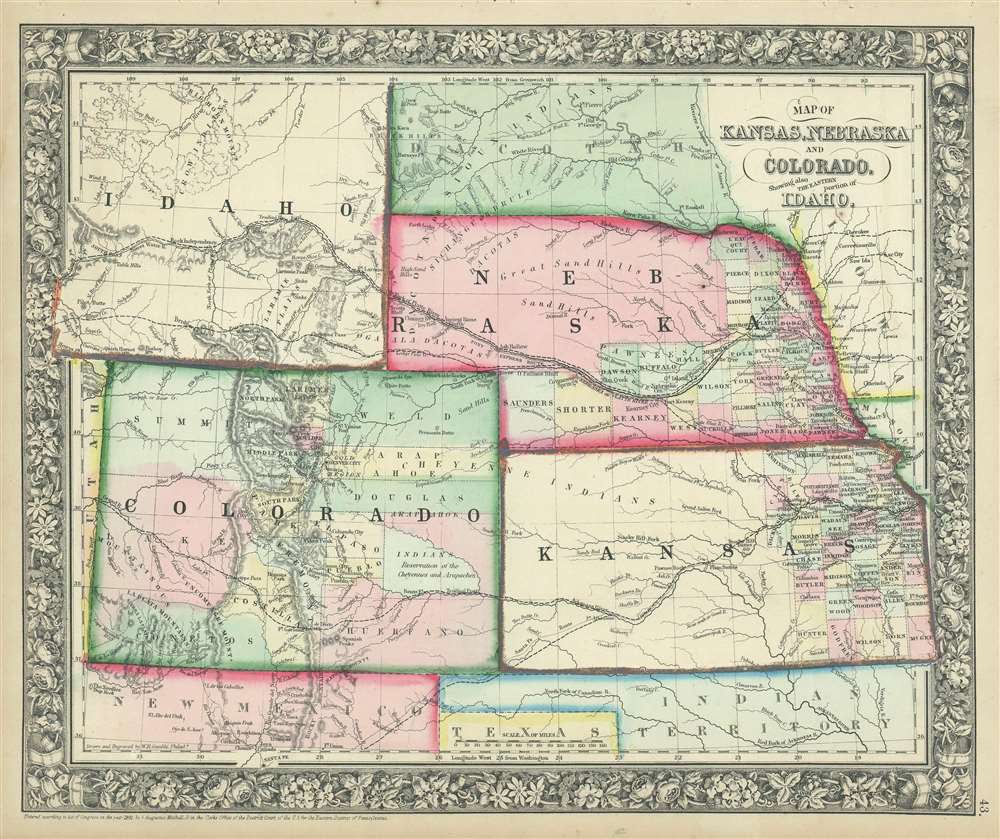 One of the few specific maps to illustrate Wyoming as part of Idaho Territory.
$350.00

A very ephemeral and surprisingly scarce 1863 Samuel Augustus Mitchell, Jr. map of Colorado, Nebraska, Kansas, and that part of Idaho Territory which is today Wyoming. The map depicts the region from the Utah-Colorado border to Iowa and Missouri and from the Big Horn Mountains to northern Texas and Santa Fe, New Mexico. This map holds the distinction of being one of the few to include Wyoming as Idaho Territory, which was formed in March 1863. The iteration of Wyoming/Idaho as seen here is exceptionally ephemeral and present only in this edition (1863), with subsequent editions (1864 - 1868) attaching Wyoming to Dakota (See below). Apart from this rare iteration of Idaho Territory / Wyoming, other intriguing aspects of this map include the fact that only about one half of Nebraska and the eastern third of Kansas are illustrated as having been divided into counties, while Colorado only has fifteen counties that vary wildly in relative size. Myriad towns and villages are labeled, along with the Pony Express route and proposed routes for the transcontinental railroad.

The Mapping of Wyoming by Mitchell

This is one of Mitchell's most interesting and and important maps. Since it was published in many editions, Mitchell traces the development of Colorado / Idaho / Wyoming / Dakota from the 1860 creation of Colorado Territory to the 1868 incorporation of Wyoming Territory. This map did not appear in the 1860 first edition of Mitchell's New General Atlas, when this region was still part of Nebraska Territory. Rather, it was introduced in 1861 following the formation of Colorado Territory and the 1859 Colorado Gold Rush. The map went through multiple annual and sometimes semi-annual updates, most of which focused on the Idaho/Wyoming section. Dakota was incorporated as a territory from the northeastern part of Nebraska Territory in 1861 and maps from that period include Wyoming as the 'Southern portion of Dacotah.' After 1863, when Idaho was incorporated as a territory, the map was updated, as seen here, to include Wyoming as the 'Eastern Portion of Idaho.' This edition is exceptionally rare, having been produced for a very brief period. In 1864 Montana was organized as a territory out of eastern Idaho Territory, with what is today Wyoming being stripped off of Idaho and re-attached to Dakota Territory, thus subsequent maps reapply the 'Southern portion of Dacotah.' This lasted until the incorporation of Wyoming Territory in 1868.

This map appeared in the 1863 edition of Mitchell's New General Atlas. For a detailed breakdown of the maps' history, see above. This map was engraved by William Henry Gamble in Philadelphia, first in 1861, then updated annually through 1868, when it was retired and a completely new map was issued. Like many American map publishers of this period, though he did update his maps, Mitchell did not update his copyrights, consequently most examples of this map are dated and copyrighted to 1861. The present map features the attractive floral border common to Mitchell atlases between 1860 and 1866.


William Henry Gamble (November 4, 1835/6 - September 16, 1921) was a topographical engineer, map engraver, and publisher active in Philadelphia during the second half of the 19th century and in Washington D.C. during the early 20th century. Gamble was born in Philadelphia. It is unclear where he received his training as an engraver, but most of his work is associated with the firm of William Augustus Mitchell Jr. In 1895, he relocated to Washington D. C. to engrave for the U.S. Geological Survey and remained active with that institution until his death, at 85. His obituary claims that, at the time, he was the oldest active government employee. In the 1860s his offices were at 29 South 6th Street, and by the 1870s, at 814 N. 12th Street. He maintained this address until relocating to Washington D. C. to take work with the Geological Survey. In Washington D.C. he lived at 1329 Gallatin Street. Learn More...

Mitchell, S. A., Mitchell's New General Atlas, containing Maps of the Various Countries of the World, Plans of Cities, Etc., (Philadelphia) 1863.     Mitchell's New General Atlas was published by Samuel Augustus Mitchell, Jr., the son of the prolific cartographer Samuel Augustus Mitchell. Many of the plates are derived from the his father's Mitchell's Universal Atlas, but not directly. The Mitchell's Universal Atlas was initially sold to Thomas, Cowperthwait, and Company in 1849, and again to Charles Deliver in 1856. It was Deliver who introduced the new vibrant color scheme, abandoning the older Mitchell's Universal Atlas green borders and themes for bright reds, blues, and yellows. Samuel Augustus Mitchell, Jr. acquired the Deliver plates in 1859. He added his own floral motif border, but doubled down on the vibrant color scheme, thus introducing to the American public the most vividly colored American atlas of the 19th century. In 1860, he published the first edition of his New General Atlas and, despite a slump in sales during the American Civil War, attained a level of success to rival his father. Mitchell would continue to publish the New General Atlas until 1887, when the firm formally closed.