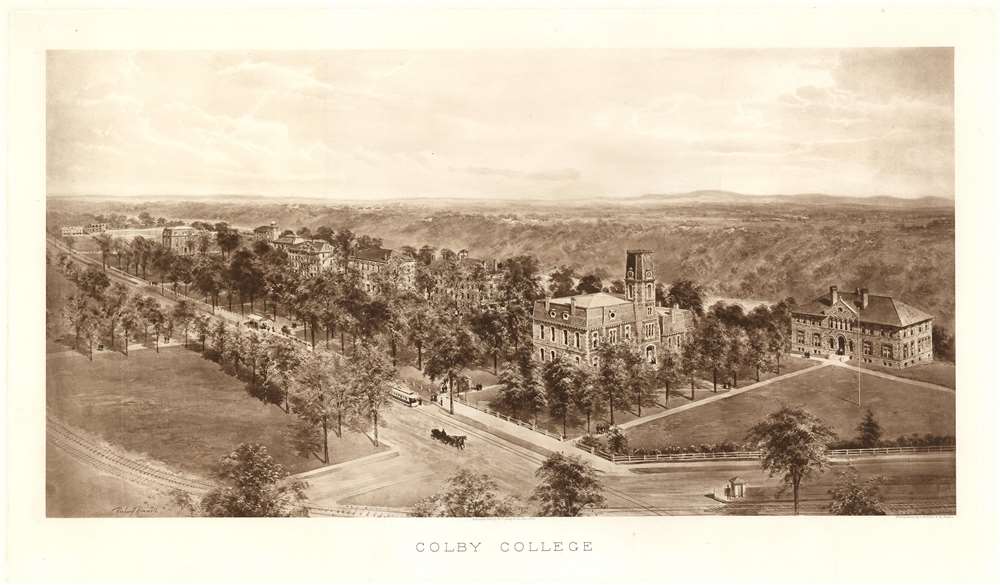 This is a rare 1909 Richard Rummell view of Colby College, a private liberal arts school located in Waterville, Maine. The view illustrates the original campus, of which no buildings survive. The view centers on Memorial Hall, constructed in 1869 to memorialize the Colby men who died in the Civil War and the center of campus life. Prominently featured to the right of Memorial Hall, is Chemical Hall, the home of chemistry lectures and labs, the president's office, and a faculty meeting room. To the left is South College Hall, constructed in 1821, and the campus's first building in downtown Waterville. In the distance the distinctive dome of Shannon Observatory, built in 1889 to the specification of the distinguished physicist William Rogers, who Colby lured from Harvard. The Kennebec River Flows in the background.

Rummell began issuing views of American colleges around 1905. Rummell's views come in several different forms including color, black and white, and as here sepia. Like most of Rummell's university views, it is copyrighted by his publisher, W. T. Littig and Company.

This is the first 1909 printing. It was partially re-engraved and issued in color c. 1913. We have encountered many of Rummell's view over the years, but this is the first time we have seen an original of Colby College.