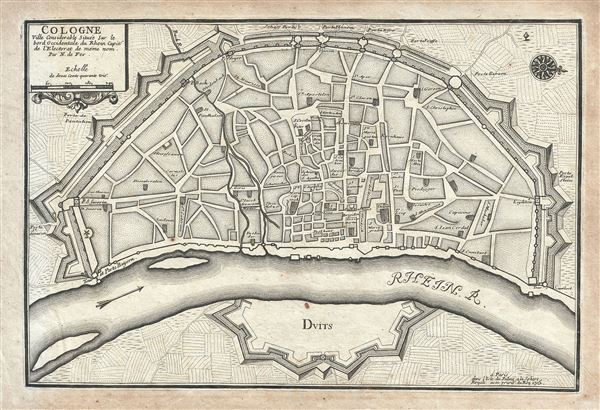 This is a beautiful 1705 Nicholas de Fer map of the walled city of Cologne, Germany. Oriented with North to the right, this map identifies the location of the city on the banks of the Rhine River. Originally the capital city of the Roman province Germania Inferior, Cologne was established in 50 AD. The medieval city wall surrounding the city was built in 1180 and enclosed the Free Imperial City for 600 years. Of the original 12 city gates, only Eigelsteintorburg, Hahnentorburg, Severinstorburg and Ulrepforte remain to this day. The remains of Bayen, the medieval tower and the city wall at Gereonswall can also been seen today.

This map identifies various streets, churches and other notes other topographical details throughout. This map created by Nicholas de Fer in 1705.