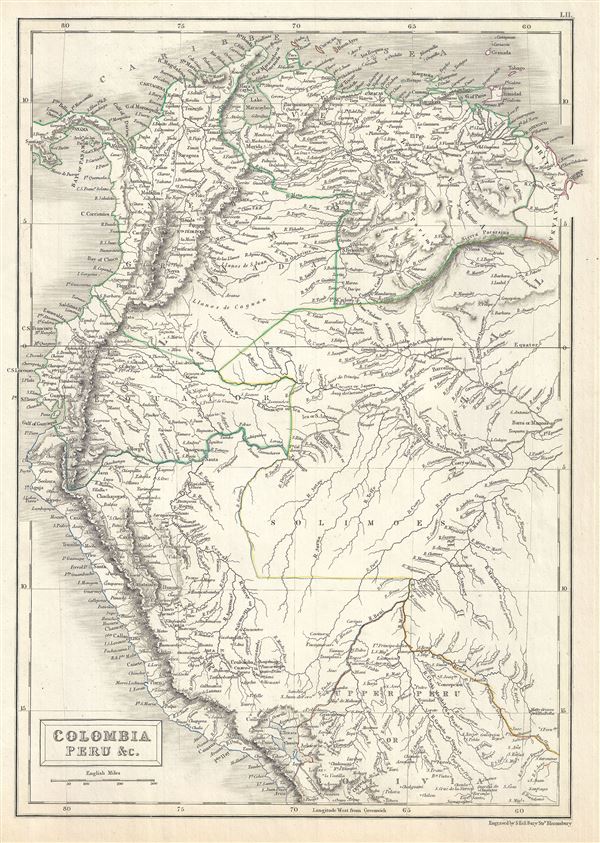 A fine example of Adam and Charles Black's 1844 map of Colombia, Ecuador, Peru, Brazil and British Guyana. This map depicts Gran Colombia or Great Colombia, which included territories of modern day Colombia, Venezuela, Ecuador, Panama, and part of northern Brazil, Peru and Guyana. It covers from Panama to Bolivia and east as far as British Guyana. Bolivia's claims to the Atacama Desert and Peru's claims to the Tarapaca region - both of which are today part of Chile, are shown. Throughout, the map identifies various cities, towns, rivers, mountain passes and an assortment of additional topographical details.

Envisioning an independent New World nation comprising all of the territories under the Spanish and Portuguese colonial rule, the Venezuelan revolutionary Francisco de Miranda suggested a consolidated South American empire named after Christopher Columbus. The idea took hold and in 1819 the territories known as the ‘Viceroyalty of New Granada' (comprising of modern day Colombia, Ecuador, Panama, and Venezuela), became the first South American region to liberate itself from Spain. The region was renamed ‘Gran Colombia.' The war against Spain ended in the mid-1820s when the pro-Spanish loyalists were decisively crushed. The congress of Cucuta adopted a constitution for the new republic in 1821. The vision of Gran Columbia, unfortunately, proved untenable and both Venezuela and Ecuador split off to become independent states 1829 and 1830, respectively.

The map is engraved by S. Hall and issued as plate no. LII in the 1844 edition of Black's General Atlas.