1887 Nell's Map of the State of Colorado - first edition! 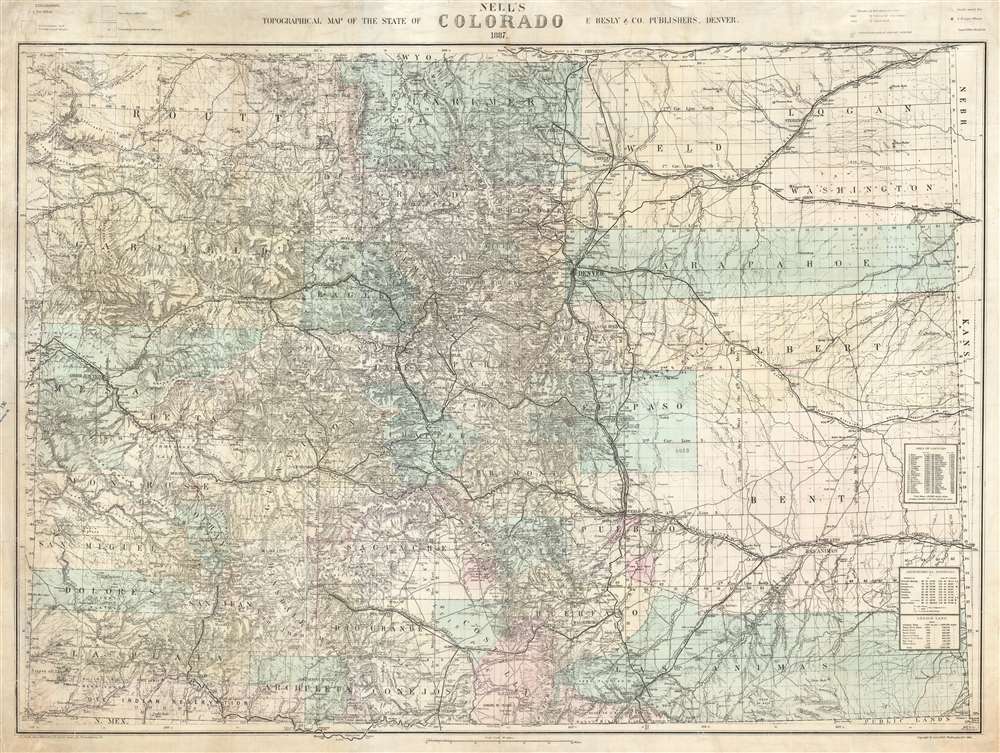 1887 Nell's Map of the State of Colorado - first edition!

This is the very rare 1887 first edition of Louis Nell's separate-issue map of Colorado. It is hands down the largest and most detailed map of Colorado to appear after the 1876 statehood. The map painstakingly illustrates topography, names creeks and streams, shows railroads, identifies footpaths, and more. The map is further broken down into counties and Land Office districts. Native American reservations, military reservations, and mining territories are also named. Mountain peaks, many of which have today become popular ski resorts, are named throughout.

Nell's large format Topographical map series, of which this is the earliest entry, is the most important and detailed sequence of maps of Colorado issued in the latter half of the 19th and early 20the Century. The map was meticulously revised and updated the map during Colorado's most active period of growth. It thus illustrates important changes in political geography, the birth and death of early Colorado cities, the rise of the Colorado Railroad network, and more. This map is thus an essential piece for any serious Colorado collector.

This is the first edition of the larger and more important of Nell's two major maps of Colorado issued in the 1880s. It should not be confused with his Topographical and Township Map of Colorado which was issued from about 1880 and is smaller than the present map. It was prepared by Louis Nell and published by E. Besly and Company of Denver. The map was printed in Philadelphia by J. L. Smith and Company. This map, the Topographical Map of the State of Colorado was first issued, as here, in 1887, with subsequent more common issues in 1889, 1895, 1901, 1903, 1905, 1906, and 1907. Some examples identify as many as 22 editions, but the ones noted here are the only ones we can positively trace.

In any case, the first edition (1887), as here, is exceedingly rare, with only 3 identifiable intuitional collection examples: Denver Public LIbrary, Harvard, and Yale. We have been able to trace only one instance of this edition of the map appearing on the market, in 2005, when it sold at Swann Galleries for 5,000 USD.  We are aware of 2 others in private Colorado collections, possibly one of which is the Swann copy.

Louis Max Nell (January 3, 1842 - January 2, 1908) was a German-American surveyor, explorer, publisher, and map maker. Nell was born in Altenkirchen, Germany and studied in Civil Engineering in Coblentz and Berlin. He emigrated to the United States, arriving in New York in 1865. He issues several maps, including maps of New York, New England, and California. He moved to Washington, D.C. in 1870 to work as a civilian contactor for the Corps of Topographical Engineers. He was sent to Colorado as a topographer with Captain George Wheeler's survey expedition from 1871 - 1879. Impressed with Colorado, Nell left the Corps of Topographical Engineers to settle in Denver. Shortly thereafter, he leveraged the wealth of information collected during the Wheeler survey to compile and issue highly detailed and influential commercial maps of the state. His work eclipsed that of his predecessor in Colorado mapping, H. L. Thayer in scope, detail, and regularity of updates. Nell issued 2 map series focused on Colorado entire: The medium format Topographical and Township Map of Colorado, which was issued from about 1880 to 1906; and the large format, Topographical Map of the State of Colorado, issued from 1886 to 1907. In addition to his work in Colorado, he was a member of the Norther Transcontinental Survey from 1882 - 1883. He was also sent to Alabama to complete surveys in 1888 - 1889 under Major Powell. He continued to work as a draftsman at the U.S. Geological Survey office in Colorado until 1907. He died one year later in 1908. Learn More...


Elbert Besly (fl. c. 1875 - c. 1907) was a publisher bookseller, publisher, and stationer based in Denver, Colorado in the late 19th century. The firm is best known as the original publisher of Nell's Topographical Map of the State of Colorado. The firm, based at 1512 and 1514 Arapahoe, Denver, went out of business in 1896. After leaving the stationers business Besly became president of and acquired controlling interest in the Citizens Commercial and Savings Bank of Denver. Learn More...


John L. Smith (March 19, 1846 - April 1, 1921) was a Philadelphia based stationer, map seller, publisher, and printer active in the late 19th and early 20th centuries. Smith served in the Civil war with Company K, 118th Pennsylvania, the 'Corn Exchange Regiment' from roughly 1862. He served in the Battle of North Anna and Bethesda Church, where he was wounded. He mustered out of service in 1865 and settled in Philadelphia. Smith subsequently worked with Rufus L. Barnes (1794 - 1868), whose business he acquired in 1868. His offices were at 27 South Sixth Street, Philadelphia. He retired from the map business in 1920. Smith rose to prominence and wealth and, when he died, left a large estate of 54,500 USD to charity. He had no children and lived as a bachelor at the Columbia Club, 1600 North Broad Street, until his death of a heart attack in 1921. He had a brother, William C. Smith, who survived him. Learn More...

Very good. Laid down on archival tissue. Minor margin wear.
Looking for a high-resolution scan of this?