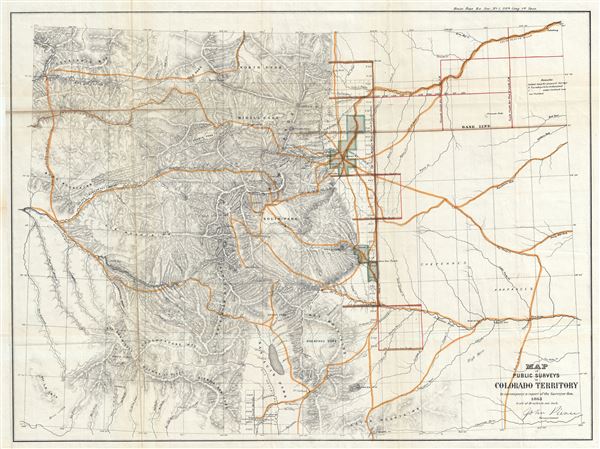 This is a beautiful 1863 public survey map of Colorado Territory. It covers the region from the Escalante Mountains to Julesburg and includes survey work, with the progress of the land survey noted via a series of blocks representing the survey grid. An explanation in the top right quadrant explains the various lines on the blocks. The map identifies the 'Road of Major Wynkoop in July 1863 pursuing the Ute Indians' and 'Berthoud's Wagon road to Salt Lake City.' Gold discoveries around Central City are noted. Several forts are noted throughout, along with other important trails, passes, peaks, rivers, lakes and various other topographical features.

Wheat (1085) considered this an important map,

…a highly polished work, marking the General Land office maps of the previous two years look crude by comparison. One reason for the advance is that to a considerable extent the map is a redrawing of the Ebet-gilpin map of the previous year. It is not, however, a slavish copy, a number of the place names being differently rendered; the upper Colorado River, called 'Bunkara' by Ebert and Gilpin, is 'Grand or Bungarara River' here; 'Roan or Book Mountains' become 'Book Mountains'; and to the many 'parks' named by Ebert and Gilpin is added 'Old Park,' on the headwaters of the White River west of North Park. (That was probably a mistake; the name 'Old Park' had originally been applied by the mountain men to South Park.) A great many new towns have been added, among them 'Laporte,' which net year became Fort Collins. Another feature is that this map shows a trail in northwestern Colorado with a legend, 'Road of Major Wyncoop in July 1863 perusing Ute Indian.' This apparently starts near the junction of the Gunnison and the Grand (or Colorado), makes north to White River and to Bear (Yampa) River at its confluence with the Green, then turns east, going to North Park. Doubtless from the Ebert-Gilpin map, this map picks up 'Berthoud's Wagon Road to Salt Lake City.'

This map was prepared by John Prince, Surveyor General of Colorado Territory for issue in the 1864 congressional report, Message of the President of the United States to the Two Houses of Congress at the Commencement of the First Session of the Thirty-Eighth Congress.