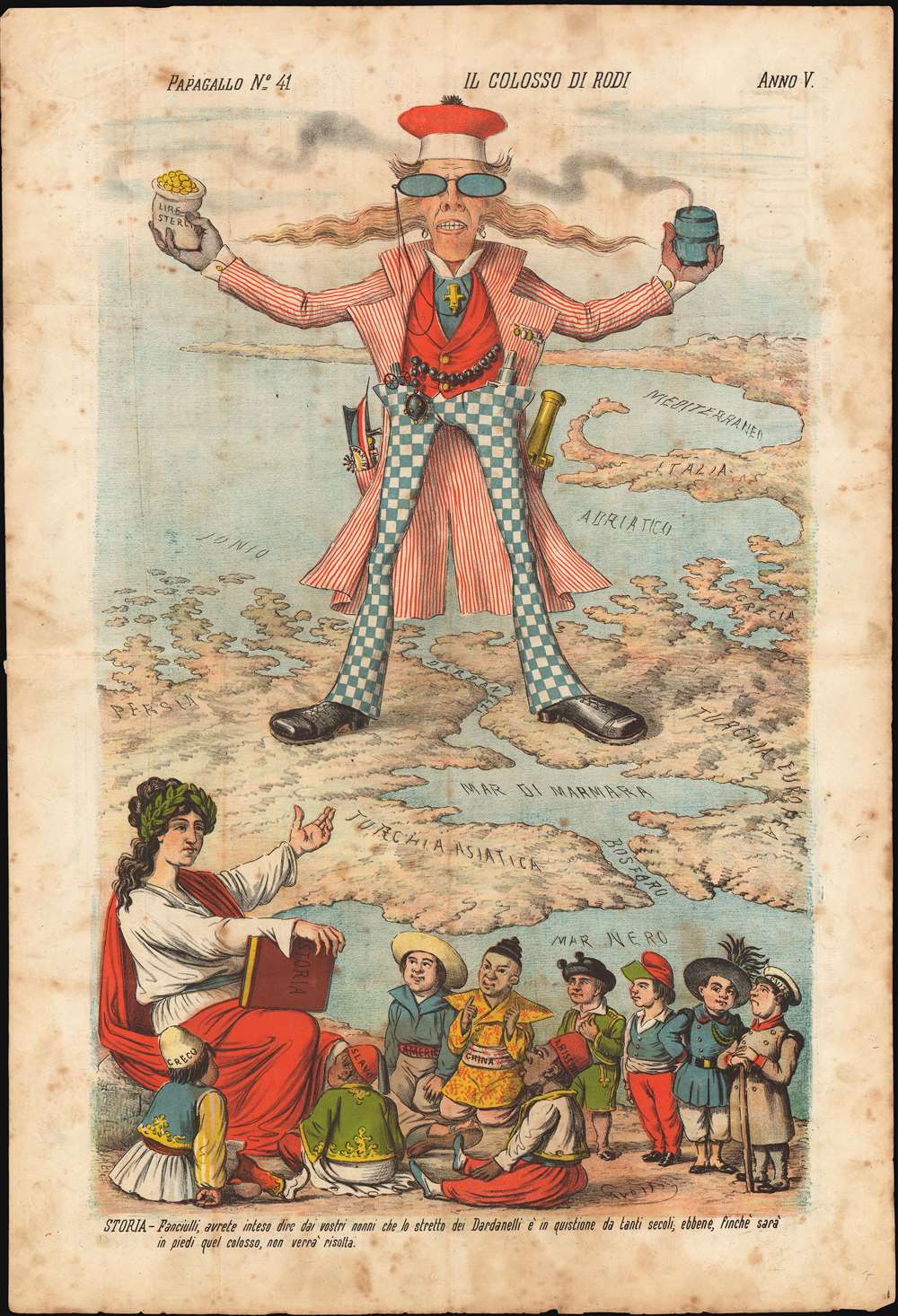 England as Madman Colossus during the Russo-Turkish War.
$3,500.00

An 1877 Italian allegorical representation of the British Empire as a mighty colossus (John Bull) standing astride the Dardanelles facing the Sea of Marmara, the Bosporus, and the Black Sea. In one hand the unusual sunglassed figure of John Bull holds a bag of Lire, in the other, a lit powder keg. Despite his comic appears, the figure is festooned with weapons, among them wealth (bag of gold), grenades, a fleet in one pocket, and a cannon in the other. At his feet, a teacher dressed in ancient Greek robes reveals the story of the Dardanelles to children of different peoples, including Greeks, Slavs, Americans, Chinese, Abyssinians, and various Europeans. A warning to the world against the duplicity of Russia, but also against Britain itself which, while here a savior, nonetheless expresses an 'unhinged' aspect.

Translation of the legend:

The colossus of Rhodes. History, do you see, my children? ... Your ancestors also told you that we could not have the freedom of the Dardanelles ... It is the same today and maybe it will last a long time ... Now it's the colossus, in the future it will be its demolisher who will make obstacles.

This plate references an episode of the Russo-Turkish War (1877–1878). The Ottomans had by this time been soundly defeated by the Russians, but under pressure from Great Britain, Russia reluctantly accepted a truce. Despite the truce, Russian forces continued to move towards the Ottoman capital at Constantinople. The British fleet maneuvered to protect Istanbul and the Dardanelles and deter the Russians.

Satirical plate published in the supplement to the political newspaper Il Papagallo, N. 41, in the 5th year of publication, published in Bologna, Italy. The title and the caption are in Italian. Il Papagallo was a satirical magazine founded in January 1873 by Augusto Grossi (1835-1919), specializing in color-printed caricatures like this one. At its peak circulation reached 50,000, and in 1877 a Parisian version, Le Perroquet, and London edition, The Parrot, were launched. Il Papagallo closed in 1915, when Grossi was 70 years old.

This map is rare with no other examples known. Not in the OCLC.