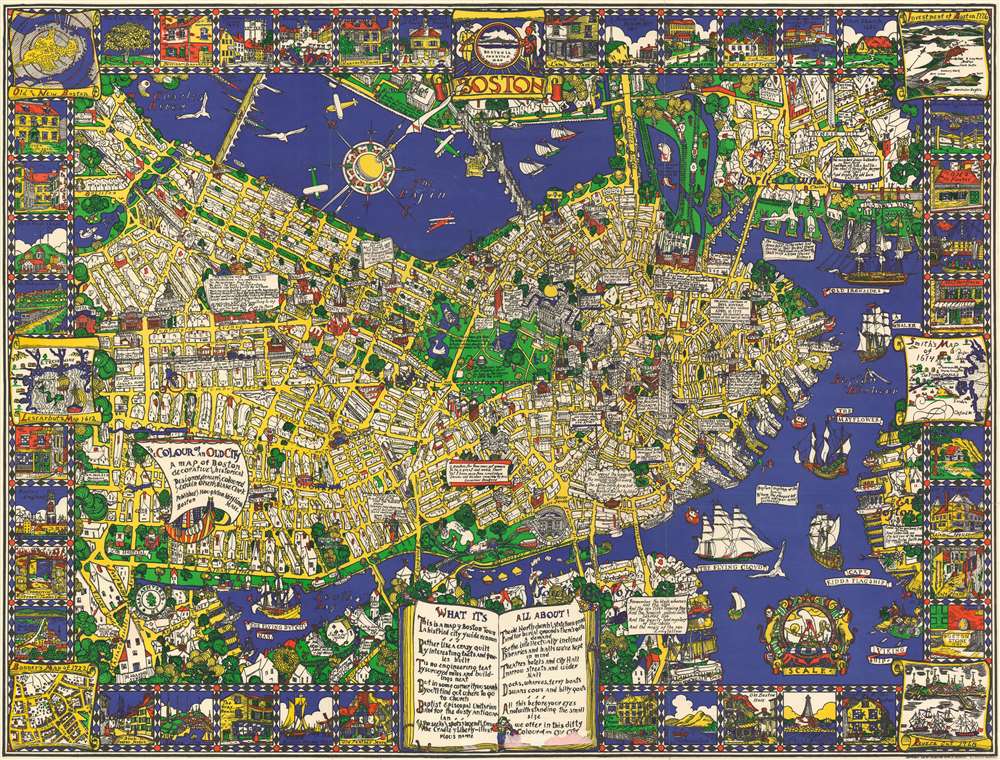 One of the first separately issued pictorial maps published in the United States.
$1,750.00

One of the first separately issued pictorial maps published in the United States, this is Edwin Birger Olsen and Blake Everett Clark's 1926 pictorial map of Boston. Centered on historic downtown Boston, the map depicts the city from Boylston Street to East Boston and from Cambridge to South Boston. Stunningly illustrated, Olsen and Clark blend together all the aspects that have come to be associated with pictorial cartography. Numerous sites throughout the city are drawn in profile, including the State House, the Custom House, North Station, Trinity Church, and Old North Church. Myriad streets are labeled, as are Boston Common and the Fens. Trains are busily steaming into and out of the city, while vintage sailing ships, such as the Mayflower, Captain Kidd's flagship, and the Flying Dutchman ply the waters of Boston Harbor. Airplanes, fairly modern invention that would change life in the 20th century, fly through the air over the Basin and the Charles River. The border consists of vignettes of historical sites and events around the city, including the Boston Tea Party during the American Revolution and a view of Tremont Street in 1798. Six historic maps of Boston are also reimagined along both sides.

This map was created by Edwin Birger Olsen and Blake Everett Clark and published by the Houghton Mifflin Company in 1926. This map is present in five institutional collections at Yale University, Harvard University, the Boston Athenaeum, and the State Library of Massachusetts, and the David Rumsey Map Collection at Stanford University.

Edwin Birger Olsen (1902 - 1996) was an American artist, draftsman, and architect and collaborated with Blake E. Clark on a series of pictorial city plans. Born in New York, Olsen graduated from Harvard in 1923 with a degree in architecture. He then continued his education at the Beaux-Arts Institute of Design in New York City. Olsen and his collaborator Blake Everett Clark (1900 - 1979) had an influential impact on the world of pictorial cartography. Olsen spent a short time teaching in Idaho architecture at the University of Idaho and it was during his time in Idaho that he began to formulate his ideas about pictorial cartography. In the an interview that appeared on page two of the Boston Evening Transcript on April 21, 1926, Olsen stated

On that trip, the idea. That had been buzzing in my head came to a resolution. If you visit a city and want really to taste its flavor, to feel its history and at the same time see it in its modern aspects, you have to take a few auto trips...Then you read eight or ten books and roam a little on your own. I wondered why a map - one map and not two or three supplemented by guidebooks and pamphlets-could not give what I was after, you know, the spirit, the color of a city. A map could be picturesque and yet informative, could avoid the stereotyped network of dull, straight lines, and still keep the city within bounds. Well, I thought it could be done, at least that the combination of Blake and myself...could do it.

Olsen and Blake collaborated on three maps: The Colour of An Old City: A Map of Boston Decorative and Historical, A Kite View of Philadelphia and the Sesqui-Centennial International Exposition, and Map of the City of Washington in the District of Columbia shewing the Architecture and History from the most Ancient Times down the Present. After his time working with Clark on these three maps, Olsen worked for the architectural firms Eggers and Higgins, John Russell Pope, and McKim, Meade, and White and collaborated on such projects as the National Gallery of Art and Jaqueline Kennedy's restoration of the White House.

Blake Everett Clark (1900 - 1979) was an American artist. Born in Boston, Clark studied at Bowdoin and Tufts before moving to Paris to study at some of its leading art academies. He had returned to Boston by 1925 where he pursued a career in marine and landscape painting. Clark soon began collaborating with Edwin Birger Olsen (1902 - 1996) on a series of three pictorial maps: The Colour of An Old City: A Map of Boston Decorative and Historical, A Kite View of Philadelphia and the Sesqui-Centennial International Exposition, and Map of the City of Washington in the District of Columbia shewing the Architecture and History from the most Ancient Times down the Present. After the map of Washington was published, little is known about Clark and his career.