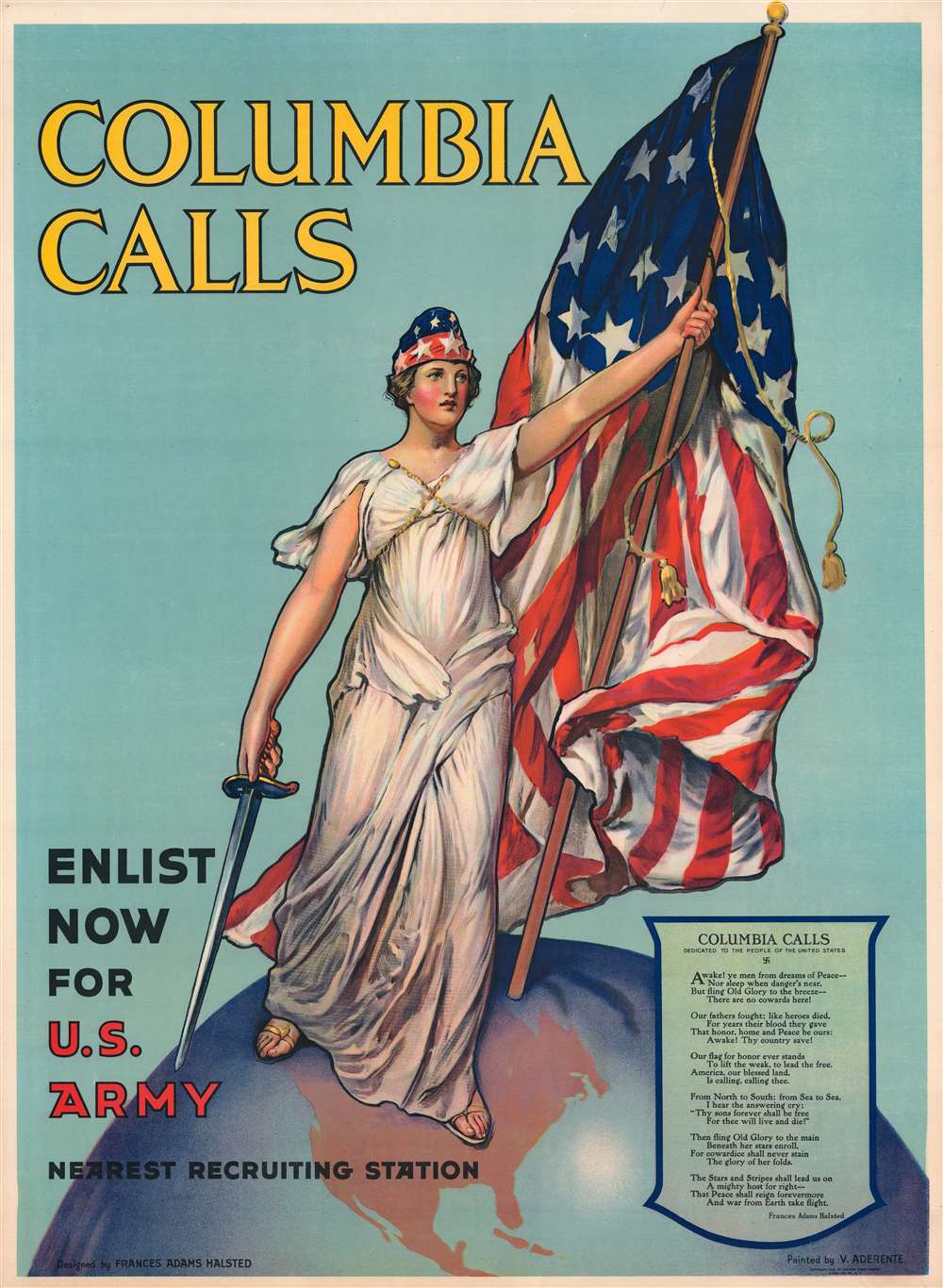 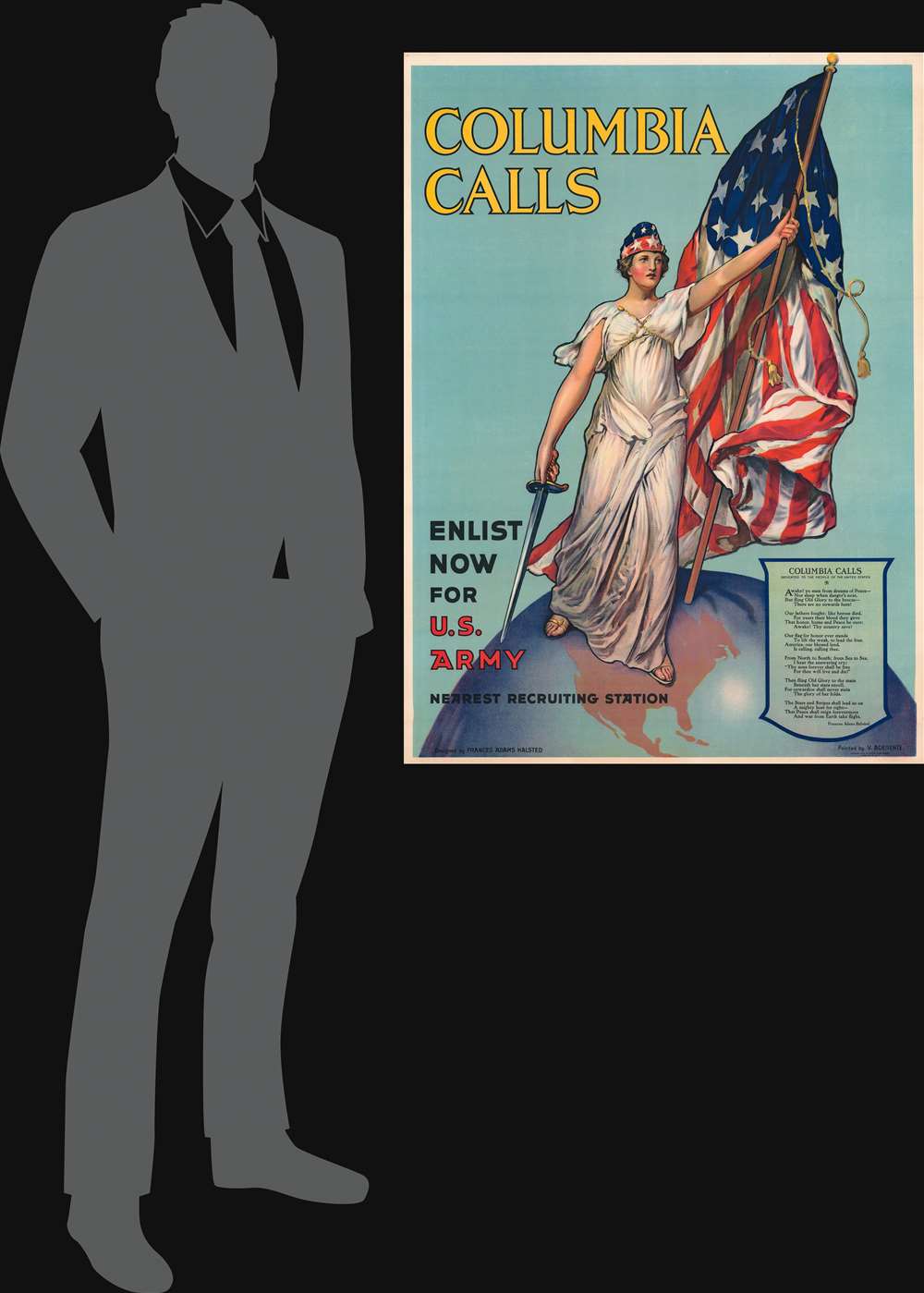 Columbia calling her sons to enlist in the army and defend the United States.
$1,650.00

This is the 1916 Frances Adams Halsted and Vincent Aderente U.S. Army recruiting broadside - an iconic World War I-era American propaganda image. The broadside features personified Columbia holding an American flag and an unsheathed sword standing atop the Earth calling on Americans to enlist. 'Columbia Calls', a poem by Halsted, occupies the lower right. According to the War Department, 'Columbia Calls' was one of the most successful World War I-era recruiting posters.

The Origin of Columbia

Columbia is one of the female personifications of the United States, akin to Britain's Britannia, Italy's Italia Turrita, and France's Marianne. The name Columbia originated from explorer Christopher Columbus's name, with the Latin ending -ia, which is common in Latin names for countries. The first use of Columbia as a replacement for America appeared in 1738 in Edward Cave's The Gentleman's Magazine. Cave published Parliamentary debates in his magazine (which was technically illegal), so he used fictitious place and individual names, and published the debates as Reports of the Debates of the Senate of Lilliput, the country in Jonathan Swift's Gulliver's Travels. From then on, Columbia continued to gain usage in reference to the American colonies, and by the time of the American Revolution, the name had lost its Lilliputian connotations and had become a poetic alternative to America. After independence, Columbia became a popular place name throughout the United States.

Columbia first appeared as a personification of the United States during the Revolutionary War in 1776 in African American Phillis Wheatley's poetry. Columbia's personified image never received a fixed identity, but usually appeared as a woman between youth and middle age wearing a star-spangled dress or other clothing. Columbia appeared in some propaganda during World War I but was surpassed by Liberty. Liberty as a personification of the United States gained in popularity because of Liberty Bonds (which were used to help fund the American war effort) and the Statue of Liberty (Liberty Enlightening the World) and Columbia fell out of use. Columbia Pictures adopted Columbia as its logo in 1924, which is now the most widely recognized use of personified Columbia.

Addressing the Elephant in the Room: Why a Swastika?

Before Adolf Hitler appropriated the swastika as the symbol for fascism and the National Socialist German Workers' Party, the swastika had been used by different cultures for thousands of years. The swastika, or a hooked cross, first appeared at least 7,000 years ago and remains a sacred symbol in Jainism, Buddhism, Odinism, and Hinduism. It experienced a resurgence in popularity at the beginning of the twentieth century and was widely used in Europe, with its most common meanings being as a symbol of good luck and auspiciousness.

This iconic poster was designed by Frances Adams Halsted and painted by Vincent Aderente. This piece is well represented in institutional collections but originals are scarce on the private market.

Frances Adams Halsted (1874 - November 16, 1951) was an American artist. Born in Boston as Frances Adams Clark, Halsted married Edward Bayard Halsted on September 16, 1913. Halsted is best known as the designer for the famed 'Columbia Calls' U.S. Army recruiting poster published during World War I. She also wrote the poem of the same title that appeared on the poster. She founded the Frances Adams House not long after World War I, a foundation with the goal of helping young people to become better citizens and creating more friendship between nations. Halsted had a contentions divorce from her husband in 1925. Very little else is known about her life. Learn More...


Vincent Aderente (February 20, 1880 - June 13, 1941) was an Italian American artist and muralist. Born in Naples, Italy, Aderente arrived in the United States at the age of six with his parents. Aderente studied art in Paris and New York, including at the Art Students' League, the Metropolitan Museum of Art School, and the National Academy of Design. He also worked as an assistant to Edwin H. Blashfield, the 'dean of American muralists', and while working with Blashfield, Aderente helped his teacher on murals in the old Waldorf-Astoria hotel. Aderente also created murals for the Detroit Public Library, the Denver Mint, the U.S. Post Office in Flushing, Queens, the Queens County Courthouse, and Kings County Hospital, among other locations. Aderente also composed World War I-era propaganda, including the celebrated 'Columbia Calls' U.S. Army recruiting poster. Aderente lived in Queens for twenty-seven years and died in Bayside. Learn More...

Very good. Mounted on heavy linen.
Looking for a high-resolution scan of this?