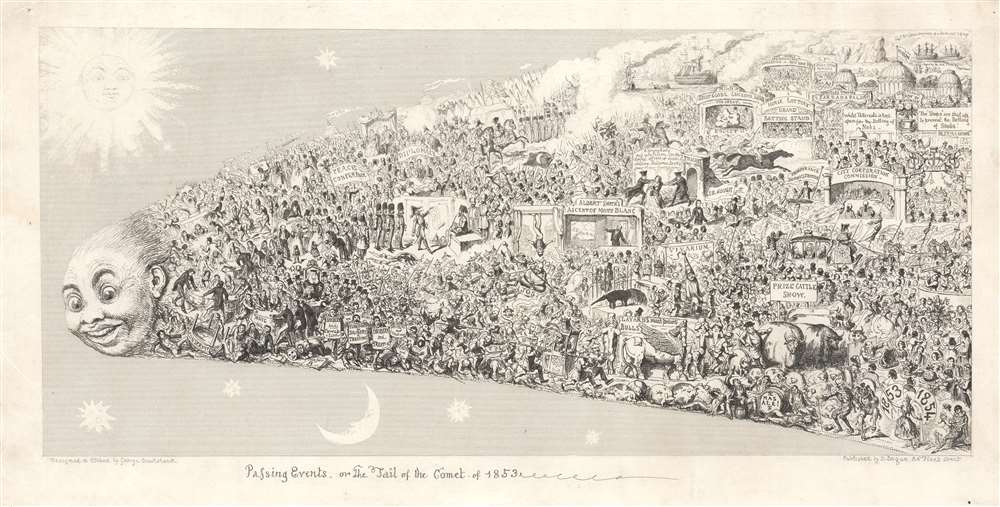 This is a very rare and quirky 1854 George Cruikshank illustration of the events of 1853 densely compressed into the tail of a comet. There were no less than 4 comets in 1853 so this sketch is an apt medium for expressing the happenings of that year, which included the Australian Gold Rush, the European issue of Uncle Tom's Cabin, Smith ascent of Mont Blanc, McCLure's transit of the Northwest Passage, the rise of the spiritualist craze, and more. It was drawn to serve as the frontispiece of the first issue of Cruikshank's publication, George Cruikshank’s Magazine. Cruikshank's magazine survived for only two issues before folding and is best remembered by this, its opening salvo.

Cuthbet Bede describes Cruikshank as this work was being produced:

When I first went into his … there were many specimens of his work around him oil paintings etchings and wood block drawings in various stages of execution He seemed to take a particular pleasure in showing me these and in explaining their designs. The chief work on which he was thus engaged was his wondrous etching of 'The Comet of 1853' which was to form the frontispiece for the projected magazine. On account of its dimensions - the actual plate without the title, 'Passing Events or the Tail of the Comet of 1853' being 15 by 7 inches - it had to appear as a folding plate. It was crammed with hundreds of figures, giving, at one view, an epitome of the leading events of the year -- the Peace Conference, the war between Russia and Turkey, the war in China, the Queen's review of the troops at Chobham, the naval review at Portsmouth, Spirit Rapping, Table Turning, the Derby Day, Betting, the City Corporation Commission, John Cough and the Temperance Demonstration, the Nineveh Bulls, the Zulu Kaffirs and Earthmen, the Anteater, Albert Smith's 'Mont Blanc,' Charles Kean's 'Sardanapalus,' Bribery and Corruption, the Australian Gold Discovery, Mrs. Stowe and 'Uncle Tom,' the New York and Dublin Exhibitions, the Vivarium, Guy Fawkes, Lord Mayor's Day, Wyld's Great Globe, Captain McClure and the Northwest Passage, Miss Cunningham's Seizure by the Grand Duke of Tuscany, the Ceiling-walker, Smithfield Cattle Show, Chiswick Flower Show, Christmas Merry-making, and the Pantomimes -- these are among the subjects that appear in the Comet's Tail, and the gradual progress of which to its ultimate perfection I was so fortunate as to see…

The hundreds of tiny figures in this etching are shown with a distinctness and power of characterization unrivalled by any other artist. I think that he surpassed Callot in this respect, and that no one could approach George Cruikshank in his vigorous life-like and picturesque delineation of surging crowds and packed masses of human beings.

Despite there being four comets that year, this sketch probably refers to the second comet of 1835 (COMET C/1853 L1 / KLINKERFUES; O.S. 1853 III), one of the brightest ever recorded. It was visible to the unaided eye from October through September.

A study of five examples held at the British Library suggest that in addition to being published with the magazine, examples from which have a tri-fold, this illustration was also simultaneously issued independently on heavier paper. The present example shows no signs of being folded and is on strong stock, marking is as the separate issue variant. The publisher was D. Bogue of 86 fleet street. Cruikshank's original manuscript sketch for this print is preserved in the archives of Princeton University.

George Cruikshank (September 27, 1792 – February 1, 1873) was one of the most important British graphic artists of the 19th century. Cruikshank was born in London, the son of illustration Isaac Cruikshank, one of the most important illustrators of the late 18th century. Following in his father's footsteps, George Cruikshank's became a popular caricaturist in the style George Gilray. His political prints were apparently sufficiently scathing that, in 1820, he was bribed £100 not to caricature George VI. He later illustrated for Charles Dickens, producing original artwork for Sketches by Boz, The Mudfog Papers, and Oliver Twist. In 1853, the Comic Almanack, one of Cruikshank's employers, folded. Undaunted Cruikshank went on to found his own magazine, George Cruikshank’s Magazine. The magazine folded after two issues, but is best remembered for the remarkable frontis of the first issue, Passing Events, or the Tail of the Comet of 1853. He was an ardent Temperance supporter and became vice president of the National Temperance League in 1856. Cruikshank had lifelong extramarital affair with his former maid, Adelaide Attree, with whom he fathered 11 illegitimate children. His obituary in Punch read, 'There never was a purer, simpler, more straightforward or altogether more blameless man. His nature had something childlike in its transparency.'

Very good. Blank on verso. Minor pinholes in all corners.