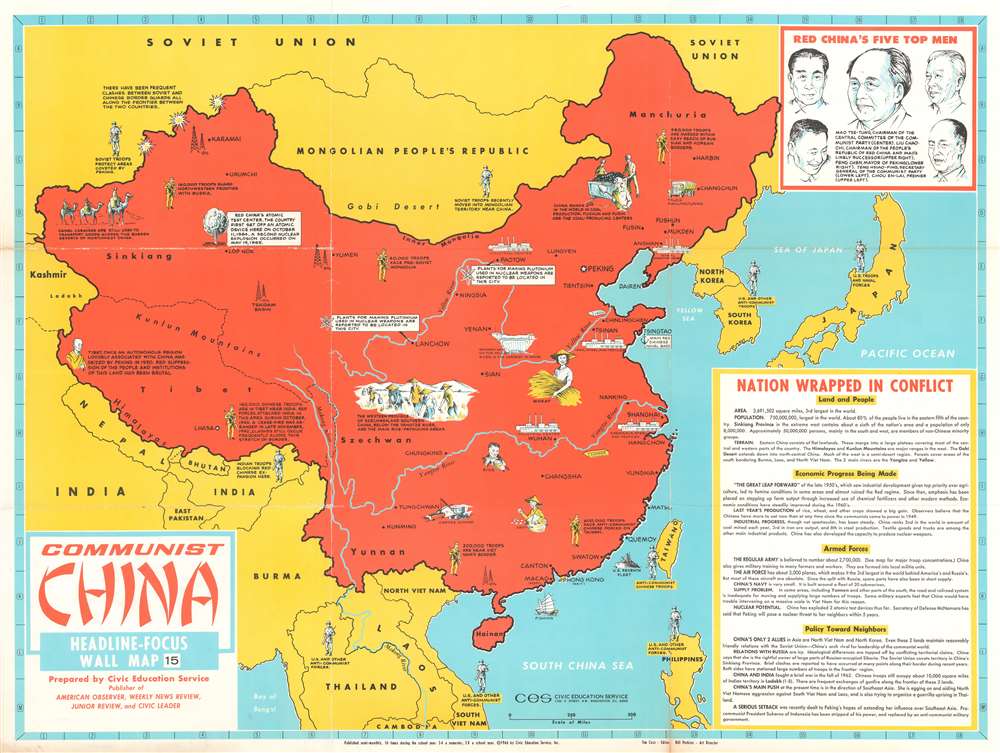 This is a 1966 Civic Education Service pictorial map of China, more specifically 'Communist China'. Created just before U.S.-China relations began thawing in the 1970s, the entirety of China is shaded red, the color most associated with Communism. Pictorial vignettes highlight Chinese industry, with particular interest paid to mining and manufacturing. Chinese progress in the realm of nuclear weapons is also prominently noted. An illustration of an atom marks industrial plants suspected of making the plutonium necessary in the development of these weapons, and a mushroom cloud, the most infamous image associated with nuclear weapons, marks the nuclear test site near Lop Nor. Icons of soldiers, situated throughout China and all of the surrounding countries, reinforce the tense military situation in the region. Short texts also explain that Soviet and Chinese forces had clashed along the border separating the two countries, as have Chinese and Indian troops along their mutual border. 'U.S. and other anti-Communist forces', essential to the American policy of 'containment' are stationed in Thailand, South Vietnam, Taiwan, the Philippines, South Korea, and Japan. A text box entitled 'Nation Wrapped in Conflict' provides details for the viewer about the population and geography of China, as well as the economic, military, and diplomatic situation in China.

This map was created and published by the Civic Education Service in 1966. The OCLC records examples of this map as being part of the institutional collection at Cornell University. An example is also part of the David Rumsey Map Collection.