1790 Manuscript Map of Lake Como and Lake Lugano after Fornari 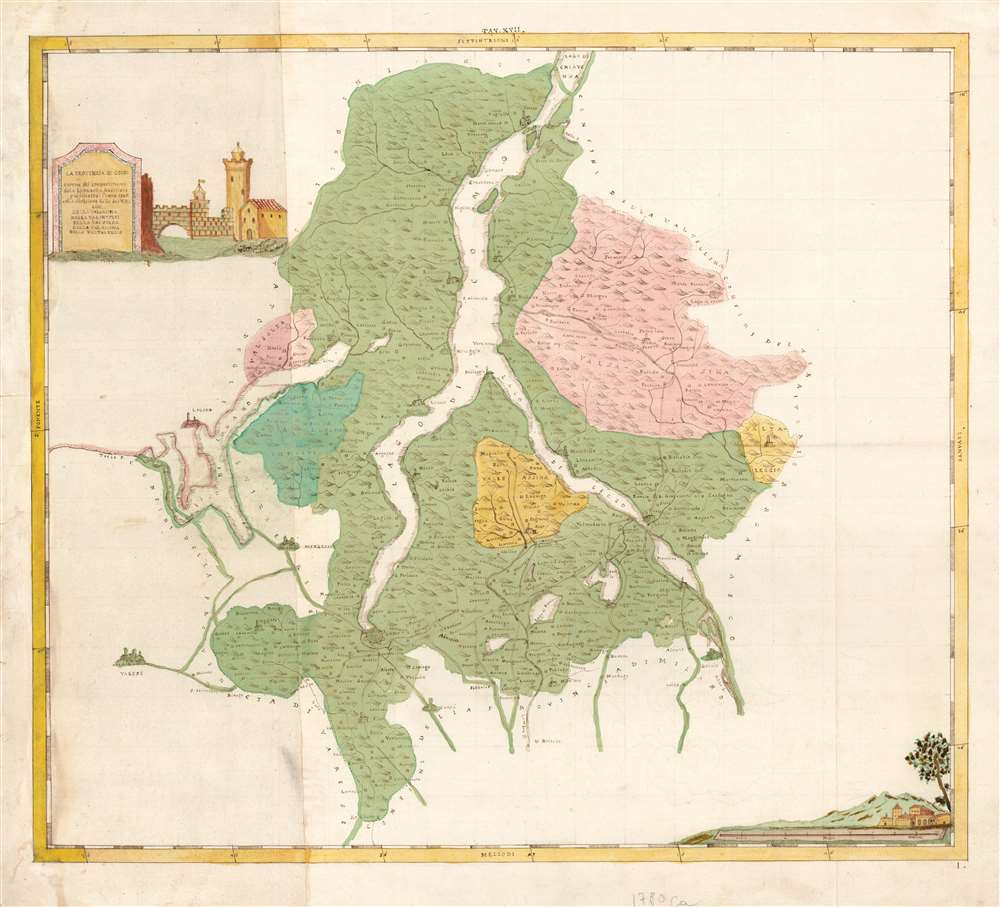 1790 Manuscript Map of Lake Como and Lake Lugano after Fornari

This is a beautifully drawn, inked, and colored c. 1790 manuscript map of Lake Como in Lombardy, hailed as the most beautiful lake in the world. This map's author is unknown, but the cartographic detail is derived from the scarce 1790 work of the Olivetan monk Mauro Fornari. The map embraces all of Lake Como, Lake Lugano, and the smaller lakes in their immediate vicinity. It reaches as far north as the Lago di Mezzola (Chiavenna) and as far south as Rovellsca; the western and eastern extents correspond with the upper reaches of the River Tresa, and the commune of Vedeseta, Valtaleggio. As is suggested in the map's extended title, it highlights - employing tasteful hand color- the five Valleys forming Como's primary divisions: Valsasina, Val Intelvi, Val Solda, Valassina, and Val Taleggio.

The map goes beyond student work in its uniformly crisp and attractive presentation. Mountains are shown pictorially; rivers are clearly delineated; coastlines are hachured. Small villages and communes are added simply, but larger towns receive a more pictorial treatment; Como for example is drawn as a walled, fortified city. The map's lettering is uniformly clear and legible. Its title cartouche and its scale cartouche are beautifully decorated with architectural views evocative of the region.

A Richly Detailed Map of a Popular Retreat for the Rich

Lake Como has been a popular haven for the aristocratic since the Roman era. Many of the place names found here can be tied to villas and palaces of antiquity. Tremezzo, site of Villa Carlotta; Cernobbio, site of Villa d'Este; Bellagio, which would be home to the Villa Melzi d'Eril, among others.

The title of the map explains that it is in accord with the 1786 reorganization by Emperor Joseph II of Austrian Lombardy, which created the provinces of Como, Pavia, Varese, Lodi, Cremona, and Milan. This reorganization was published by Imperial decree on September 26, 1786, although that publication did not include maps.

With minor exceptions, the manuscript map's detail corresponds closely with that of Mauro Fornari's Provincia Di Como a norma del compartimento della Lombardia Austriaca pubblicato si l'anno 1786. This printed map was engraved by Domenico Cagnini in 1789, and was printed in 1790. In that format - significantly smaller, and comparatively Spartan with no decorative cartouches - the map accompanied five other newly-created provinces of the short-lived Austrian Lombardy.

The unanswerable question of the authorship of this superb manuscript leaves open the question: was this a beautifully-embellished, larger copy of the 1789 Cagnini engraving of Fornari's map? Or, was it a manuscript produced prior to the printed map - which certainly would, in that case, have to be the work of Fornari himself?

Key Differences with the Cagnini

Beyond the absence of decorative flourish in the printed map, there are two obvious differences between it and the present map: The copperplate ends somewhat to the south, omitting the portion of Lago di Mezzola; the manuscript shows the complete coastline of Lago di Lugano, whereas the western portion of the lake is unfinished in the copperplate - the map of the Province of Varese continues where this one leaves off.

By 1790, Joseph II was dead, and in 1791 his successor Leopold II altered the subdivisions of Austrian Lombardy again, making these maps obsolete. Indeed, in 1796 the whole region was absorbed into Napoleon's Cisalpine Republic, rewriting the boundaries yet again. The ephemerality of this mapping likely explains the scarcity of the printed maps from this period, which are rare both on the market and institutional collections. This is a unique opportunity to acquire a one-of-a-kind piece.

Mauro Fornari (fl. 1730 - 1797) was an Italian monk and cartographer. He was a member of the Olivetan order, and appears to have lived and worked in Milan. His only printed cartographic works are a set of six maps of the state of Milan (Como, Cremona, Lodi, Milano, Pavia and Varese) engraved by Domenico Cagnini. The individual maps appear to be quite scarce, only appearing in a few institutional collections. The full set seems only to be held in the Herzogin Anna Amalia Bibliothek Klassik DEHAA. A further work attributed to Fornari, though not apparently published, is recorded in the Convento di S. Marco: a 6-sheet Pianta di Milano. Learn More...