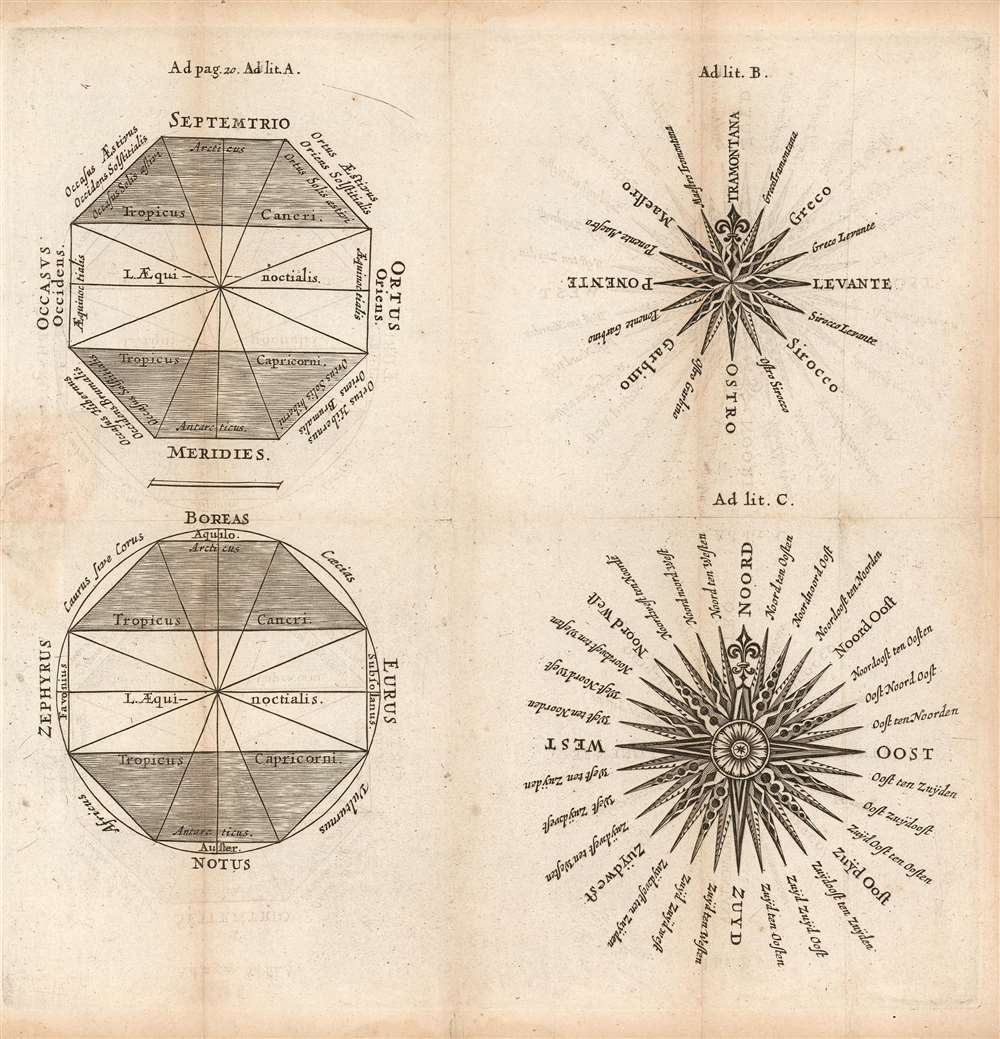 This is an attractively-engraved plate comparing four different conventions in naming the cardinal directions. It was printed in a 1661 Elzevir edition of Philipp Cluver's introduction to geography. Cluver's work appeared in editions by several different houses, and with maps of wildly differing characteristics. Presented here are four separate diagrams, each exemplifying a different, common convention for directional toponomy.

To the upper left, resembling a zonal map (in that it shows the equator and the tropics) is a diagram showing the classical Latin names for the directions; Septemtrio, Ortus, Meridies and Occasus and their intermediate terms. These names are typically based on astronomical observations: Septemtrio refers to the seven stars of the little dipper, the constellation containing the North Star. Meridies refers to the position of the midday sun, as seen in the northern hemisphere. These were in common use by the 1st century CE, but since Latin remained the scholarly language well into the eighteenth century, the terms persisted on maps throughout the history of early printed maps. Furthermore, the debt owed Latin by French and Italian would mean that the similar terms (Septentrionale, or Settentrionale) would commonly appear on maps printed in the vernacular. But as the meanings of these terms were based on observations possible only in the northern hemisphere, they began to lose their relevance once mariners crossed the Equator.

The lower diagram on the left, designed on a similar model to the one above it, is used to illustrate the winds as named after the classical Greek gods, the Anemoi. These wind gods, each assigned a cardinal direction from which their wind came, were the progeny of Eos and Astraeus, and all were subject to the god Aeolius. The Anemoi appear on many early maps as wind heads.

On the upper right is an elegant, sixteen-point compass rose showing the traditional Italianate names for the eight winds and their intermediate derivatives. The names here were invented by medieval (mainly Genoese, Venetian and Provençal) seafarers working the Mediterranean. These traditional names of the eight principal winds - Tramontana, Greco, Levante, Scirocco, Ostro, Garbino, Ponente, and Maestro - were references to winds in a direct context to the Mediterranean. The Tramontana blew from the North, 'across the mountains' of the Alps. Greco blew from the direction of Greece, and so on. These directional terms, while meaningful for sailors of the Mediterranean, retained little relevance for navigators outside these waters.

The 32-point compass rose shown in the lower right uses the now-familiar convention of North, South, East and West, with intermediate stages marked as 'north by east.' 'northeast by north' and so on. In this instance, the terms are written in Dutch - after all, this was an Amsterdam printing. These directional terms were divorced from fixed geographical or astronomical reference points, and thus were relevant anywhere on the globe. These standard terms for navigators throughout the world.

None of the plates appearing in the Elzevir edition of Cluver's Introductionis in universam geographiam are signed by an engraver. For a miniature map, this is not unusual - very often this work was executed by journeyman engravers, who would not have the right to apply an imprint. However, it is very possible that the matriarch of the Elzevir firm - Eva van Alphen - did this work herself. She is known to have been an accomplished engraver, having been credited with a beautiful Dutch Bible map after Visscher (Orbis Terrarum Tabula Recens Emendata et in Lucem Edita per N. Visscher). When their edition of Cluver was produced, Eva's husband Jean was in failing health and upon his 1661 death she took over direction of the firm. The excellent work here may well be hers.

The plate was engraved for inclusion in Philipp Cluver's Introductionis in universam geographiam, as early as 1659. Though he did not live to see it in print, Cluver's text became one of the most popular of the seventeenth century, printed in many editions from 1624 through the 18th century. This example appeared in a 1661 edition, published by the house of Elzevir. This edition of Cluver is noted in 15 examples in OCLC although the separate plate is not catalogued.