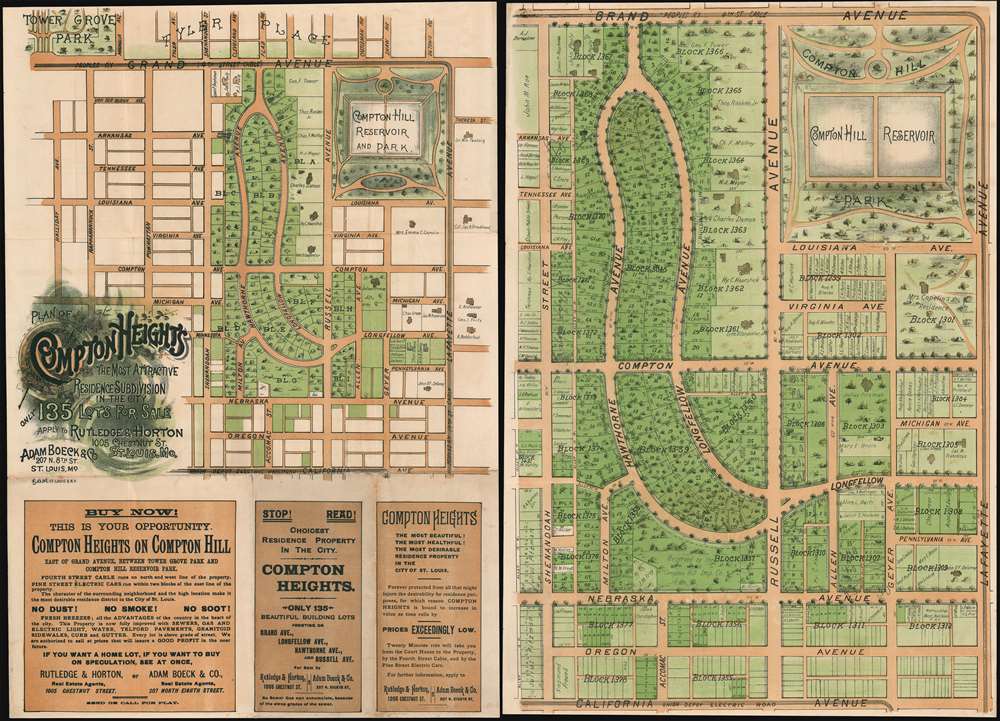 One of the first planned communities in the United States!
$1,500.00

A rare c. 1895 chromolithograph view promotional real estate map of Compton Heights, Saint Louis, Missouri. Compton Heights is one of the first planned communities int the United States and one of the most historic and beautiful neighborhoods in Saint Louis. The promotional consists of two maps, printed back-to-back on a single sheet. The title side features a smaller map of Compton Heights covering from Tower Grover Park to the Electric Railroad on California Ave, and from Halliday Ave to Layfette Ave. Below the map, there are advertising promoting the virtues of Compton Heights and the real estate agents, Boeck, Rutledge, and Horton, from whom the properties could be acquired. The verso features a much large map, identifying individual lots as well as existing properties and the property owners.

Located in Saint Louis, Compton Heights was one of America's earlies planned residential developments. The 'Compton Hill Improvement Company' was founded in 1888 by wealth real-estate speculators, among them Mississippi River shipping magnate Henry C. Haarstick (1836 - 1919) and the Prussian born landscape designer, Julius Pitzman (1837 - 1923). Comprimising some 250 acres, Compton Heights was intended to represent the apex of luxury and modernity, with above-street grading for each lot, sewers, gas and electric lights, water, Telford pavements, Granitoid sidewalks, and more. Pitzman laid out the serpentine streets with architectural foresight, ensuring that each property had a pleasant line of sight, and easy access to communal resources. The properties also came with, at the time, unique restrictions meant to preserve the character of the neighborhood, Most of these regulations are still in effect and helped to preserve the integrity of the neighborhood during the Great Depression and Post-War decades. Today Compton Heights is one of Saint Louis's most beautiful neighborhoods.

This map was first printed by the Saint Louis firm Buxton and Skinner in 1893, shortly after the Compton Heights development offered for sale. At this time only a handful of homes had been built and some 160 lots remained unsold. The map was reprinted for a second sales drive in 1895, as here, wherein the 'Buxton and Skinner' imprint was removed and the available lots changed to 135. The realters also changed from Harstick and Pitzman, to Boeck, Rutledge and Horton. Including the present map, there are but two known surviving examples of the promotional map, and only one of the present issue. The only other known example is in the Missouri Historical Society Library.

Buxton and Skinner (1878 - 1999) were stationers and lithographer active in Saint Louis in the late 19th and early 20th centuries. The firm was founded by Charles Mather Skinner (November 3, 1847 - January 13, 1929) and Oliver W. Buxton (1835 - 18??). Little is known of Oliver Buxton save that he was a clerk at R. P. Studley and company as early as 1866. Skinner was born in New York and first became involved in the printing business in 1865 in Chicago. He relocated to St. Louis in 1869, taking work with the firm of R. P. Studley and Company. Studley and Company closed its doors in 1878 and their business was taken over by staffers Buxton and Skinner, who renamed after themselves. The firm served initially as a stationer with just two small water driven presses. Their offices were initially located at 219 and 221 Chestnut Street, St. Louis. These offices burnt to the ground in December of 1880, causing considerable loss, and forcing them to relocate to new offices at 215 Chestnuts Street, at the same time they formally incorporated. Buxton retired in 1886, at which point his shares were acquired by Charles Skinner, but the name, Buxton and Skinner, remained. In 1898 they added a new printing facility at 306-308 North Fourth Street. By this time, it had become one of the largest printing concerns in the United States. The firm continued to prosper through multiple generations of the Skinner family. In 1999 Buxton and Skinner was acquired by the conglomerate Mail-Well. Learn More...

Very good. Map exhibits a few archival reinforcements on the title side.
Looking for a high-resolution scan of this?